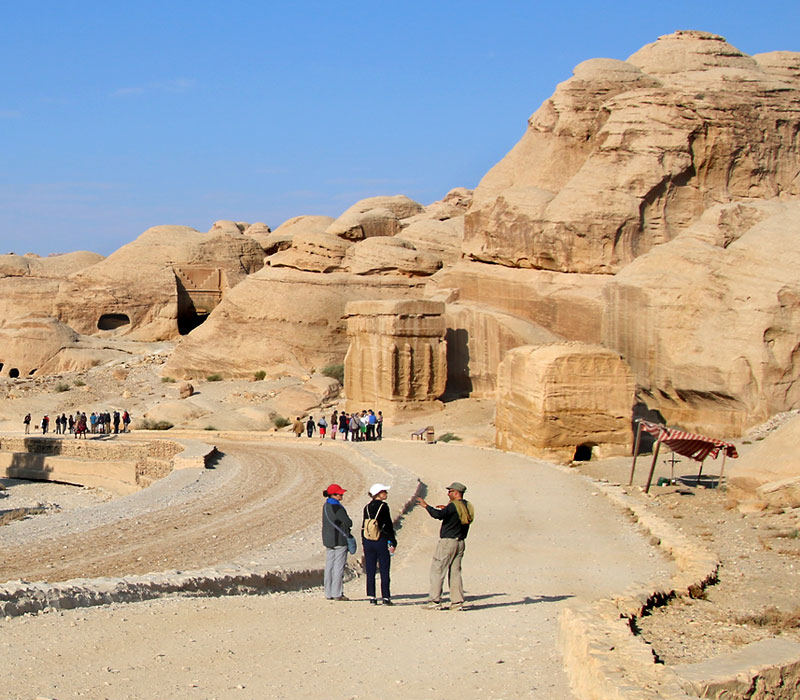 The Bab as-Siq is more than just a "gate to the Siq", the deep rocky gorge through which one walks into the valley of Petra. Along the 900 m long path following the Wadi Musa extends a necropolis with exceptional rock tombs, which testify to the importance of this access from the ancient settlement of Gaia to the capital of the Nabataeans. There are 85 monuments and 15 inscriptions registered in the area (L. Nehmé).

Our photo tour with summarized information from archaeological research begins at the three monumental Block Tombs, often called "Djinn Blocks". We also show them from an unusual aerial perspective, making the graves on and behind two of the blocks clearly visible.

Hardly anyone climbs over the divided track for horses and carriages and through the dry stream bed to visit the small Snake Tomb on the other side. But it is worth the effort because of the mysterious relief wall with two snakes threatening a quadruped animal, and a horse carrying a betyl.

A little further on you will see two outstanding rock-cut buildings, staggered on top of each other, differently designed and yet belonging together: the Obelisk Tomb, unique in Nabataean architecture, and below it, the Bab as-Siq Triclinium. The prominently placed consecration inscription on the opposite side of the path names the founder of the tomb.

Despite its good accessibility, the Aslah Triclinium Complex on a plateau directly opposite the entrance of the Siq is a hardly visited attraction. The complex includes the Triclinium, the oldest dated monument of the Nabataeans in Petra, numerous votive niches, a rock chamber with 10 graves, cisterns and over 50 pit graves in several rocky hillock 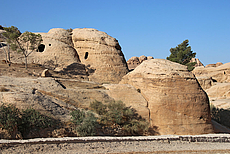 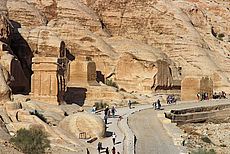 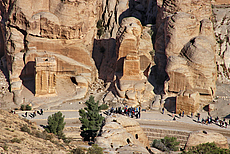 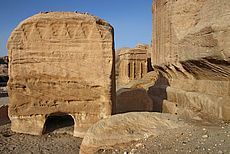 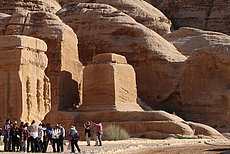 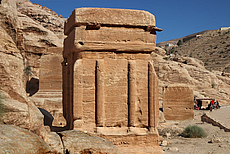 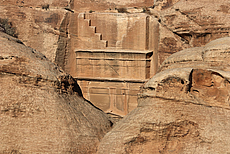 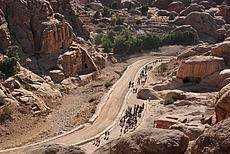 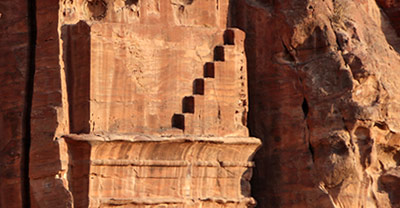 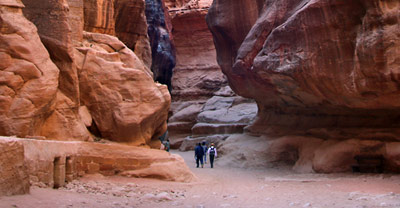 Ancient settlement under today's tourist village Wadi Musa. Often mentioned in Nabataean inscriptions, e.g. as home of the god Dushara and the goddess al-Kutba. Thanks to abundant water resources and fertile soils, Gaia was an important place of supply for Petra. From the particularly abundant spring at the entrance to the valley, a kilometre-long water channel was built down into the valley of Petra. According to the (later) legend, it was the spring that opened when Moses, who is also revered by the Muslims, hit the rock with his stick - hence the name Ayn Musa (Moses spring) and Wadi Musa. Archaeologists have found remains of residential areas with sophisticated hydrological systems under the modern site.