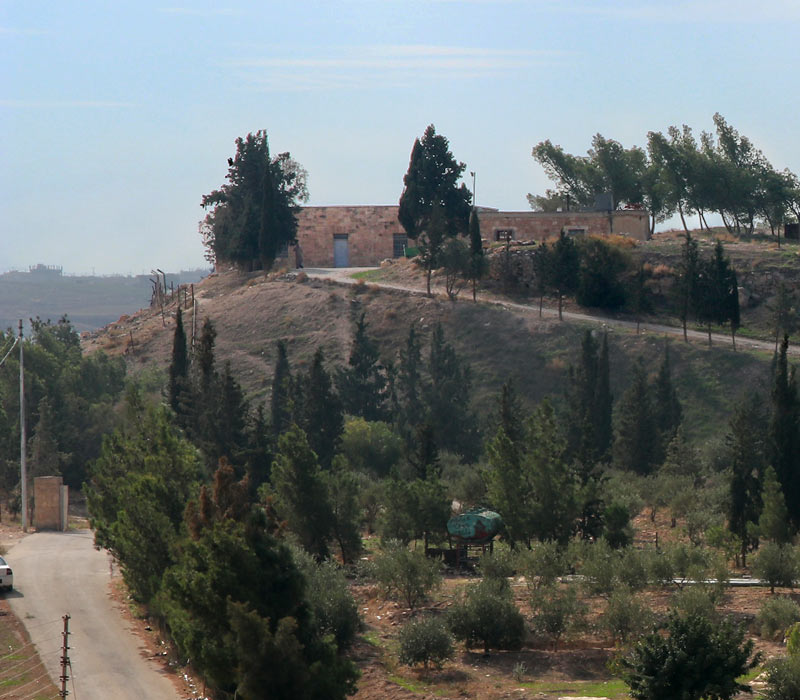 Al-Mukhayyat is the southern peak of Mount Nebo, and the place identified as the ancient town of Nebo. The 2 km detour to Khirbet al-Mukhayyat on the road between Madaba and Mount Nebo's Moses Memorial is greatly rewarding, not only because of the beautiful hilly landscape with farms and orchards.

Three Byzantine churches from the 6th century have been excavated at the top. While the mosaics of two of them are on display at the Moses Memorial, the well-preserved mosaic floor of the Church of SS Lot and Procopius (from 557 A.D.) can be admired there, protected by a stone shelter.

This mosaic is one of the finest in Jordan, distinguished by the richness and harmony of its composition and chromatic effect, and the lively representation of daily activities, such as hunting, herding and wine making. See details and more information on the image pages. 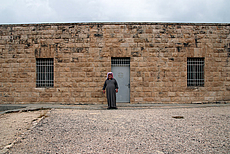 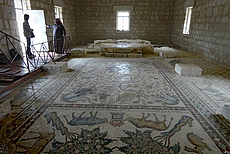 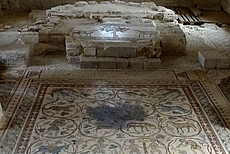 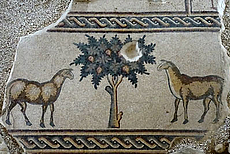 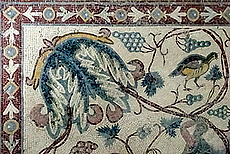 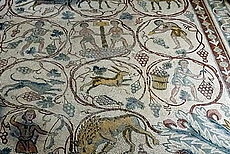 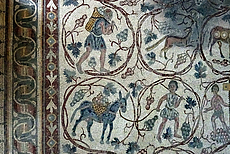 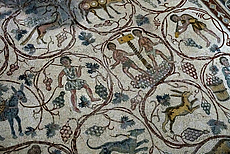 The ancient Town of Nebo is first mentioned in the inscriptions of the Mesha stele (c. 830-805 BC). It states that the Moabite king Mesha conquered Nebo and eliminated the Israelite cultic presence there. Archaeological work at the site has also revealed vestiges of an Iron Age (9th-8th century BC) settlement.

Mukhayyat is best known for the archaeological remains of the churches from the Byzantine period. Although the monastery at Mount Nebo (Siyagha) was the main destination for pilgrims to honor the prophet Moses, there was an earlier village at Mukhayyat in the 4th Cent., whose inhabitants are mentioned by Peter the Iberian as the founders of the church at Siyagha.

The churches built at al-Mukhayyat and surroundings indicate that the late 5th and 6th century A.D. were a period of prosperity. The oldest one, the Church of SS Amos and Casiseos dates from the 5th Cent. A.D.; the Church of St George is dated by inscription to 536 A.D.; and the Church of SS Lot and Procopius, 557 A.D.

Already in the 7th century, the site appears to have been abandoned. This can be concluded by the little iconoclastic damage that the mosaics have suffered, which means that the churches were not in use anymore at the beginning of the 8th century.

Occupation only resumed during the Late Ottoman period, sometime at the end of the 19th century.

At the beginning of the 20th century, the territory of the village of Nebo belonged to the Bedouin tribe of al-Ghaneimat.

The name Khirbet al-Mukhayyat was first mentioned among Western archaeologists in the writings of Felicien De Saulcy in 1863. Alois Musil was the first to systematically explore and describe it in 1901, creating a topographic plan.

The first mosaic discovered at Khirbet al-Mukhayyat was the one of the Church of SS Lot and Procopius in 1913, during the construction of the house of Ahmad el-Wkhyan.

After al-Mukhayyat and Siyagha were acquired by the Franciscans of the Custody of the Holy Land in 1932, systematic excavations and conservation activities have been undertaken by archaeologists of the Studium Biblicum Franciscanum of Jerusalem. In 1935, a stone shelter was built to protect the mosaic floor of the Church of SS Lot and Procopius.

In 1986, excavations uncovered the mosaic in the Chapel of the Priest John, part of the Church of Amos and Casiseus (now on display at Mount Nebo Memorial).

A stone building protects the mosaics of the Church of SS Lot and Procopius. In the house beside it visitors can ask for the guard to open it.

© Texts and photos are protected by copyright.
Compilation of information, editing, translations, photos: Universes in Universe, unless otherwise indicated.