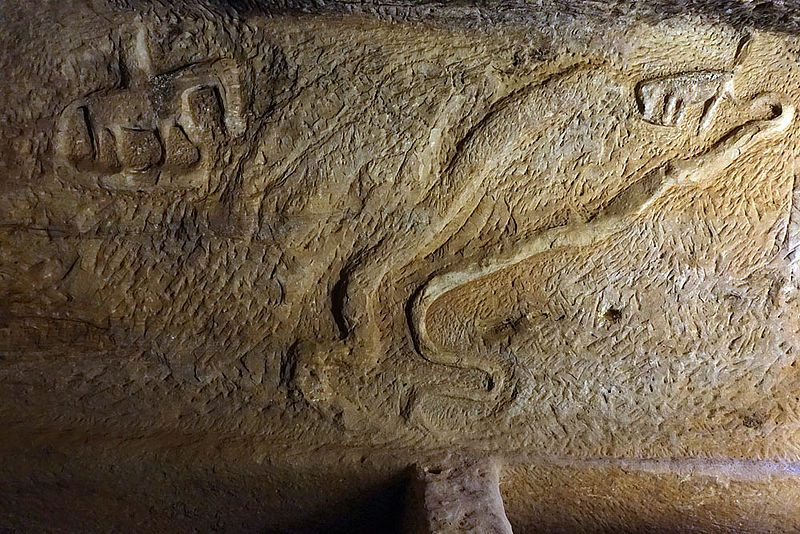 Hardly anyone climbs over the "race track" for horses and carriages and through the bed of Wadi Musa to have a look at the small Snake Tomb on its southern side. But the effort is worth it, because the cave interior has a very unusual wall relief.

Newly built steps lead to an open passage with two nefeshes carved on its right wall, one with a wide foot and a kind of flower just below the top, and a smaller spear-shaped one.

It must have been the burial site of an extended family, because there are twelve pits cut out of the cave's floor very close to one another. In order to see the two reliefs to the right of the entrance, one has to step over them.

In the first relief two 1.53 m and 1.62 m long snakes crawl from bottom to top across the wall. The right snake has grabbed the rear leg of a quadruped animal which has its tail stretched upwards, while the left snake approaches its head.

The mysterious scene can't be easily deciphered. From the context of the depiction of snakes in Nabataean imagery, it can be assumed that here, too, they appear as grave guards or are meant apotropaically (intended to prevent evil).

The second, smaller relief shows an approximately 50 cm long horse with clearly recognizable bridles, which carries a high cube, interpreted by scholars as a betyl. It is proven that such idols representing the divine were carried by the Nabataeans in processions.

It was not until 1907 that the German researcher Gustaf Dalman was made aware of the tomb. Therefore it is not included in the earlier catalogue of Brünnow & von Domaszewski, and for this reason registered as D 47.