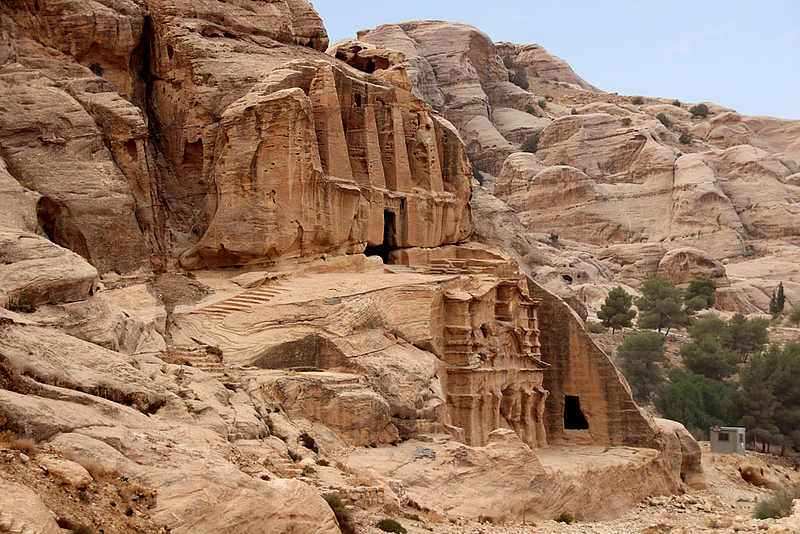 This burial complex is unique in the Nabataean architecture. It consists of two very different rock-cut structures, both of which were built at the same time during the reign of Malichos II (40 - 70 A.D.), and were coordinated in their functions. The inscription on the opposite side of the pathway indicates the owner - see previous page.

The name Obelisk Tomb is misleading, because the four pointed pillars (the highest measuring 7 m) are nefeshes, which have a different meaning than the ancient obelisks. They probably embody those buried in the four side graves of the inner chamber. The head of the family seems to be depicted in the relief of a standing man with a long robe at the top center of the façade. His burial place was in the floor of the large arched central niche at the back wall of the burial chamber, which is about 6 m wide, 5.70 m long and almost 4 m high.

On the right in front of the 16 m wide façade a small stibadium (semicircular dining bench) was carved into the rock platform for rituals in honour of the deceased. The deep T-shaped basin next to it is a later addition, perhaps for collecting rainwater.

Close to the staircase, which leads up to the left side of the complex, there is a cistern at half height.

Information about the Bab as-Siq Triclinium on the image next page.