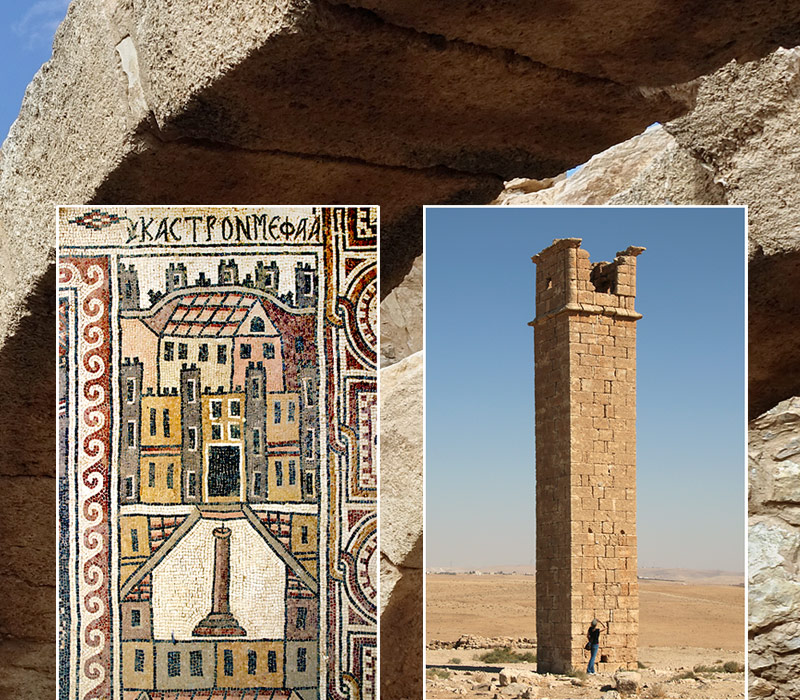 From the Roman fort Kastron Mefa'a at the Limes Arabicus and a settlement north of it, a Christian town and important place of pilgrimage developed in the 5th century. Many of the 16 churches have been decorated with mosaic floors, of which some excellent examples can still be seen. Particularly noteworthy is the mosaic floor of the Church of Saint Stephen with its representation of towns in the region.

About 1.3 km to the north there is a 14 meter high Stylite tower. It is probably the last remaining building of this kind, on which strictly ascetic pillar-saints retreated.

Because of the outstanding universal value of the Roman, Byzantine and early Islamic testimonies from the late 3rd to 9th centuries, Umm er-Rasas was included in the UNESCO World Heritage List in 2004. 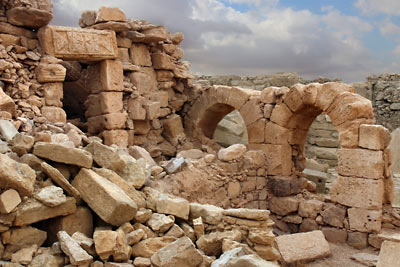 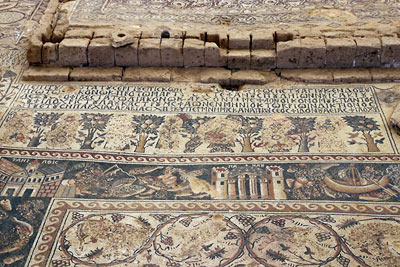 Four churches and adjacent buildings under a huge shelter. Spectacular mosaics from the 6th to 8th centuries. 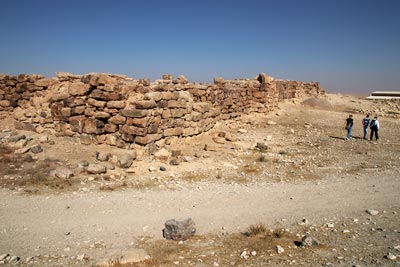 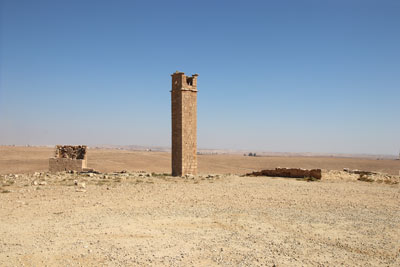 A 14 meter high tower on which ascetic pillar-saints retreated. Around it, a church, square tower, cistern, quarry.

The toponym was already known to the Roman and Arabic sources and to the Bible. Eusebius of Cesarea mentioned that a unit of the Roman army was stationed on the edge of the desert at Mephaat in the 4th century A.D. (Onomasticon 128, 21), a locality which the historian identifies with the Levitical city of refuge of Mepha'at in the territory of the tribe of Reuben on the mishor Moab (Joshua 13, 21; 21, 37; Jeremiah 48, 21).

The Notitia Dignitatum, a state handbook or auxiliary book of the Roman Empire for the internal use of Roman authorities from the 5th centrury AD, stated that auxiliary cavalry troops of the Roman army were stationed in the camp of Mefaa on the edge of the desert under the command of the Dux Arabiae.

The locality of Mefaa is recorded by the Arab historian el-Bakry as a village of the Belqa' of Syria.

The name Umm er-Rasas [also: ar-Rasas] is related to the Arabic root Rass, Rassas, indicating the action of putting something on top of something else in perfect alignment. Thus is a term which indicates a well-built wall, and it is a good indication of the antiquity of the locality. This interpretation has replaced a previous one based on the Arabic word rasas (lead), interpreting this as related to the presence of lead sarcophagi seen somewhere on site - but no presence of these has been confirmed in excavations.

© Compiled by Universes in Universe

Roman period
The castellum at the Limes Arabicus was probably built at the end of the 3rd/beginning of the 4th century as one of the military camps and forts erected or expanded under Emperor Diocletian (ruled 284 to 305) to protect the eastern border and the trade routes from Arabia to Syria and Palestine.
Historical sources mentioned that a unit of the Roman army was stationed on the edge of the desert at Mefa'a in the 4th century AD.
A first settlement in front of the northern gate of the Roman fort may have already existed during its military use.

East Roman / Early Byzantine period
When the East Roman / Byzantine Empire gave up more and more bases at the Limes Arabicus, from the 5th century onwards, and had the border region protected by allied Christian Ghassanids, the garrison was also demilitarized. Within the walls, a densely built civil settlement was developed, which gradually abolished the originally rectangular layout of paths and buildings.
The area north of walled castellum area grew into a splendid town, which became an important place of pilgrimage.

Byzantine era
During the time of Bishop Sergius as the head of the diocese of Madaba (576 - 602 A.D.), to which Mefa'a belonged, most of the 16 churches known today were built and paved with mosaic floors (see the photo tour).
The city was an ecclesiastical focal point that is expected to have received visitors who came to pray or attend masses in the churches. The Stylite tower must have been an important pilgrimage destination, visited by a huge number of believers to consult the stylite monk, ask for his prayers and to achieve his blessing.

Islamic period
After the Islamic conquest in 636 (Muslim victory in the battle of Yarmouk), the Christian and monastic character of Mefa'a did not change. Churches continued to be built during the Umayyad and Abbasid rule, up to the end of the 8th century.
The church of Saint Stephen with its richly paved mosaic floor including the names of many donors was completed in 785. This proves that at the end of the 8th century a well organized and artistically vital Christian community still existed at the site.
Mefa'a (Umm al-Rasas) as a whole seems to have declined seriously (or ended) in the 9th century, by which time the excavated churches seem to have gone out of use.

Umm er-Rasas remained so authentically preserved because the historical substance was hardly overbuilt over the centuries. Even though some stone houses were built in the Ottoman period and Bedouins lived temporarely in ruins until the 20th century, no new settlement arose on the archaeologically relevant site.

Rediscovery, excavations
In 1807 Ulrich Seetzen, the German explorer, re-discovered the site.
In 1986 excavations started on the north edge of the outer quarter of the ruins, carried out by the Studium Biblicum Franciscanum. In 1987 the area of the tower was excavated. In 1988 the Swiss Max Van Berchem Foundation started the research inside the walled fort. Further excavations have been carried out yearly since those years especially in the area outside the Kastrum.

© Compiled by Universes in Universe

© Texts and photos are protected by copyright.
© All the photos by Universes in Universe

The texts in this presentation of Umm er-Rasas are mainly based on information in: Nomination of the old city of Um er-Rasas (Kastrum Mefa’a) for the World Heritage List, by the Department of Antiquities of Jordan, February 2002.
Also, the seminal book by Michele Piccirillo The Mosaics of Jordan is an important source from which some paragraphs are quoted.