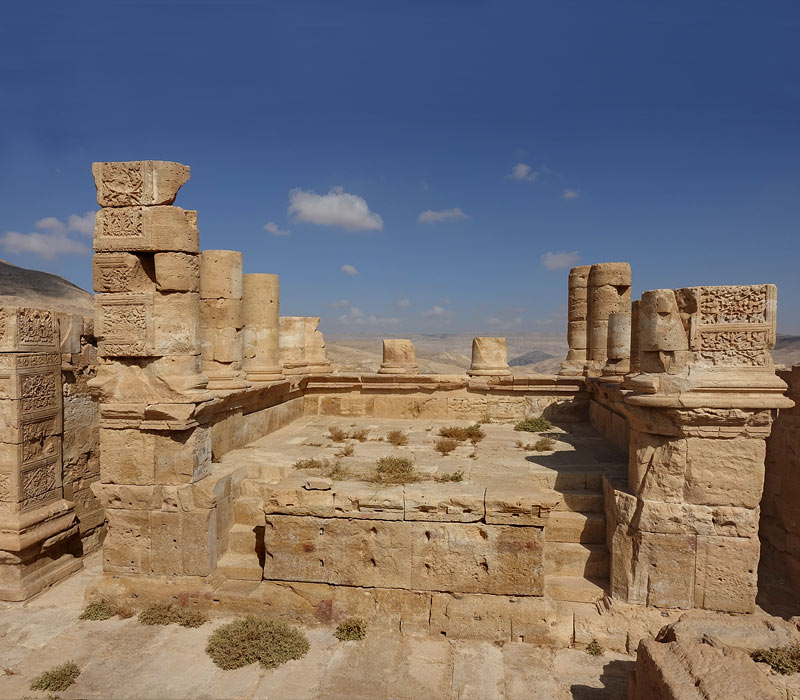 The temple of Khirbet edh-Dharih is the site of origin of the elaborately carved façade that is the main attraction in the Jordan Museum's Nabataean hall.

Once an important sanctuary and village on a hill over Wadi al-La‘ban on the main caravan road from Petra, it is very easy to reach for today's visitors driving along the King’s Highway.

Dharih's Nabataean settlement can be roughly dated to around 100 AD. It flourished during a period of prosperity in times of the Roman annexation of the Nabataean Kingdom. Ayn al-La‘ban and two other springs guaranteed water supply all year round. After the strong earthquake of the 360s AD, a small village was built during the Byzantine era, inhabited until early Islamic times.

The temple (22 m x 16 m) consists of an unroofed vestibule to the south which opens to an almost square complex to the north, with a cultic platform in its center. This columned podium (7 x 7 m, height 1.40 m) is accessed through two narrow stairways in the front. In the central slab of its pavement is a rectangular hole flanked by two small circular ones. Beneath the slab, a stone basin was found. The excavators interpret this as a system for sticking a betyl, and collecting the offering liquid after the ritual libations. It is not clear if this would have been wine, oil, or even blood. In a later phase, further two betyl holes were added in diagonal, which indicates a cult of a triad of gods.

A narrow U-shaped corridor surrounds the podium on three sides to circumambulate it in ritual processions. The hallway also gives access to two crypts situated under the platform and to the corner rooms. The northeast one encloses a staircase that used to lead to a terraced roof, and the two on the northwest side have large wall cupboards.

The famous façade facing south was 15 meters high. It had two protruding pedestals that used to host statues on each side of the entrance door, and two large windows above them. The architrave was decorated with carved vines and animals, and had Medusa heads at the corners. The frieze above displayed figures of the Zodiac alternating with winged Victories, and the triangular pediment, sea centaurs crowned by flying Victories. Standing eagles guarded the central figures. While several of the mentioned figures can be seen at the Jordan Museum, the central couple of gods, Dushara and al-'Uzza, can only be guessed from fragments.

It is assumed that the craftsmen of the Dharih temple were the same who decorated the temple on the peak of Jabal et-Tannur.

© Texts: Compiled and edited by Universes in Universe, based mainly on information in: Zeidoun Al-Muheisen and Frangois Villeneuve: Archaeological Research At Khirbat Adh-Dharih, Annual of the Department of Archaeology, 2005.

Photo tour through the Temple 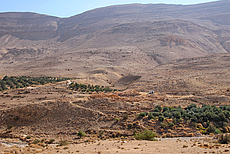 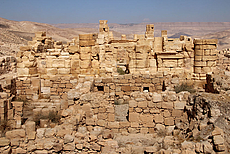 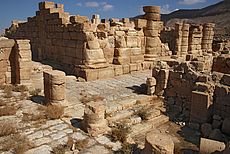 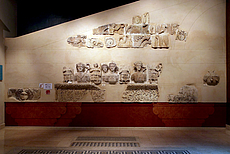 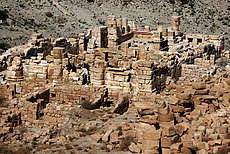 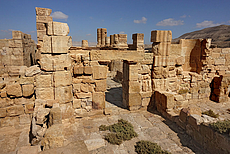 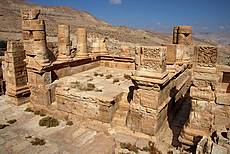 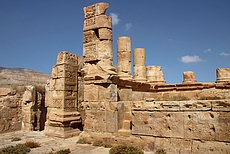 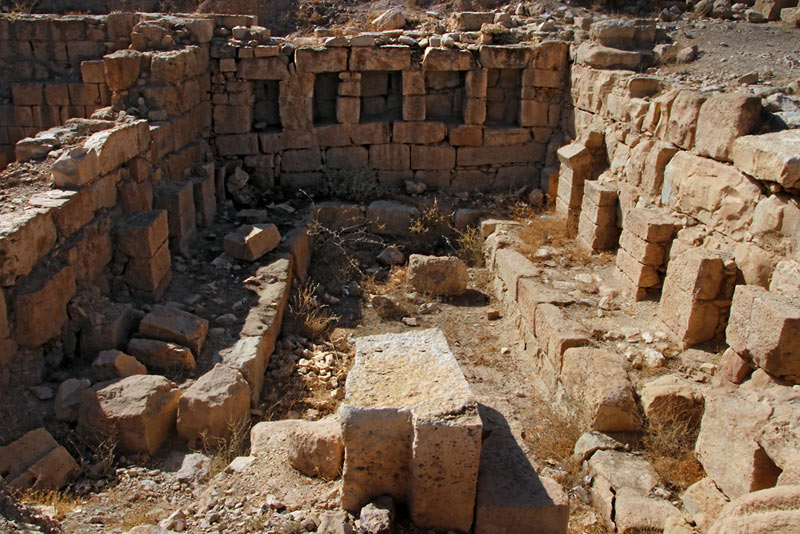 Khirbet edh-Dharih
About 170 km from the center of Amman
On the King's Highway, between Kerak (50 km) and Tafila (20 km)
About 100 km north of Petra 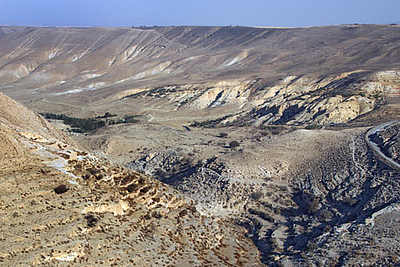