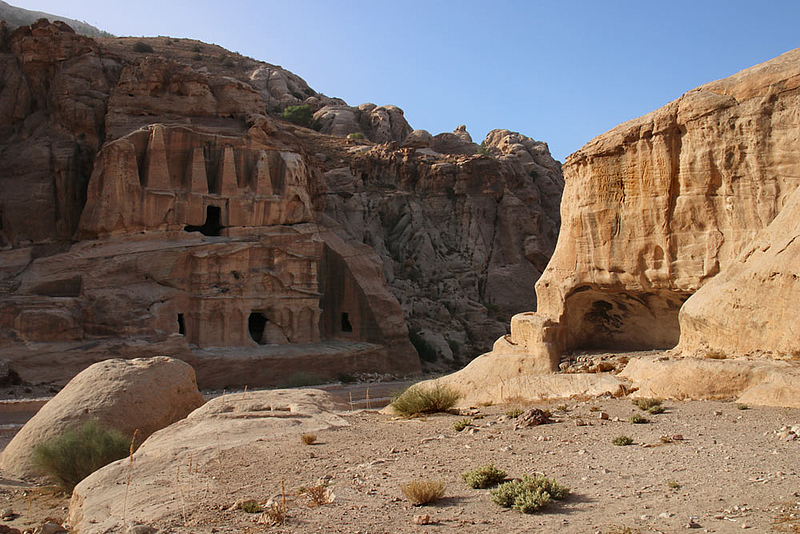 An inscription to the right of the pathway, prominently placed like a billboard, refers to the Obelisk Tomb and Bab as-Siq Triclinium on the opposite slope of Wadi Musa (information and photos on this unique burial complex on the following pages).

The bilingual inscription was carved during the lifetime of the tomb's owner. In the Nabataean text, which is obviously more important for him, this man Abdmanku (or Abdomankō) mentions his paternal lineage over three generations. In the Greek abridged version his name and that of his father are Hellenized:

[Nabataean]
ʿAbdmanku son of Akayus son of Shullay son of ʿUtayhu….built this burial-monument (for himself) and his descendants and their descendants for ever and ever (in the year…) of Maliku, during his lifetime.

[Greek]
Abdomanchos son of (Ach)aios made this (funeral) monument for (himself) and for his (chi)ldren.

Since the funerary complex does not fit into a chronologically classifiable scheme and the number behind the mentioned Maliku is not legible, long doubts arose as to which of the two Nabataean kings could be meant by the name Malichos. Finally it was proven that it was Malichos II, ruling from 40 - 70 AD, the grave and the inscription were therefore made during his reign or at least started in this period.