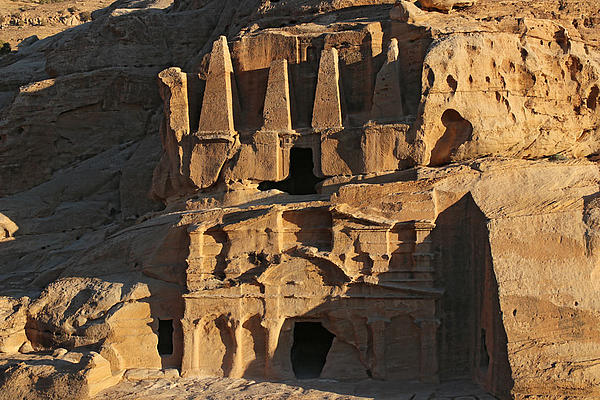 A triclinium is a dining room widely used in Antiquity with three benches (or sofas) on which the guests reclined while feasting. In Petra, more than a hundred such triclinia of various sizes have been found, about a quarter of them in connection with tombs for ritual banquets in honour of the deceased.

Although the Bab as-Siq Triclinium (BD 34) is designed quite differently from the Obelisk Tomb (BD 35), it was created at the same time and in exact coordination with it, which is proven by photogrammetric surveys (40 - 70 A.D. - see Obelisk Tomb).

The strongly weathered façade, about 15.5 m wide and 11 m high, is classified as a complex classical type in Nabataean rock architecture. The lower level is divided by four engaged columns and a pilaster with quarter columns at both corners, all crowned by Nabataean capitals. The upper part is adorned by several broken (open) pediments: a flat one above the architrave, framing the high arched pediment above the entrance; the largest one in the middle; and probably also on the outer sides above, of which only the left part of the pediment remains.

The central interior with the triclinium is approx. 6.4 m wide, 7.4 m long and 4.3 m high. The three stone benches on the walls, 2 m deep and approx. 90 cm high, were to be climbed over two steps at the corners. In the back wall there are two square loculi (compartments to house the body) with graves.

Grave chambers were carved out of the rock on both sides of the triclinium. In the left one four graves are embedded in the ground. The right chamber consists of two rooms. In the first one a nefesh can be seen engraved into the left wall. In the corner is the access to the rear room with four floor graves, which are rounded at the ends. 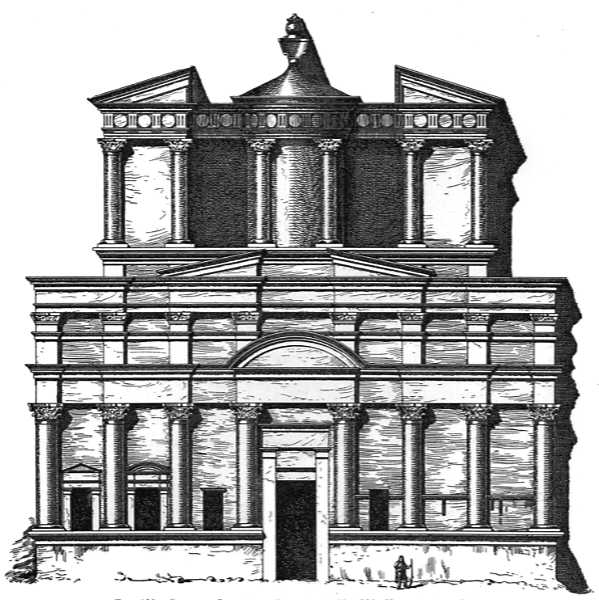 The basic structure and the variety of architectural and decorative elements are inspired by Hellenistic architecture. The most famous example is Al-Khazneh (Treasury), probably built in the second half of the reign of King Aretas IV. (reigned 9 B.C. - 40 A.D.), where clear references to the Ptolemaic palace architecture of Alexandria can be seen. It served as a model for some other facades of the complex-classical type, of which there are 35 in Petra, such as the Corinthian Tomb and Ad Deir (Monastery).