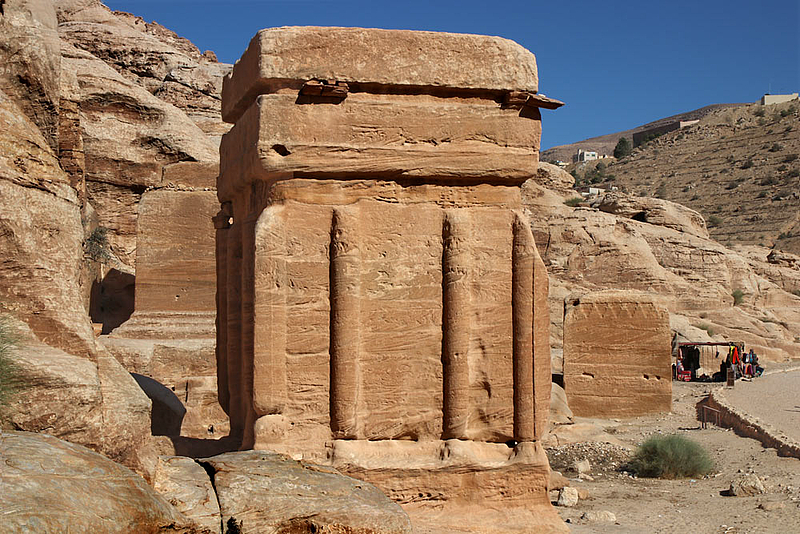 This block tomb differs greatly from the others, which can be traced back to a later transformation. It stands on a stepped, strongly eroded pedestal, is approx. 8 m high and has a side length of 5.8 m each. On all four sides and at the corners it is decorated with pilasters, which were crowned by capitals, embedded in a wide groove.

In the upper area, two horizontal lines mark an empty band, which has the same proportions as those decorated with a frieze of crowsteps on the other monuments. Traces of chisels in this area suggest that the frieze was cut off. In a deep groove above the band there are remains of overhanging stone slabs.

On its flat top there is a large rectangular shaft about 2 m deep. The shaft could be reached by a movable bridge via a ramp hewn out of the rock behind it. As the responsible archaeologist Fawzi Zayadine reports, during excavations in the late 1970s no grave goods or bones were found in the burial pit, but instead broken pipes. It is possible that the cavity was used in Byzantine times to collect water, and that the Arabic name of the block tombs, as-Sahrij (cistern) is related to this.

During an exploratory excavation behind the block monument, Michel Mouton and Francois Renel discovered the access shaft to an underground burial pit. They also came across the narrow railing for holding the cover plates, which is common in such graves, and a channel for the drainage of rainwater.