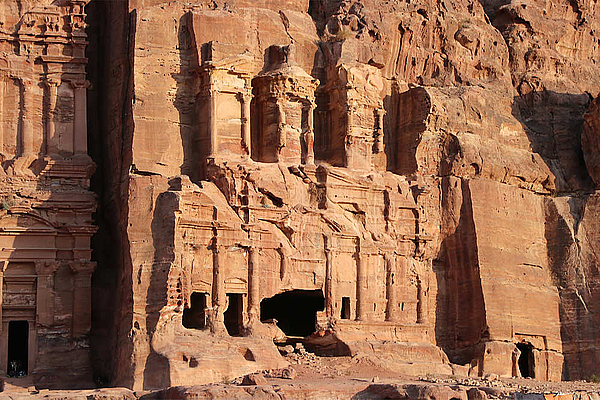 The design of this tomb (BD 776, dated 40-70 AD) is based on the structure of Al-Khazneh (Treasury). When Leon de Laborde visited Petra in 1828, he called it the Corinthian Tomb because of its capitals. This has often been dismissed as a mistake, but in fact they are a Nabataean adaptation of Corinthian capitals, in which tendrils with flowers appear in the middle field between the corner volutes instead of the spirals (helixes). At the Corinthian Tomb, however, the tendrils are much less detailed and worked out than at the lower capitals of the Al-Khazneh, where the Alexandrian model is more easily recognizable (see the detailed photos above).

The heavily weathered façade (27.55 m width x 28 m height) consists of three orders. The lowest is structured by eight half columns, whose centre pair carries a segmental (curved) weather-beaten pediment. The middle order is also very eroded especially on the left half. It has eight dwarf pilasters in alignment with the order below. The recessed and protruding spaces between the supports of the entablatures alternate in an opposite way on both orders.

The broken pediment of the middle order is joined by a cornice across the top forming the base for the large broken pediment which crowns the monument. This upper order with six front three-quarter columns strongly ressembles the Al Khazneh, including a large tholos with tent roof and capital. The urn at the apex is missing.

A surprising feature of the façade is the asymmetrical arrangement of the openings: windows of different sizes to the right, doors to the left. The far left door carries a triangular pediment, while the second one, a segmental pediment. The main doorway (largely destroyed) and the windows correspond to the largest of the four interior chambers. In this space there are three wide recesses in the back wall and four recesses of various sizes, including a loculus, in the right wall.

In front of the tomb, traces of four water basins can be seen. 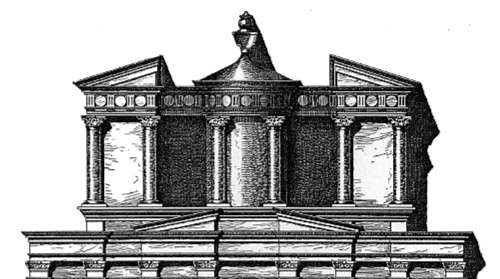 A "broken" (open) pediment has its centre cut out or offset to the rear, whereas the two lateral segments remain in place. This design structure was very popular in the Ptolemaic architecture in Alexandria and has been adopted by the Nabataeans from there. It is one of the most striking features of Al-Khazneh (Treasury), and Ad Deir (Monastery).