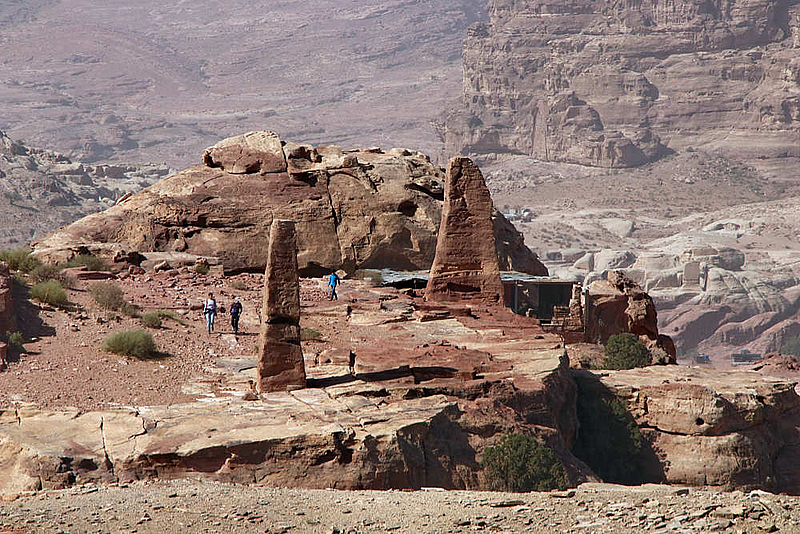 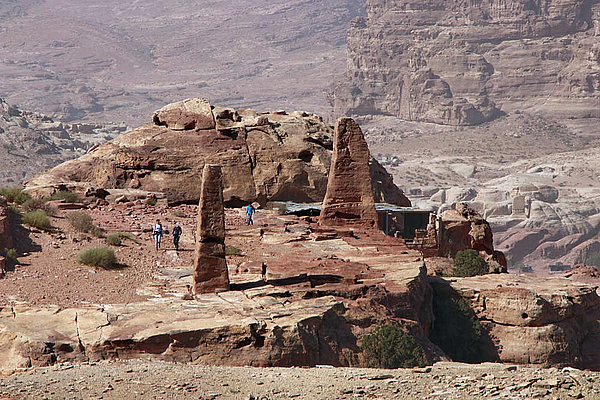 "Obelisks" on the Jabal al-Madhbah

Much has been speculated about the significance of the over 6 m high stone monuments, completely hewn out of the massive rock, called "obelisks", even though they are not. Nor are they likely to be signs of the presence of the deities Dushara and Al-Uzza, as is occasionally claimed.

The basic shape of the pointed pillars corresponds to the Nabataean nefesh. "They were deliberately left standing by the workers during quarrying and could be judged in a similar way as the carvings on the quarry walls: Respect for the deity in the rock and monumental commemoration of quarrymen who died in accidents. In this sense, the location of the two pillars so close to the High Place of Sacrifice would be a deliberately exposed position, which, unlike the 'internal' carvings, should be seen in public, and therefore a strong sign, reflecting the importance of the stonemasons in Petra". (Wenning, p. 479)

The name Zibb 'atūf' refers to the western, thicker and somewhat crooked pillar (in the photo above, the one at the back), which probably means "Penis of the Atuf". When Gustaf Dalman was in Petra in the first decade of the 20th century, nobody of the local Bedouins knew who this Atuf could have been. It was probably just a joking name for the area around the pointed pillars - more about the name of the mountain in our introduction.

One of the most beautiful tours in Petra leads to the high sanctuary on the Jabal al-Madhbah, passing the so-called obelisks, and down into Wadi Farasa East.