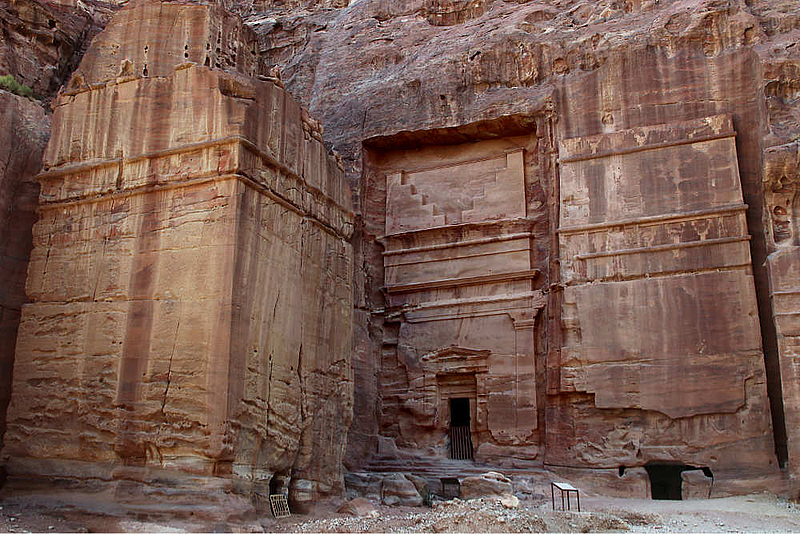 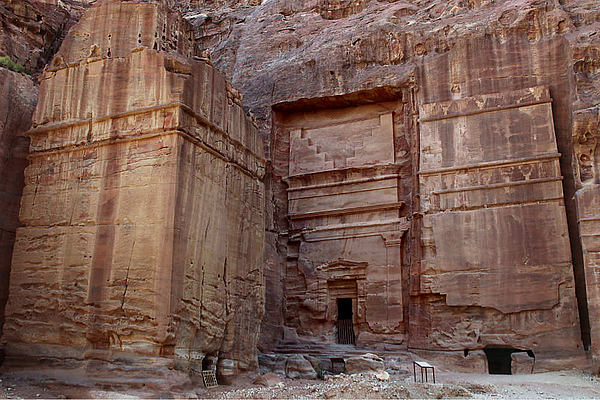 The rock-cut façade (ca. 10 m width, 19 m height), framed by the hollow areas above and along its sides, is decorated with five steps facing each other and a cavetto cornice, followed by a plain attic, and main entablature, which is supported by two pilasters. This plain attic, in addition to the mentioned elements, characterizes the tomb as Hegra type.

The right pilaster has a Nabataean capital with a short necking band. Due to the quality of the rock, the left one had to be built as inset, and did not survive. Only the negativ form where it was inserted can be seen.

The doorway's outer order consists of two narrow pilasters with Nabataean capitals supporting a triangular pediment. In this case, the right pilaster was inset and is missing. On the pediment, remains of acroterion bases can be seen at the right and on the apex.

The doorway's inner order with two pillars and entablature is recessed. On the right pillar we can see an inscribed nefesh, whose pedestal usually bears the name of the deceased. The top of the pyramidal shape is decorated with two large petals and an inverted triangle as a stylized crown.

There are also five obelisk-shaped nefesh carved on the left wall of the interior chamber. The two outer ones bear memorial inscriptions, attributing the tomb to the Nabataean family of Zayd Qawmw bin Yaqum. In addition to the fourteen graves cut into the bedrock floor, there is a round-arched recess in the back wall with three more graves. The burial chamber is an almost square 7 m wide room.

Remains of the Nabataean water supply system can bee see on the tomb's façade, which was cut at the bottom of the frieze to insert the ceramic pipe. This pipe also runs along the northern side of the Siq, and since it was built after the pavement of the Siq in the last decades of the 1st century BC (more about, see the Siq), the tomb was most probably built before this date.

There are still traces indicating that the entire facade was plastered and then most probably painted.

Tomb 825 was restored by the German Technical Cooperation Agency (GTZ/GIZ) and the Department of Antiquities.