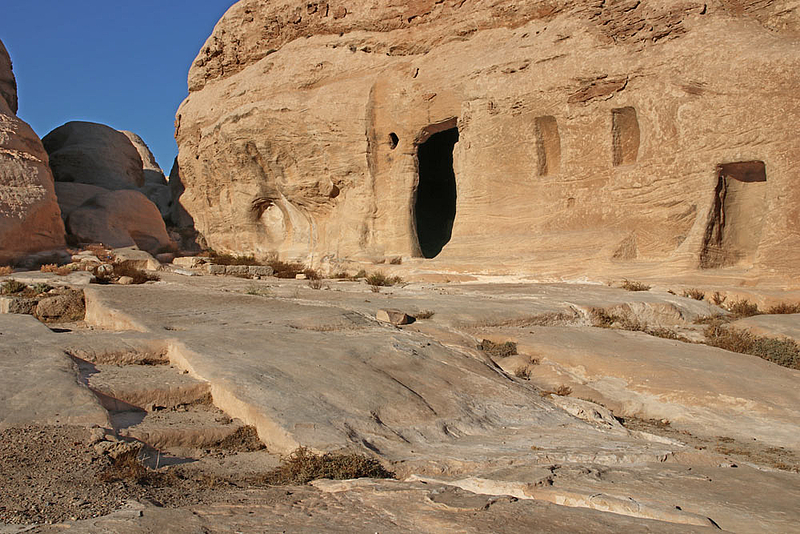 The tomb BD 24 with the northern terrace in front does not belong to the Aslah Triclinium, but was built almost one hundred years later. The archaeologists were able to determine that it was used from the end of the 1st century BC to the early 2nd century AD. Like comparable installations in Petra, the Aslah Triclinium complex was probably abandoned after the annexation of the Nabataean Empire by the Romans in 106 AD and its transformation into the Provincia Arabia.

Three niches were carved into each of the three walls of the 40 m2 chamber of the tomb BD 24. Inside, the deceased were buried in deep pits covered with heavy slabs. The main tomb is embedded in the floor of a high arch niche at the rear wall parallel to the room. Directly in front of it another grave was added later, which obviously did not belong to the original planning. The other eight graves in the 1.70 m high shafts are at right angles to the room.

Excavations carried out as part of the International Aslah Project (2010 - 2012) on the northern terrace revealed evidence of a larger brick building directly in front of the tomb, which was built around the turn of the century. There are remains of walls, recesses for foundations in the stone floor of the plateau and elements carved into the rock wall for connections with the building in front of it. These include the large notches, which were not votive niches but supports for roof arches.

A project study by Prof. Dr. Robert Wenning (Münster University) and Laurent Gorgerat (Antikenmuseum Basel und Sammlung Ludwig) in collaboration with the Association for the Understanding of Ancient Cultures (AUAC) and the Department of Antiquities of Jordan (DoA).
Website

The International Aslah Project, Petra: new research and new questions
R. Wenning in cooperation with L. Gorgerat
In: Supplement to Proceedings of the Seminar for Arabian Studies 42 (2012), pp. 127-145