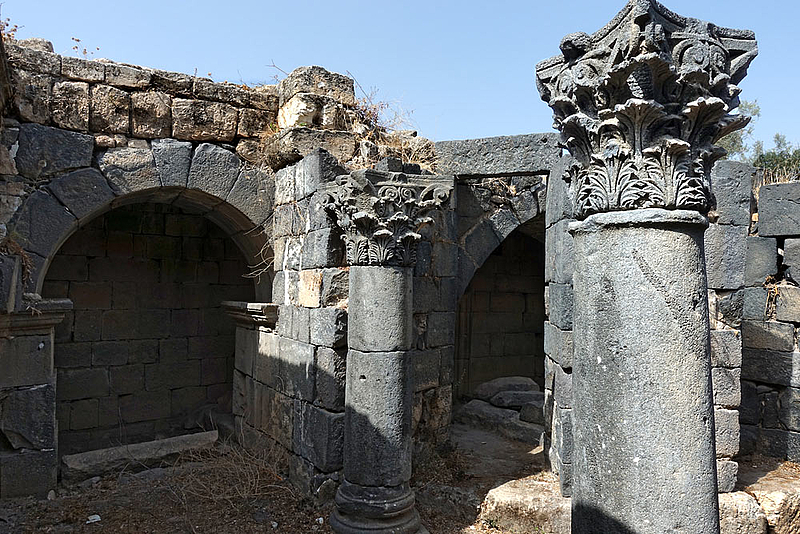 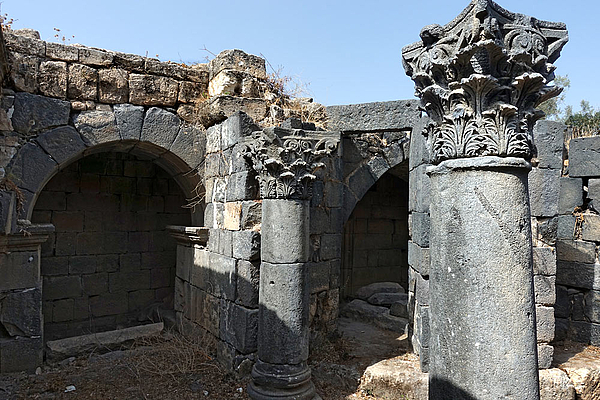 The floor of the crypt is about 4.40 m below the top step of the access staircase. For the construction, work pieces from older buildings, mainly of basalt, were used and adapted, e.g. the columns with Corinthian capitals. In the retaining wall there are blocks of the round towers of the Tiberias gate.

In the semicircular apse, covered with mosaics, there are three wide openings as accesses to the holy tomb in the centre. The architectural structure and the numerous clay lamps found there prove that it was a place of pilgrimage until the late Middle Ages.

Members of the Christian urban elite buried their deceased in this prominent site from the 4th to about the mid-5th century. In 1987/88, an excavation team led by Thomas M. Weber found eleven intact graves, besides of three looted ones, all in rectangular shafts in the ground closed with stone slabs. Michele Piccirillo uncovered and restored an inscription mosaic with the names of the deceased on grave 6, which is now in the museum of Gadara. There you can also see the stone entrance door of the hypogeum, which imitates wooden doors. (Photos of the door and the mosaic in the photo series above)

The hypogeum from the early Roman Empire (1st or 2nd century AD) is accessible from the crypt through a portal with a richly profiled door frame (now closed by a grille). Behind an anteroom is the domed burial hall, almost square (3.68 x 3.80 m without loculi) with a height of more than 6 m. In the west, north and south, six burial niches (loculi) distributed over two rows are recessed into the wall.

Outside the hall there is a barrel vaulted corridor on three sides, accessible through a small hatch on the right of the façade. It was obviously used to deposit bones from older burials, because when the hypogeum was opened it was filled to the base of the vault with parts of skeletons.