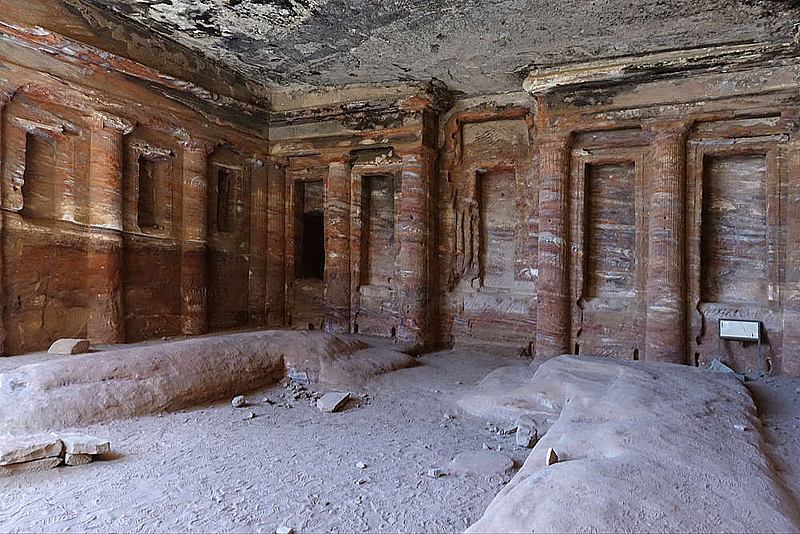 The large Triclinium of the Soldier Tomb complex has particularly bright red rock walls, interspersed with white stripes. But the walls were originally covered with light-coloured, painted stucco. Numerous traces of this have been preserved, especially on the architrave and the smoothed ceiling.

In the approx. 11 x 11 m large hall, the roughly 1 m high benches (klinai) with ledges in front of them are also hewn out of the rock. Between the walls and the benches there is a passage which is higher than the central floor. The stone bench in front of the back wall is interrupted and stepped in the middle.

No other triclinium in Petra has such a magnificent interior as this one. The three walls are divided into five sections by half and quarter columns. The lower third of the columns is smooth, the upper two thirds are decorated with cabled fluting. The entablature above the pseudo-Ionic capitals consists of the architrave and a cornice of staggered ornamental mouldings, discontinued between the two central columns of the rear wall.

Unusual for a triclinium are also the five niches on each wall, in which there may have been reliefs. This could have looked like the niches on the facade of the Soldier's Tomb, whose profile frames resemble those in the large triclinium. Above each frame, a ledge of different stone was inserted into a groove, which is still clearly visible on the left wall.

The niches in the 5.3 m high rear wall are higher (2.4 m) than those on the two side walls (1.3 m) and under each of them there is a step which is interpreted as a podium. Coarse grooves at the edges of the niche in the somewhat deeper field in the middle indicate that a more complex frame was inserted there. The rectangular recess at the very top certainly contained a panel. The round deep hole in the left niche of the back wall, possibly a tomb, probably dates from the post-Nabataean period.

There were also niches on the inside of the front wall, but only the one left of the center door is preserved (see the photo above).