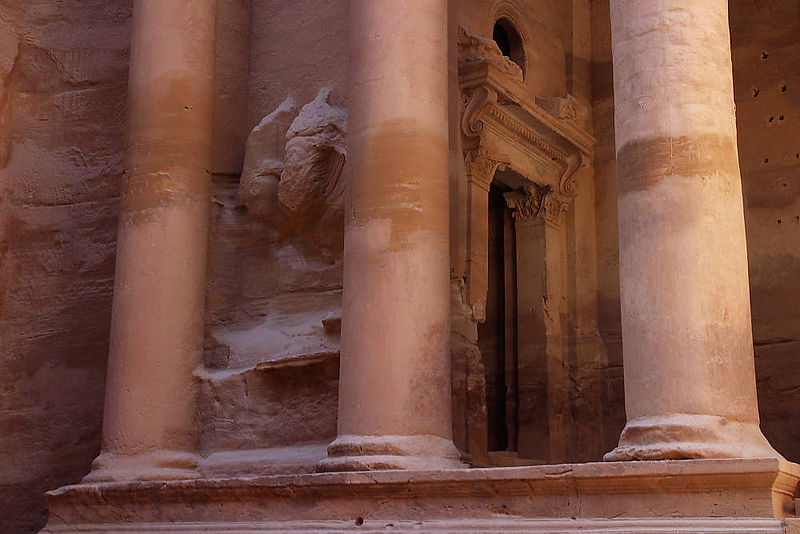 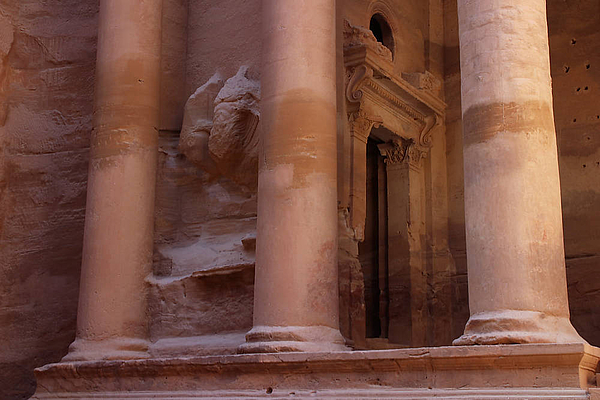 In the middle of the outer pair of columns on both sides of the lower level, 5 m high reliefs of a man next to a horse on a high double pedestal appear. They depict the Dioscuri, the half-brothers (also called twins) Castor and Polydeuces (or Pollux) from the Greek myth, adopted from Alexandria into the iconographic program of the Khazneh.

"The mythographic transmission of the Dioscuri is complex and contradictory. It contains various aspects that can be used to explain why the Dioscuri were included in the iconographic programme of the tomb facade. As twins, they were basically more effective than was expected from a single protective deity. As companions of the Spartan kings, they were regarded as knightly war helpers, then in general as protective powers, especially also of sailors. According to one version [of the myth] Castor was the mortal son of Tyndareos and Leda, Polydeuces/Pollux the immortal son of Zeus and Leda. During the kidnapping of the daughters of Leukippos Castor was killed. Polydeuces, admitted to the Olympus, asked Zeus for the mercy to be allowed to be with his mortal brother. Therefore the Dioscuri spent alternately one day on the Olympus and one day in the underworld. In this sense, they were considered a symbol of hope, redemption and immortality." (Robert Wenning, p. 154-155)

Since the Dioscuri are not depicted as warrior horsemen, but walking on the side of their horses, Wenning sees them in the context of the Khazneh's iconographic program as psychopompoi, companions of the souls of the deceased into the afterlife.

The portals to the two lateral chambers are richly decorated. The pilasters end in floral capitals on a broad rim. With the large volutes, the tendrils in between, the outwardly drawn, bevelled corners of the abacus and the bosses in the middle of the inwardly curved long sides (here, too, probably a pine cone in a jagged leaf), they correspond to the capitals of the upper order of the Khazneh.

Large volutes carry a wide cornice. On the acroteria at both corners are high reliefs of winged creatures whose bodies rise from acanthus leaves and from which grow tendrils with flowers. Unfortunately they are no longer visible in our photo of the left portal (see the detail).