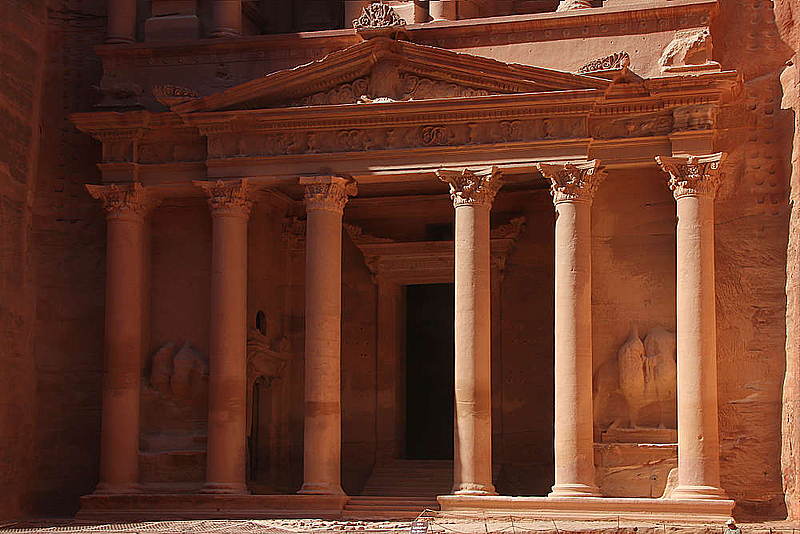 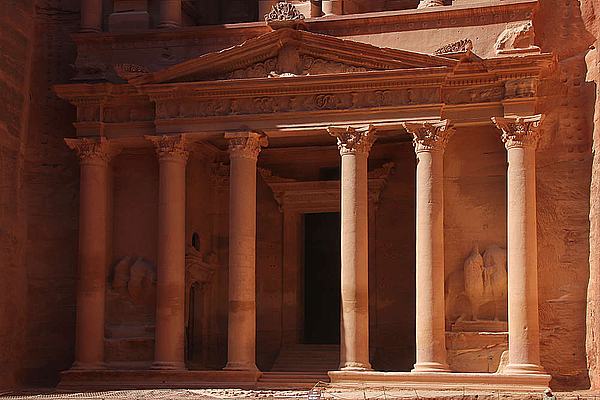 Of the six columns of the 25 m wide facade, only the middle two are free-standing (lower diameter 1.45 m). The other four remain connected to the background, the two outer ones as three-quarter columns and the second and fifth by a narrow vertical band.

The third column from the left had collapsed a long time ago and was reconstructed in 1961/62 using the original capital and some preserved segments of the shaft. It had already been a constructed one in antiquity, but the others were hewn out of the rock. The lower parts of all the columns, which stand on podiums with Attic bases, suffered greatly from repeated flash floods, which is why they had to be restored. This is particularly evident in the two on the right.

The colossal man and horse reliefs between the outer pair of columns on either side of the facade's lower order represent the Dioscuri, the half/twin brothers Castor and Polydeuces (or Pollux). More information and details on the next page.

Four steps lead up to the 14 m wide and 6 m deep vestibule, which, like the interior, is not accessible to visitors. There are another seven steps to the elevated entrance of the main portal. In the threshold there is a circular cavity (diameter 33 cm) for libations or the blood of sacrificial animals. A small hole went off from it, through which the liquid flowed via a channel into a small basin (0.57 x 0.45 m) in the floor of the vestibule to the right of the uppermost step.

Also clearly visible from the forecourt is the cornice of the portal with several ornamental mouldings, large volutes on both outer sides as well as curved acroteria that end in tendrils with flowers.

The almost square main chamber measures 12 x 12.5 m and is 12.9 m high. In the middle of the back wall three steps lead to a small chamber (approx. 3.4 x 3.3 m). From the right and the left side wall narrow shafts of approx. 4 m depth lead off. In all chambers no pit tombs nor loculi for the accommodation of the deceased have been found.

To the left and right of the vestibule there are two further chambers, both approx. 7 x 8.60 m large and 6.5 m high, which can be reached through high portals (see next page) 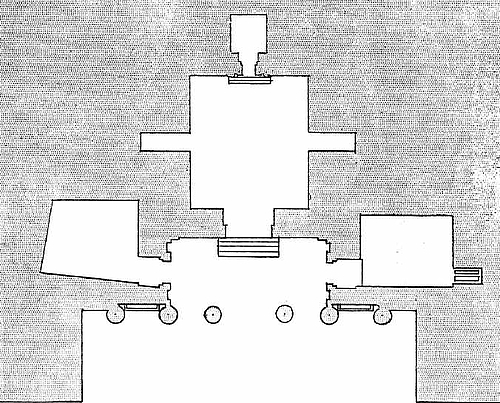 Floor plan from Brünnow & von Domaszewski, p. 223 - there adopted by Laborde.
The drawing is simplified, a floor plan based on exact measurements is published in McKenzie, Plate 81.