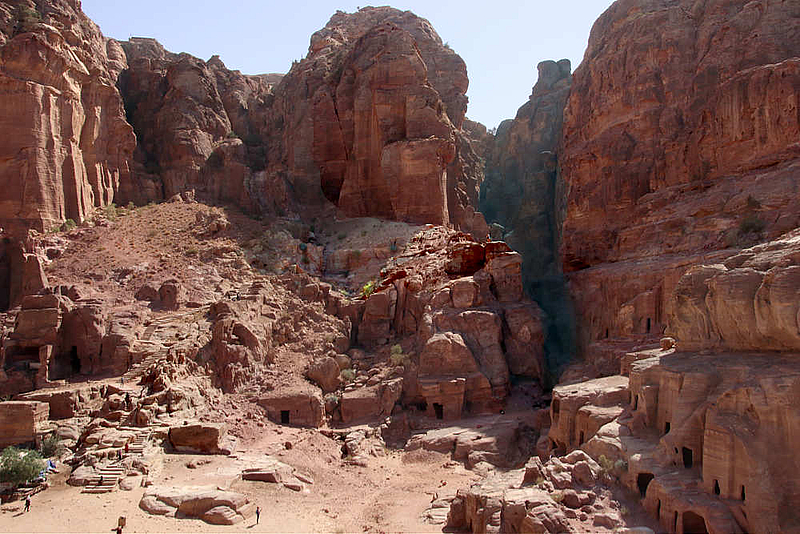 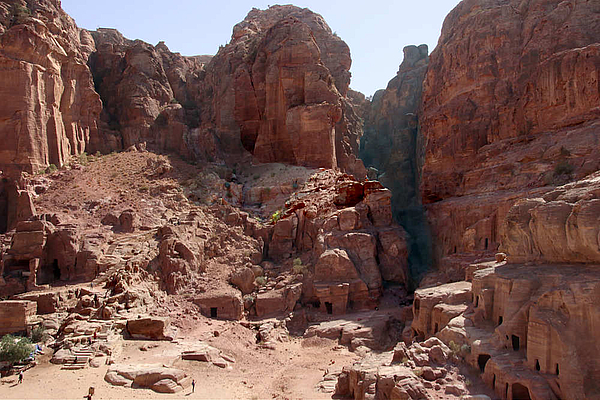 Ascent to the High Place of Sacrifice

The eastern stepped pathway up to the Jabal al-Madhbah begins between the Street of Facades and the Theatre Necropolis (right). The distnace to the High Place of Sacrifice is about 2 km, and the difference in altitude is around 150 m.

To the left of the first section of the stairs, one can see a quarry zone with a vertical rock face. It has been worked smooth from top to bottom in order to provide as few points of impact as possible for water flowing down. The quarry workers left incisions in the wall in various places that were subsequently unreachable, some of which represent a betyl and a horn altar. Robert Wenning writes that the workers thereby placed themselves under the protection of their god in their dangerous work, "the God worshipped in the rock, respectively the God to whom the mountains belonged and where his dwelling place was, the God of the Shara Mountains, namely Dūšarā." (Wenning, p. 477)

From the rock face straight on, the way turns sharply right over a short horizontal stretch and then into the narrow gorge of the Wadi al-Mahfur, through which the path winds steeply up.

One of the most beautiful tours in Petra leads to the high sanctuary on the Jabal al-Madhbah, passing the so-called obelisks, and down into Wadi Farasa East.