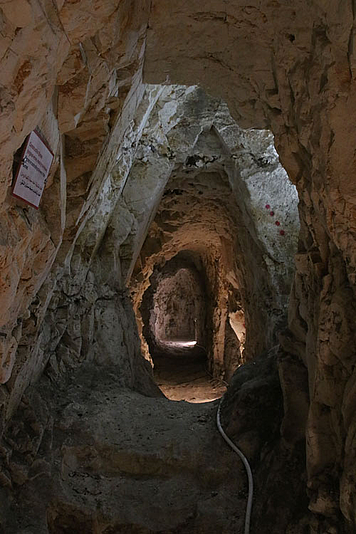 Two groups of miners worked horizontally towards each other from the bottom of the shafts (see next page). First, they chiselled pilot tunnels into the rock, which were set in the upper part of the planned tunnel cross-section. As soon as they met, the tunnels were extended to their full size and adjusted to each other. Finally, the tunnel floor was smoothed to the required angle of inclination.

On the photo you can see that a pilot tunnel was set too high, and therefore the hole had to be cut further down so that it corresponds to the general tunnel level.

The restored section under the Acropolis, which can be visited during guided tours, was part of a 170 km long water supply system with the longest tunnel of antiquity.