Probably at the same time as the Church of Saint Stephen was built (8th century), a courtyard south of the Church of Bishop Sergius (dated to 586 AD) was converted into a small church. On the west wall an apse has been added, with a raised presbyterium, originally with a chancel.

The floor was entirely covered with rectangular blue/grey stone slabs, including for presbyterium. The funerary character of the church is emphasized by multiple tombs below the slabs inside the church itself. 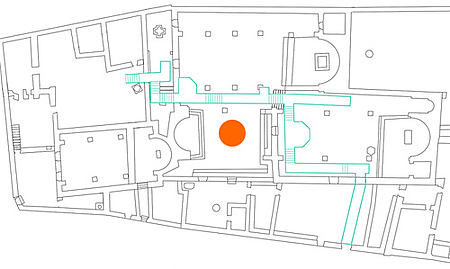 © Photo: Haupt & Binder
Groundplan: UiU, based on a drawing by the Department of Antiquities (DoA), Jordan

Informative photo tour through the Church of St. Stephen complex at Umm er-Rasas, including several churches, chapels and adjacent structures.