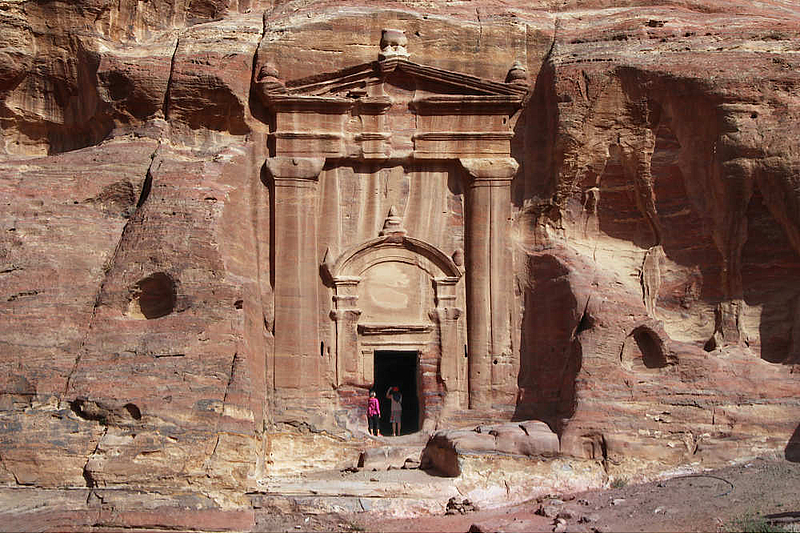 The name by which tomb BD 229 is known comes from the archivolt mouldings framing the arch above the doorway, which evoke architectural elements of the European Renaissance.

The main order of its façade of 8 m width and 13 m height consists of a triangular pediment resting on an entablature supported by two pilasters. These are lined with engaged quarters columns and topped with Nabataean capitals. The triangular pediment is decorated with three acroterion bases with lidded urns.

The second order is contained inside the main order, displaying two pilasters surmounted by the mentioned arch that characterizes the tomb. As McKenzie notes, there is no complete entablature running between both pilasters, just a section directly above each of them. This open-based segmental (curved) pediment also holds urns on the apex and ends. The door is framed by simple pilasters and entablature. There is a slit window on each side, between the principal and second supports.

The interior is a 7 x 8 m room that was excavated in 2003. It contains fourteen pit graves, at least twelve of which were used during the Nabataean period. All the graves were looted, most probably already during the Medieval period. Unusual are the tombstones with carved Nabataean inscriptions found in two of the tombs. According to the evidences obtained during these excavations, the team of archaeologists concludes that the Renaissance Tomb must have been constructed towards the third quarter of the 1st century AD. (See: C. Huguenot, MM al-Bdool, S. Schmid)

The ground in front of the façade is not finished: it shows significant differences in level between the south (right) and the north, which is half meter lower, and traces related to the extraction of the blocks are still visible. On either side of the façade, remains of a carved water basin can be seen.