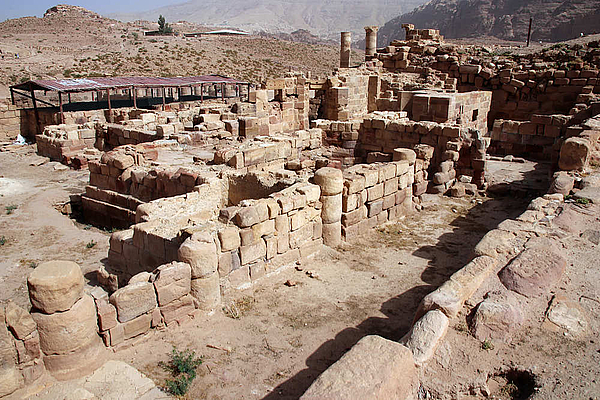 The bath complex was built shortly after the Roman annexation of the Nabataean Kingdom in 106 AD on the west side of the so-called 'Great Temple'. The approximately 42 x 31 m long complex of 22 rooms at an inner courtyard (palaestra) corresponds to the basic architectural structure of public baths, as they were built in Pompeii, among other places.

The entrance was from the west through a colonnade about 3 m wide and 15 m long (first photo above). This was followed by the apodyterium (changing room), a latrine, a well room for washing, and the usual stations of a Roman bath: frigidarium (cooling room), water basin, vestibule, tepidarium (warming room), laconicum (steam sweat bath), and other hot rooms. See the photos above.