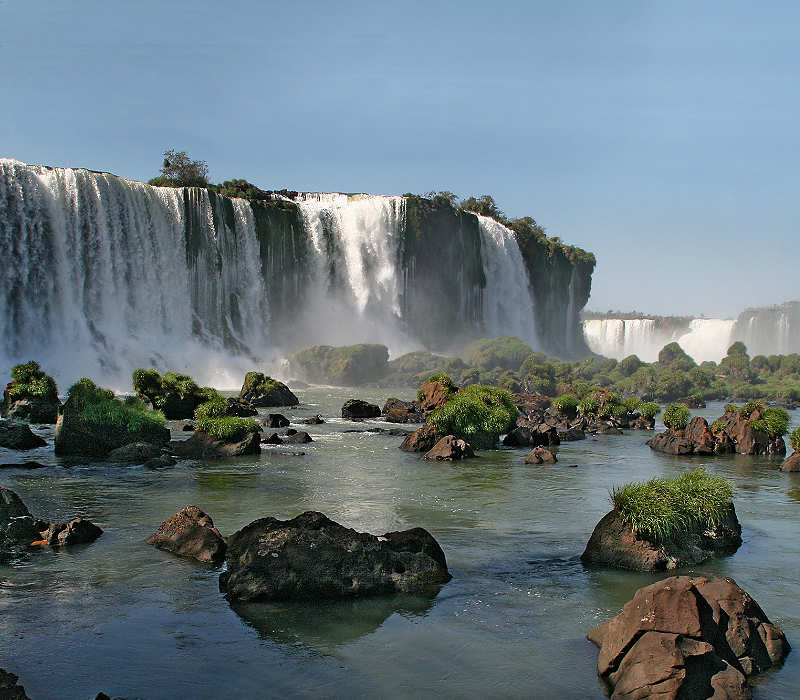 In the subtropical forest of the province Misiones, at the border between Argentina and Brazil, there is one of the world’s most spectacular natural wonders: The Iguazú Falls.

A geological fault line 200 thousand years ago, produced an altitude drop of 80 meters in the bed of the river Iguazú, right bevor flowing into the Paraná River. This formed more than 275 waterfalls across a width of almost three kilometers.

Already in 1934, with the goal of protecting the magnificent Cataratas del Iguazú, the government established the Iguazú National Park - whose name, in the language of the native guaraní, means “Grand Water”. It extends over an area of 67,620 hectares, and was declared World Heritage by UNESCO in 1984, due to its scenic beauties, and the immense biological diversity of the subtropical forest.

The circulation through the park is along modern footbridges and walkways, to be able to admire the most impressive waterfalls, such as the Garganta del diablo (Devil's Throat), a group of cataracts that fall 80 m through a narrow gorge, concentrating the highest volume of water.

The park visit is also a unique opportunity to get to know the South American subtropical forest, with its native flora of more than 2000 species, and spot animals such as carayá monkeys, cheeky coatíes (raccoons), colored birds such as toucans, parrots and magpies, and the incredible "vencejos" (Great Dusky Swifts), which nest within the rocks behind the cascading water. And, naturally, to enjoy the sight of amazingly beautiful butterflies.