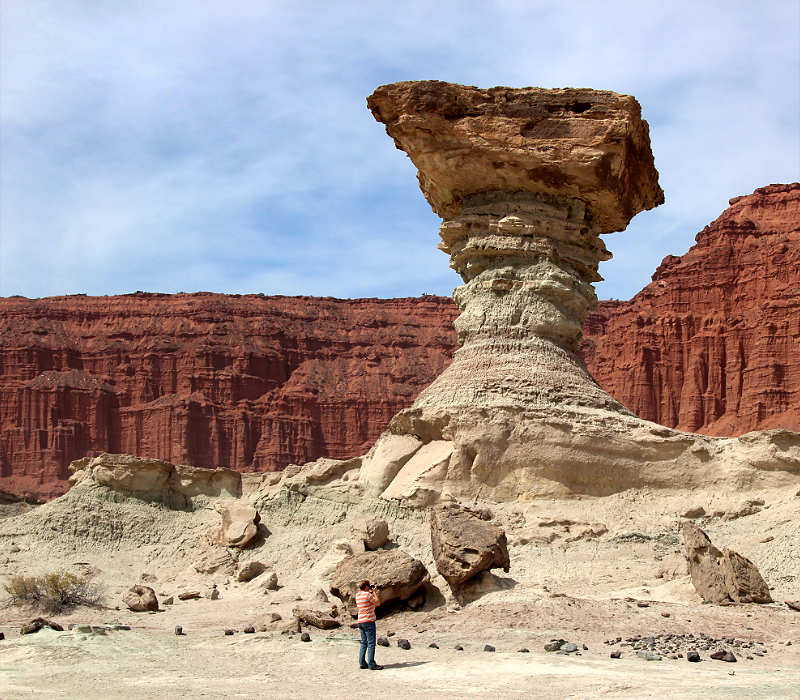 To explore the landscape of Ischigualasto or Valle de la Luna (Moon Valley), as it is also called, is getting immersed in a prehistoric environment of overwhelming beauty.

Ischigualasto in the northeast of the province of San Juan, a UNESCO World Heritage Site along with the neighboring Talampaya Park in La Rioja, is a geological basin in which continental sediments formed more than 200 million years ago accumulated. Besides captivating the visitor with its strange rock formations and sedimentary layers of different colors, it is one of the richest palaeontological deposits on the planet. It is the only place in the world that reveals the evolution of life in the Triassic Period through the fossilized remains of animals and plants that have been found and continue to be discovered. In the last 25 years paleontologists researching at Ischigualasto have discovered 5 of the 7 oldest primitive dinosaur species in the world and have been able to understand how environmental factors influenced the evolution of the Triassic fauna. View of the Valle Pintado (Painted Valley), with hills of well-defined sedimentary layers in different colors, composed mainly of clays and volcanic ashes, together with sands and other types of eroded rocks.

Ischigualasto Provincial Park has a total extension of 63,000 hectares. The traditional tourist circuit of about 40 km, can be covered with your own vehicle in about three hours, in a convoy led by a park guide.

There are five stops along the route, where visitors can appreciate strange geological formations produced by the action of the wind on rocks of varying hardness, with greater or lesser resistance to erosion. The imagination of the visitors has related some of the formations with well-known figures, giving them names such as the submarine, the mushroom, the sphinx, etc. 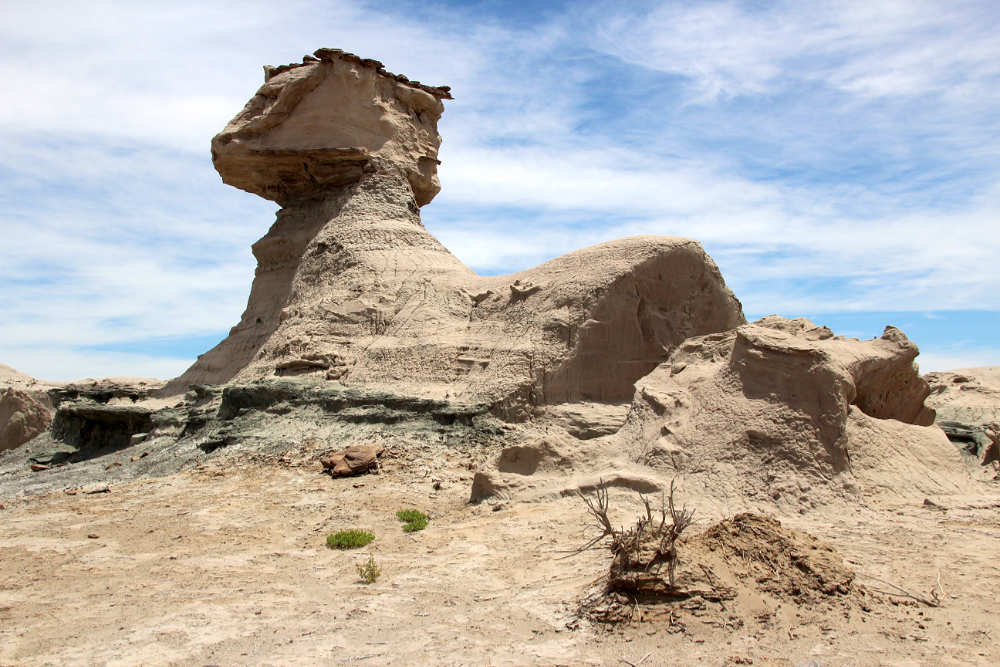 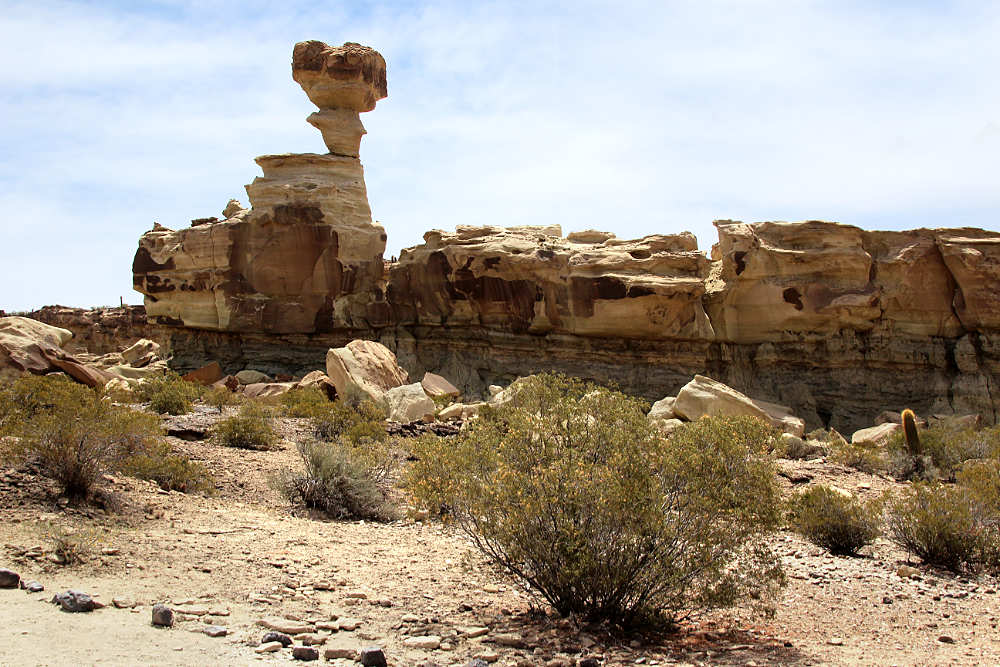 The process of wind erosion that produced this geoform continues unabated. It used to have two "periscopes" but in 2015 one of them collapsed. 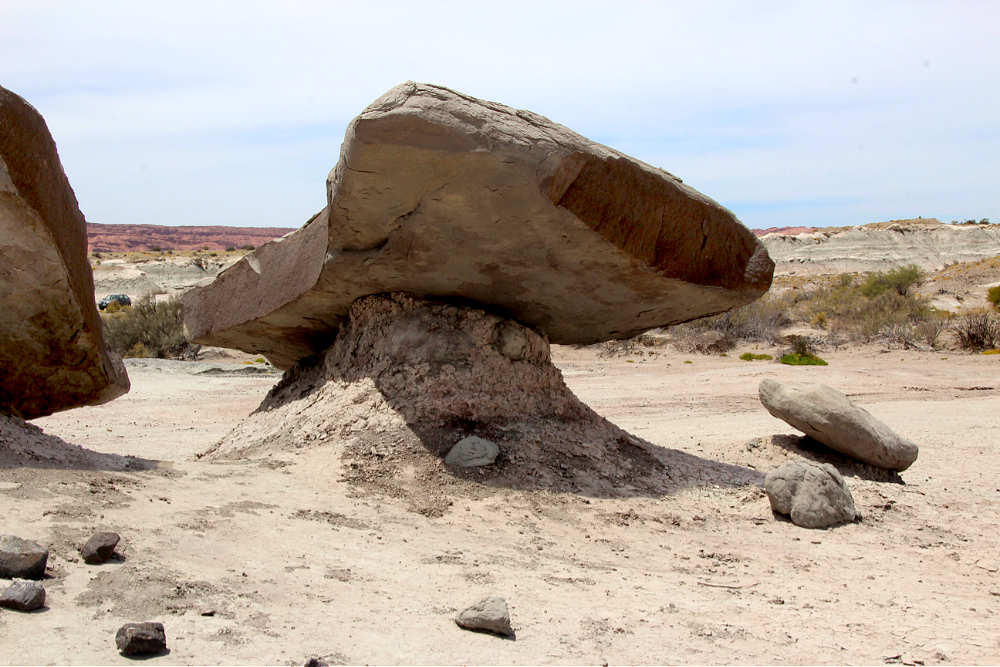 The limestone table "slab" has resisted erosion better than the clay base. 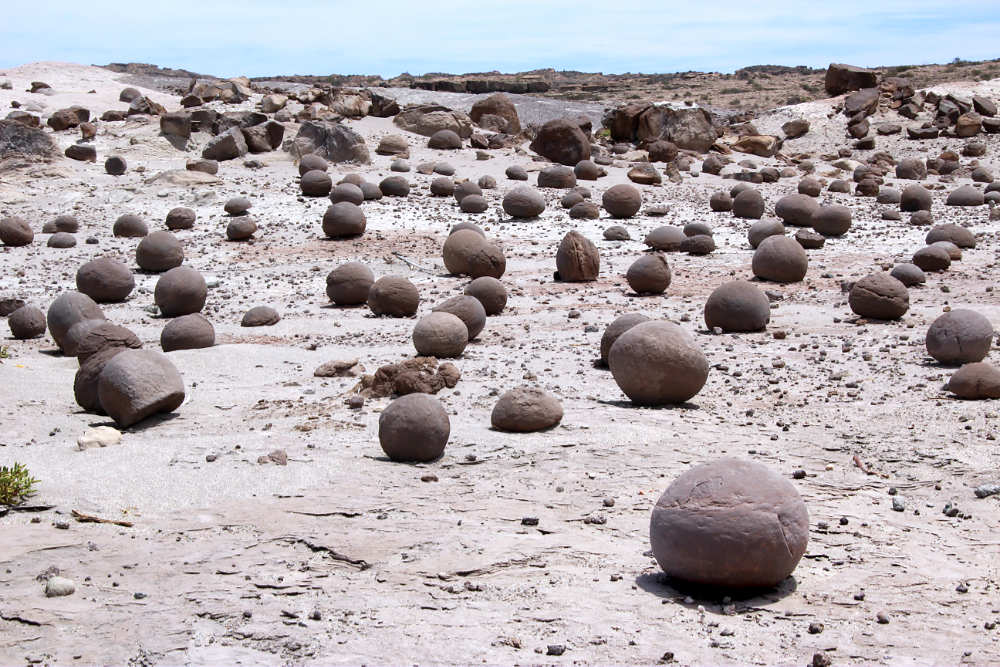 This type of round rocks are "concretions," formed from mineral precipitation (solidification of a dissolved material) around some kind of nucleus which is often organic. 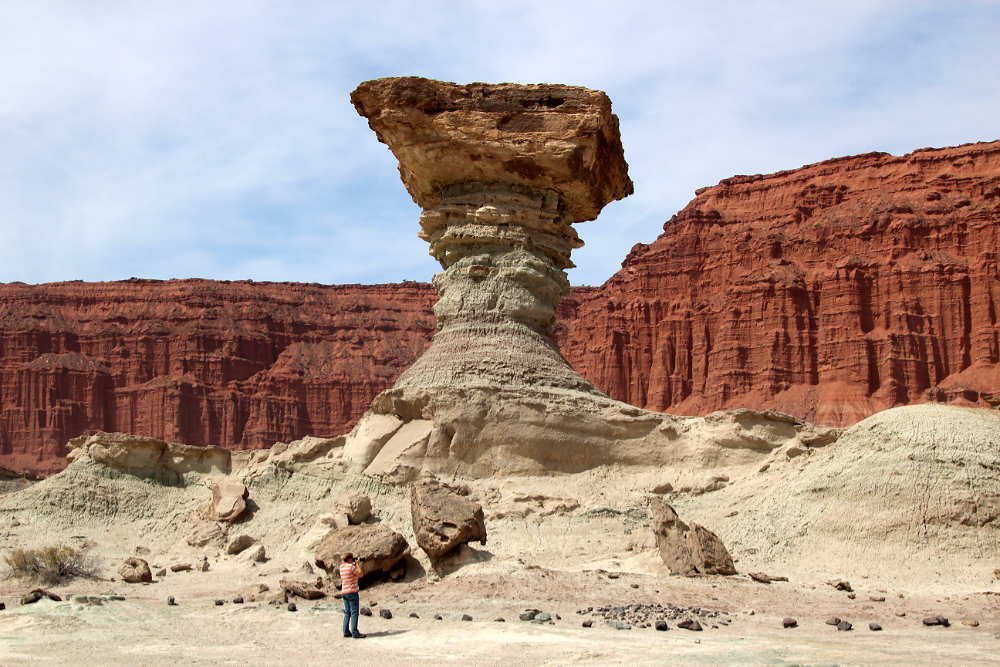 The Mushroom and the Red Cliffs

The so-called "mushroom" is another example of differential erosion: The hard sandstone rock layers have resisted better to the erosive agents than the softer clay ones.

Its shape contrasts with the imposing backdrop of the Barrancas Coloradas, which delimit the provincial park to the northwest and mark the beginning of Talampaya National Park in the neighboring province of La Rioja.

The next photo shows "mushroom" formations behind hills with sedimentary strata of different colors and the Barrancas Coloradas in the background. 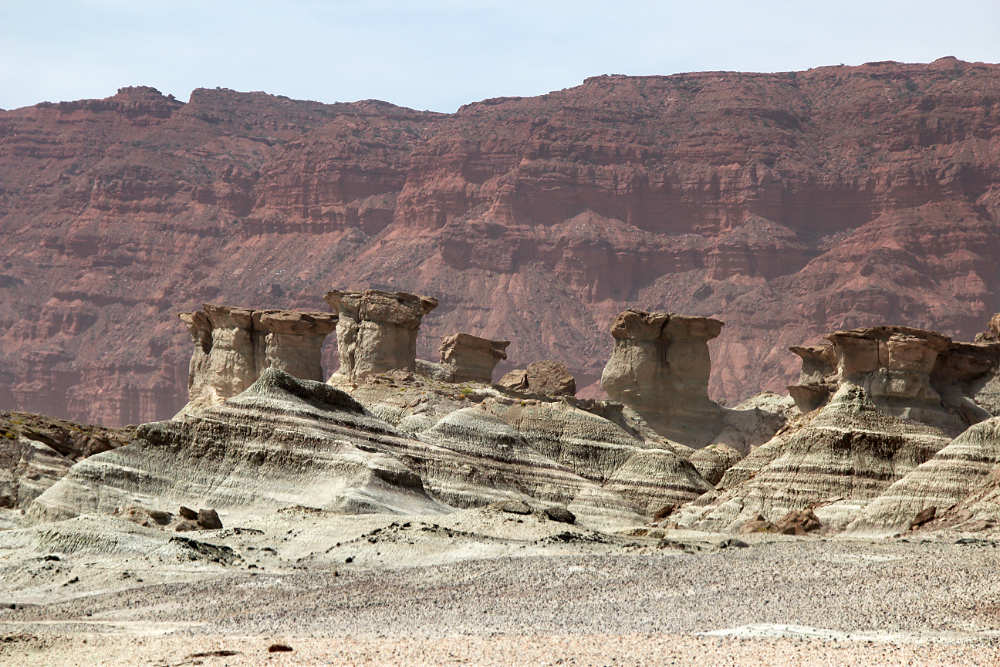 Halfway along the traditional circuit is the Site Museum Dr. William Sill, where visitors can become aware of the scientific value of Ischigualasto. They will be able to see real fossils "in situ" and observe how they are worked with. Students from the University of San Juan provide information and answer visitors' questions.

William Sill (1937 - 2008), North American paleontologist based in San Juan since 1969, was the precursor of research in Ischigualasto. Thanks to his efforts, Ischigualasto Provincial Park was inscribed as a World Heritage Site in 2000. 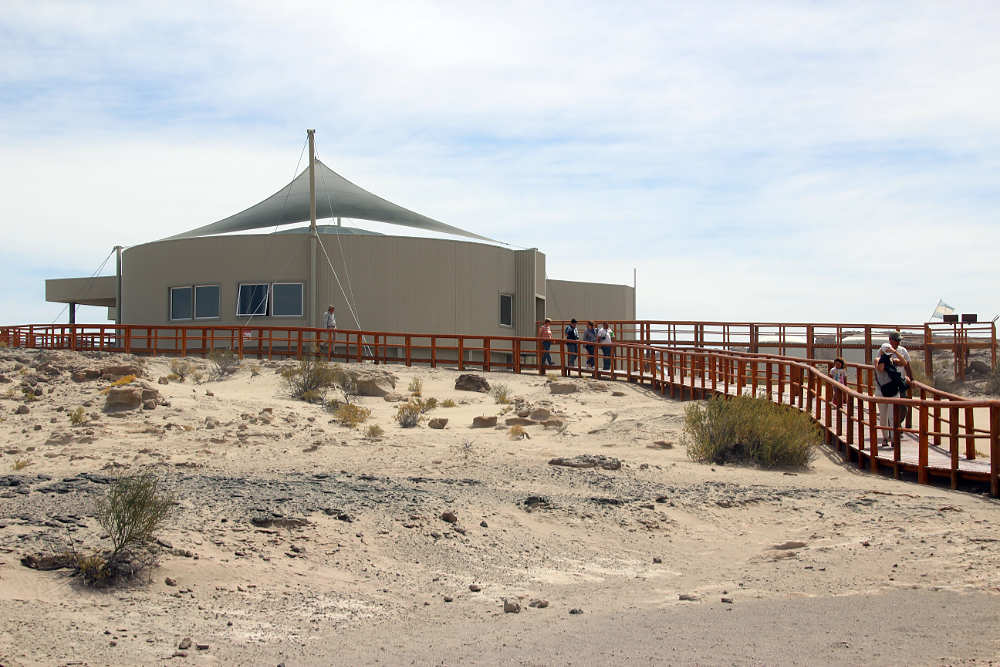 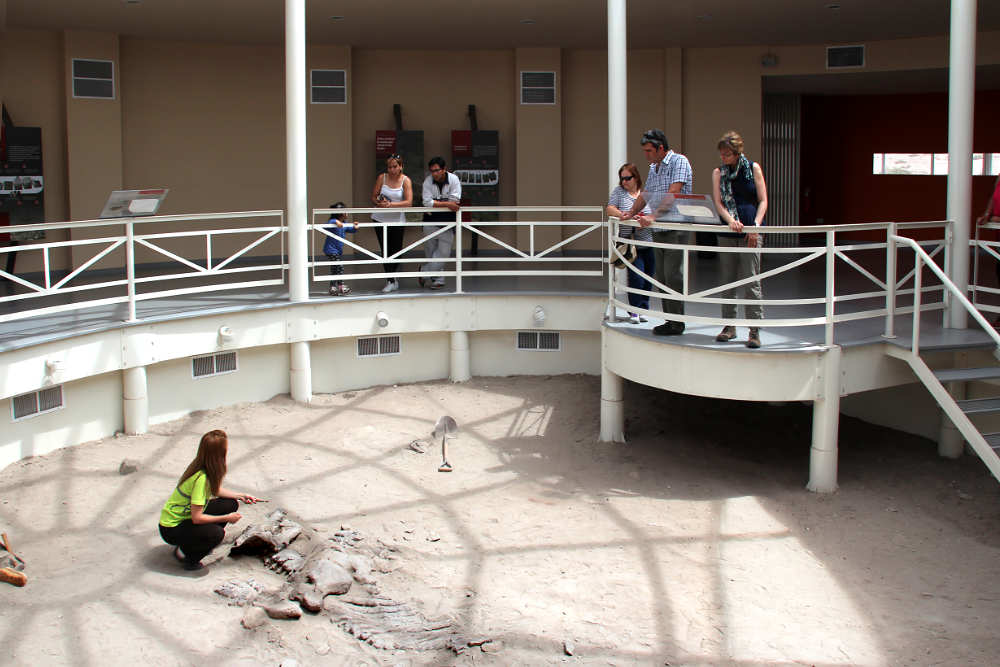 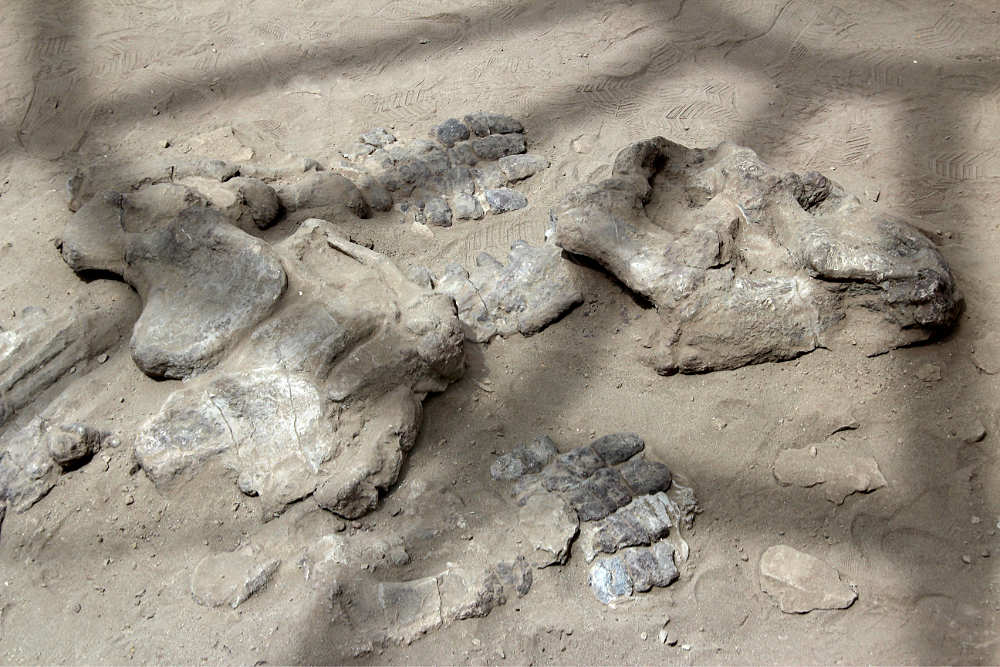 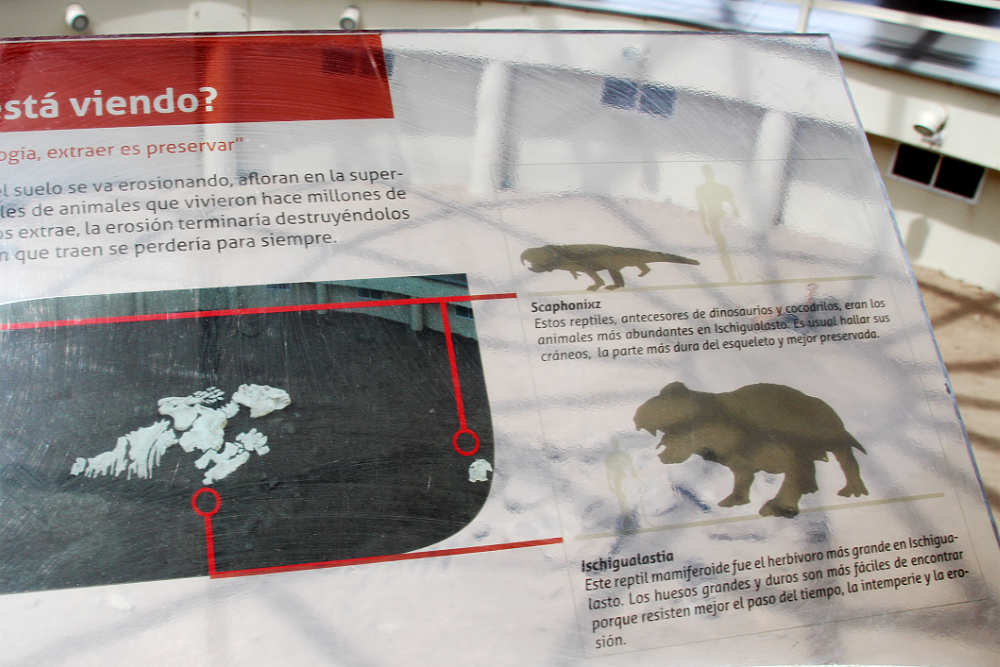 At the entrance to the Park is the Interpretation Center of the National University of San Juan. There the visitor can find information about the different periods, especially the Triassic, visualized in gigantographies, videos and dioramas, as well as fossilized bodies and skulls, including several complete assembled skeletons. It is also possible to learn about the current fauna and flora of Ischigualasto through large didactic photographs. 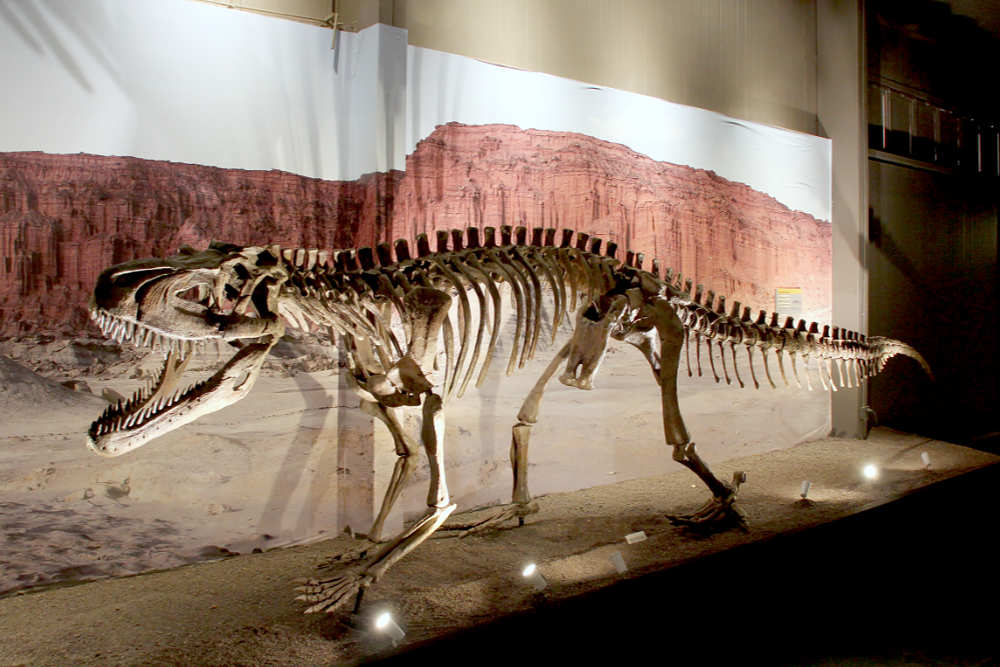 Skeleton of an archosaur that lived in Ischigualasto more than 200 million years ago. 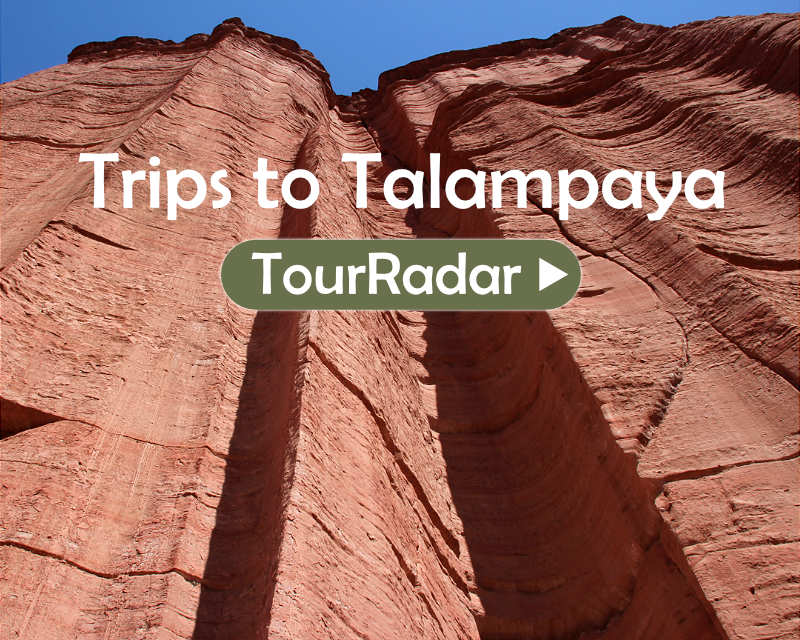 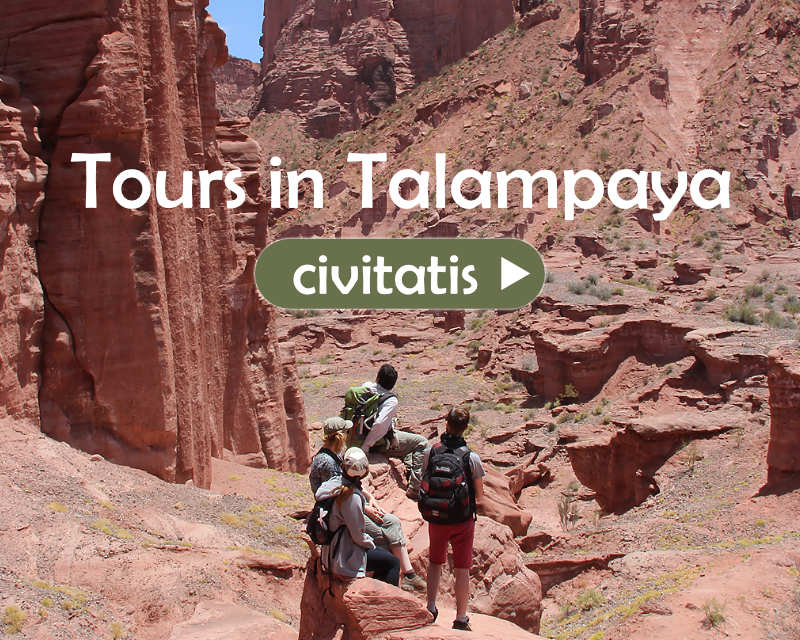 In addition to the traditional daytime circuit with your own vehicle in convoy ( in order of arrival, no prior reservation is necessary), the park offers a Full Moon Circuit every month for 4 days, as well as hiking and mountain bike tours.
Reservations and information: reservas.ischigualasto(at)gmail.com