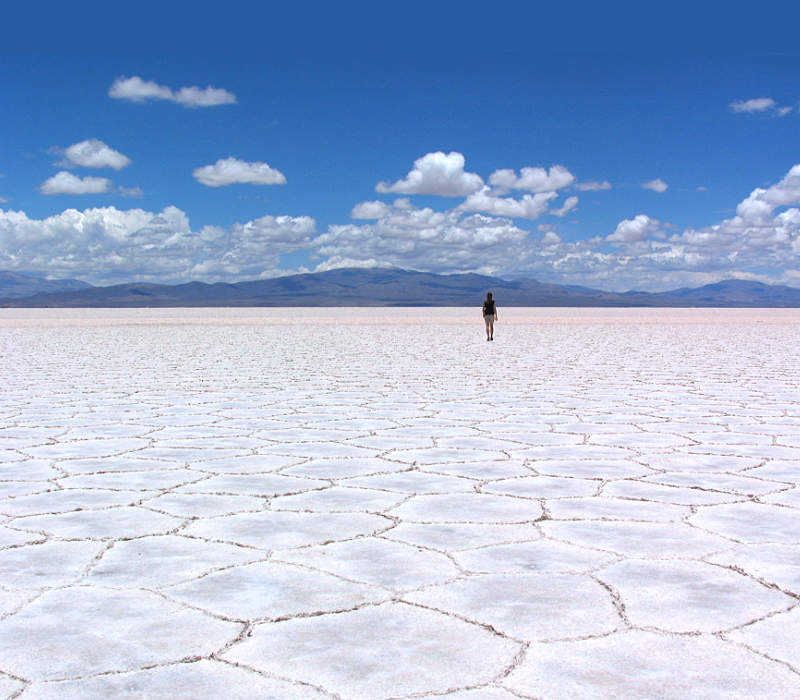 The fascination of walking on the crystallized surface of a salt flat is difficult to express in words. You venture into a white and silent immensity, a sublime desert that captivates with its strange geometric order of hexagonal patterns fading into the infinite, in contrast with the deep blue of the sky and the changing formations and shades of the clouds. It is a paradoxical landscape, on the one hand extremely inhospitable, but at the same time essential for life, configured by that indispensable element for all living organisms, as it is salt. The Salinas Grandes del Noroeste, shared by the provinces of Jujuy and Salta, are the best known salt flats in Argentina. They extend over an area of 212 km2 at an altitude of 3,450 meters above sea level. They are located just 66 km from the picturesque town of Purmamarca and can be easily reached by the RN 52 that crosses them, continuing on to Chile through the Paso de Jama. It is a fantastic tour, which can be done as excursion from Salta or from Jujuy, also in combination with other destinations. 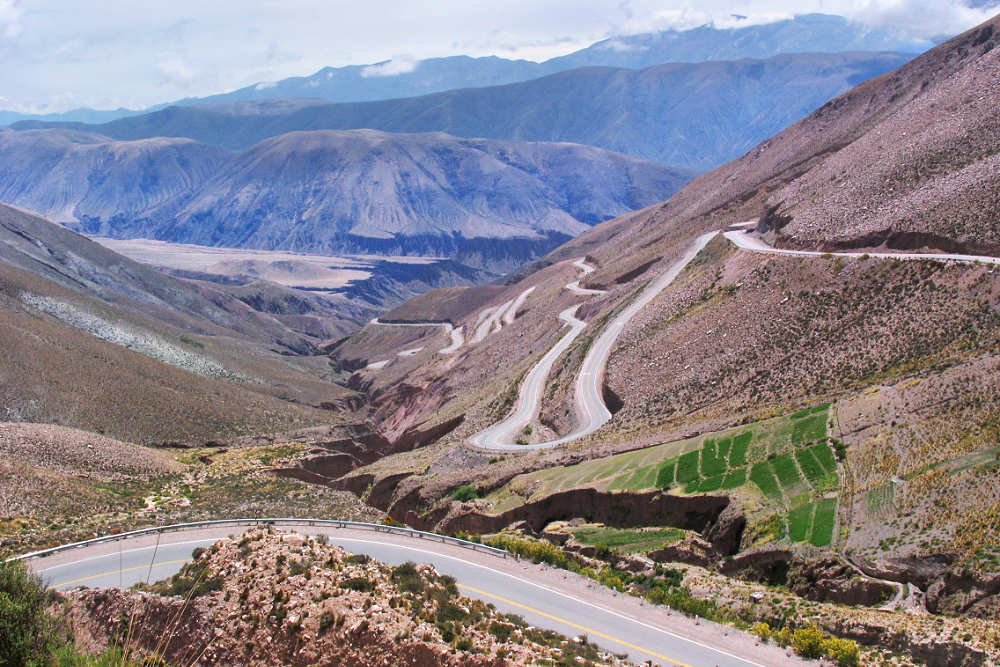 The road, fully paved, ascends winding up the majestic Cuesta de Lipan to the Abra de Potrerillos and the Altos del Morado pass, at an impressive altitude of 4,170 meters. From here the route descends again offering a spectacular panoramic view of the altiplano with the Salinas Grandes shining on the horizon. 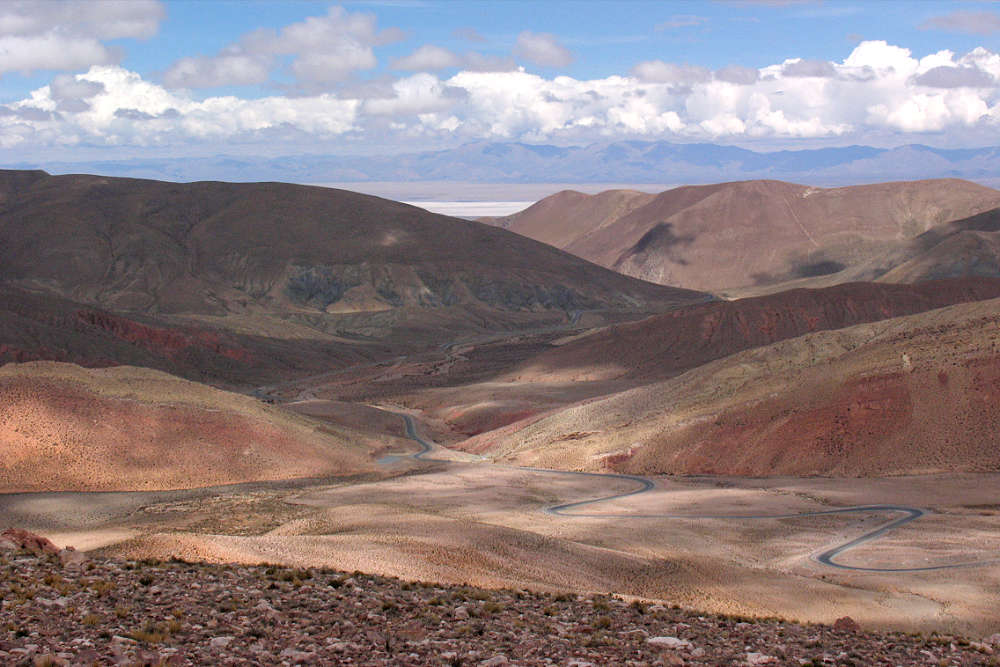 Road winding down to the salt flat

At the side of the road, you can spot herds of wild vicuñas fleeing cautiously, or groups of llamas grazing quietly waiting for their owner. 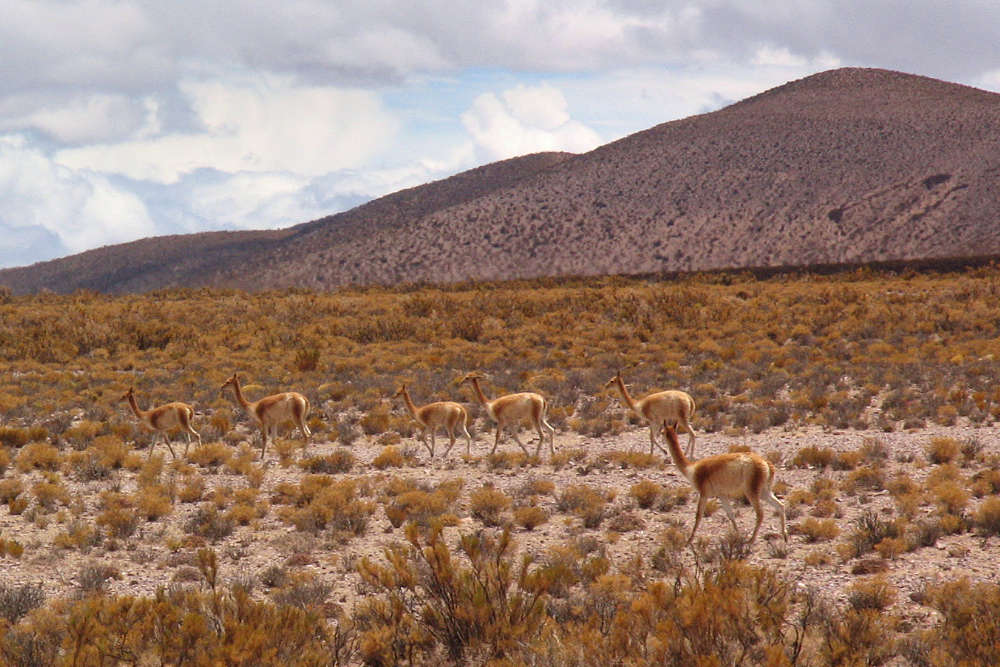 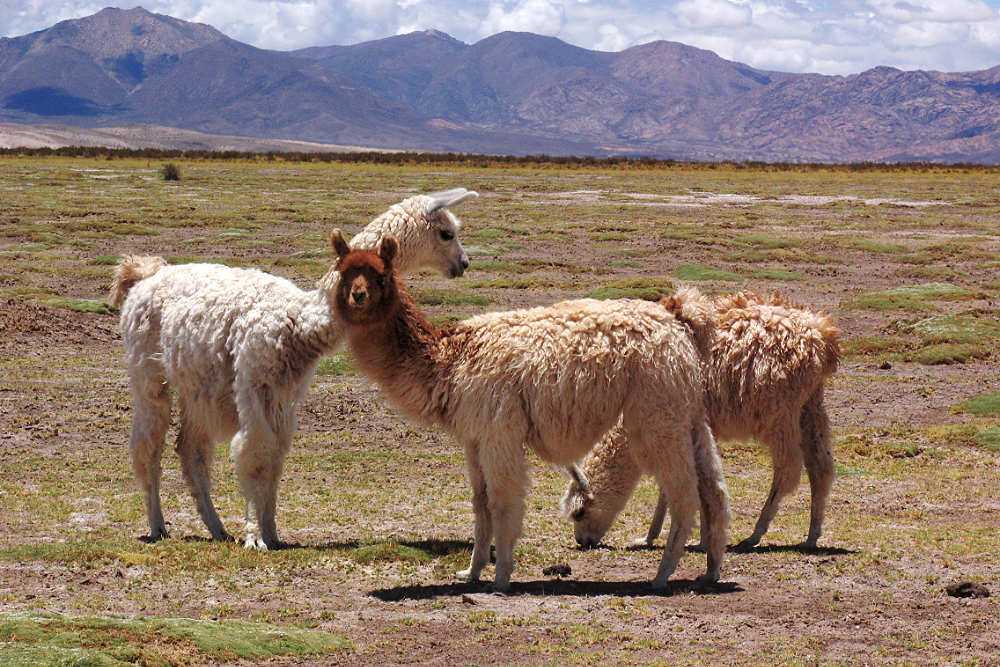 In the region of Salinas Grandes and the adjoining Guayatayoc Lagoon live some 33 communities of Kolla and Atakama indigenous peoples who are engaged in small-scale cattle breeding and subsistence agriculture. They also extract salt in a traditional and cooperative way, engage in community-based tourism and make handicrafts.

Salt flat ecosystems are extremely fragile, due to the scarcity of surface water resources. They have their origin in long and complex salinization processes in closed basins (endorheic), with dry geological periods that produce the gradual evaporation of water and the precipitation of salts, alternating with wet periods that cause their redissolution, in addition to volcanic events that distribute and deposit other types of minerals.

In summer the maximum temperature is about 28°C with a huge thermal amplitude between day and night. In winter the temperature drops to several degrees below zero. Rainfall is very low (between 300 and 400 mm per year). When it rains in summer, the salt flats are usually covered with a thin layer of water that produces surprising mirages. The hexagonal geometry of the salt crust

For a long time it was believed that the polygones on the surface originated when the salt crust cracked, but the regular shapes could not be explained. Recent studies indicate that during the evaporation process, the water near the surface becomes saltier and therefore heavier than the less salty water below, which produces a convection movement similar to the water in a pan that rises as it heats up, while the water at the surface descends. This process forms convection cells, which are squeezed together and whose boundaries form a hexagonal pattern. When the salt crystallizes at the surface, ridges are formed that trace the hexagonal edges of the convective cells below. 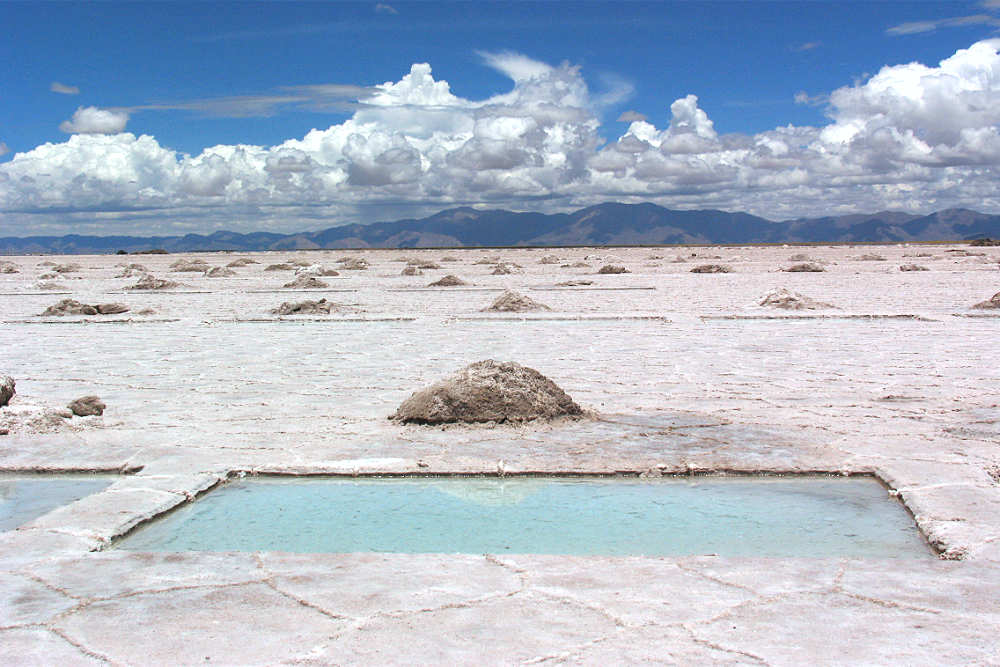 The harvesting of salt (sodium chloride or table salt) takes place between April and November, during the dry season. The crystallization pools built by the villagers measure 4 x 2 m, with a depth of 60 cm and a water height of 30 cm. The salt is left to "mature" for a year (evaporation). To harvest it, it is taken out of the pools and deposited on the side to dry for another month. 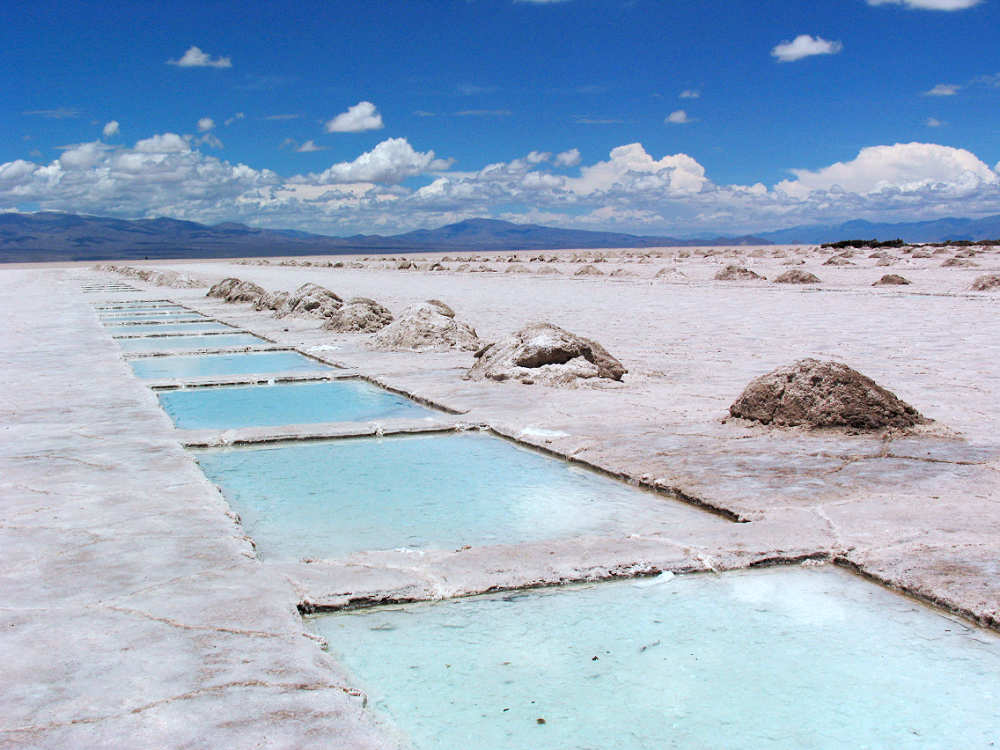 In 2019, the Salinas Grandes were selected as one of the 7 Argentine Natural Wonders, by a panel of experts and popular vote from all over the country.

Tourism is one of the activities that provide the greatest hope to local inhabitants for their economic development, especially from community-based tourism projects, in addition to short daily excursions from other destinations. As Awka Sumaj Sisa Liwen Antiman, founder of the Amawta Wasi Educational Center for Andean Art and Culture, points out: In the communities of Alfarcito, Pozo Colorado, Tres Pozos, tourism-related activities are already carried out all year round. The undertaking and strengthening of tourism activities from an ecological and sustainable perspective, especially through community-based tourism, transforms it into an industry that is friendly to the region. 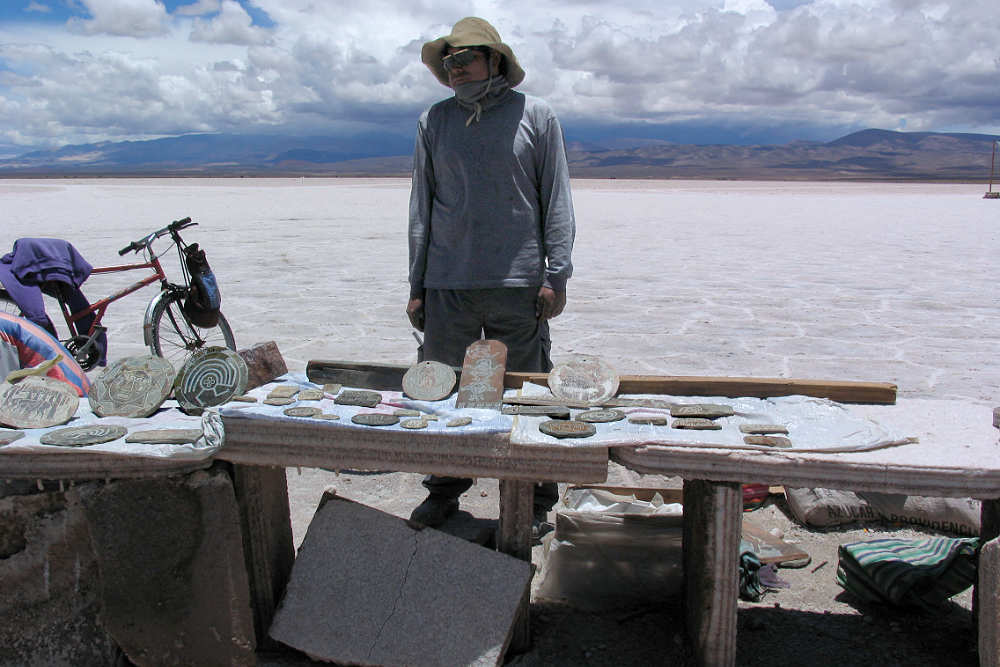 Original handicrafts on tables made of salt

For more than a decade, the native communities of Salinas Grandes have been carrying out a process of civil organization, demand for participation and consultation rights, and resistance against lithium mining, since the proposed industrial methods put the fragile ecology of the basin at risk and deplete the scarce water resources that are fundamental for the population.

To better understand the problems of lithium mining and the reasons for the communities' resistance, we have summarized here some information, indicating additional sources of consultation.

In recent years, lithium has become one of the strategic resources in the global transition towards the generation of clean energy and the implementation of transportation systems with low carbon dioxide emissions.

Lithium is an alkaline metal used especially in rechargeable electric batteries (lithium-ion batteries). Due to its solubility it is present in seawater and highly concentrated in closed basin brines (salt flats), with 22.4% of the world's reserves found in Argentina.

At the Salinas Grandes del Noroeste, total reserves are estimated to reach 216,987 tons of lithium carbonate. The exploration project is at an advanced stage, but the evaporation extraction method that currently prevails is considered destructive, as it depletes scarce water resources, drains wetlands and puts at risk the communities living there. Enormous amounts of water are needed to extract lithium, and this in one of the driest regions of the world. The exploitation of brine (groundwater with a high concentration of salts of mining interest) causes displacement of the groundwater beds and the mixing and thus salinization of the drinking water reservoirs. In addition, a large amount of potable water is used in various other production steps. Thus, the most essential resource for the population of the entire region is lost and the fragile ecosystem is thrown out of balance. If alternative extraction technologies to the evaporative separation method were used, the "waste" water could be replenished underground and the possible risks eventually minimized.

For more than a decade, the communities of the Kolla and Atakama indigenous peoples of Salinas Grandes and Laguna de Guayatayoc have been carrying out a process of civil organization and resistance through judicial channels, including the presentation to the Inter-American Commission on Human Rights to claim their rights to participation and consultation.

The 33 communities also jointly developed a protocol for the application of their rights. It was debated and developed over almost two years of work from the grassroots of the communities and finally approved in general assembly on August 22, 2015. The document entitled "Kachi Yupi (Footprints of Salt in Quechua) - Procedure for consultation and free, prior and informed consent for the indigenous communities of the Salinas Grandes and Laguna de Guayatayoc Basin" contextualizes the history of the Basin and explains the model of development that the peoples live communally, details the rights on which the document is based (incl. the National Constitution and the United Nations Declaration of the Rights of Indigenous Peoples) and develops the consultation process that the communities consider valid and that they are claiming.

Although the claim was presented to the provincial and national government, it has not been recognized so far, so the resistance continues.

"It has been twelve years since we started a peaceful struggle, we have taken our concern everywhere, we have asked for our rights as indigenous peoples to be respected, but nobody has listened to us, everybody ignores us. We are very worried because the Argentine government does not consider our situation, on the contrary, we see daily that the announcements of the imminent beginning of the lithium exploitation in our territory are growing.
We ask them to take the necessary measures to protect our territory, not to advance with the mining projects in the Salinas Grandes and Laguna de Guayatayoc basin, to allow us to continue living in peace, we ask them to respect our culture and to let us continue taking care -as our grandparents did- of this unique territory". (From a communiqué of the Mesa de comunidades de Salinas Grandes, December 2021)

The current challenge for all of us is to find a viable solution to the question: How can we face the devastating consequences of climate change caused by human activities that degrade the environment, without sacrificing unique regions, such as these salt flats of enormous ecological fragility and respecting the rights and needs of their original inhabitants?

Salinas Grandes del Noroeste
The salt flat is just 66 km from the town of Purmamarca. It can be easily reached via the paved RN 52 that crosses them.
Location on map