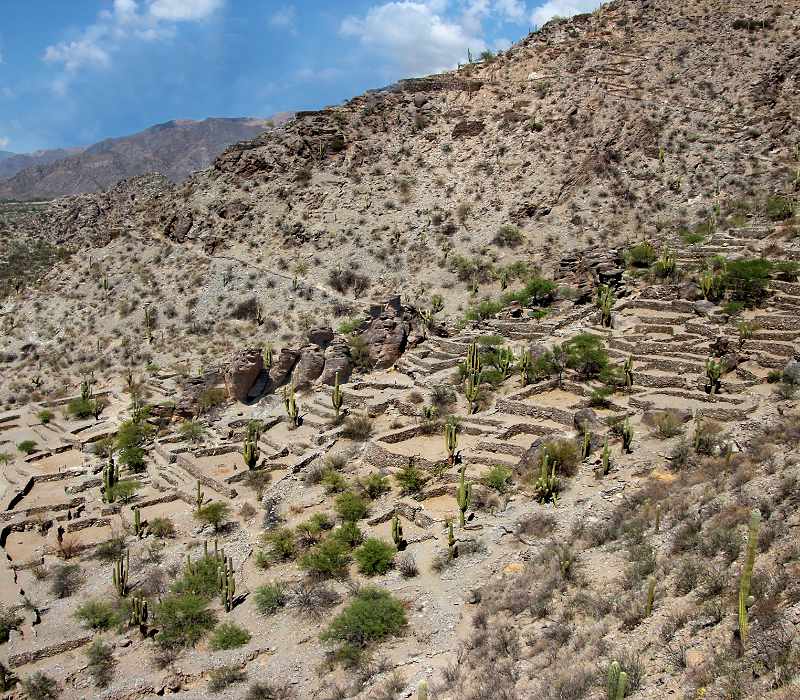 The ruins of Quilmes, in the province of Tucumán, are one of the largest archaeological sites in Argentina and a sacred place for the indigenous people after whom the site is named. Great historical symbolism stems from the fact that the Spanish conquerors were not able to defeat this last bastion of resistance until 130 years after their invasion (1535) of the northwest of what is now Argentina. After their defeat, the Quilmes were deported in 1665, part of them to the Rio de la Plata, to an area where the city that bears their name was later created - now part of Greater Buenos Aires. Only about 400 individuals survived the 1,400 km death march. An unknown number of the Quilmes were able to escape from the Spaniards and remain in their native region, where they had to hide their identity for a long time. (more below)

The settlement at the foot and on the slopes of the 2300 m high Alto del Rey was probably founded in the 10th century. The soil was fertile, there was sufficient water and from its strategically favorable position a central section of the trade routes through the valley of the river Santa María could be controlled. Fortifications and protective walls made it possible to well defend the upper part of the city in case of conflicts with neighbors. But also the Quilmes had to submit to the Tawantinsuyu (Inca Empire) when it expanded far to the south in the 15th century.

The Quilmes had achieved a high degree of social and economic organization. They laid out terraced fields reinforced with walls (pircas), which they irrigated through ditches and channels. For this purpose, they dammed mountain streams and rivers, the largest dam being 17 meters long. They also raised livestock, grazed animals, hunted game and maintained extensive exchange relations. In addition to pottery for everyday use, they made larger funerary urns. Bronze jewelry objects testify to their knowledge of metallurgy.

The areas to be visited today include the lower urban section, located at 1850 meters above sea level, and the upper one, which climbs up the slope, flanked by two fortifications, the pukarás, from which there is a panoramic view of the settlement and the valley, all the way to the Santa María River. This reconstructed area, however, represents only 15% of the ancient Quilmes settlement. The larger unexcavated portion extends southwest and west of it along the Río Las Agüitas. In its heyday, about 4,000 people may have lived here and at least as many in smaller settlements in the surrounding areas.

The reconstructed foundation walls show the nested structure with closely adjoining buildings on paths, terraces and squares. It is assumed that the square and rectangular structures served mainly for living purposes and the partly round annexes were storage facilities. The walls are so thick because they consist of an outer shell of piled up stones or slabs and the space in between is filled and consolidated with pebbles and earth. More information about this on the image pages of our photo tour.

After many years of legal proceedings and disputes to regain their own territory, guaranteed to them by a Cédula Real (Royal Charta) in 1716, the descendants of the founders occupied the archaeological site in 2008 and renamed it Ciudad Sagrada de Quilmes (Sacred City of the Quilmes). This renaming is also meant to point out that these are not ruins of an extinct people, "but a space of continuity between the ancestors and the living," as well as the "proof of pre-existence to politically defend the current rights over the territory and over one's own history." (Tolosa, p. 66)

Since February 2018, there is a Centro de Interpretación where information about the myths, daily life, customs and organization of the Quilmes is provided and objects of their culture are exhibited. 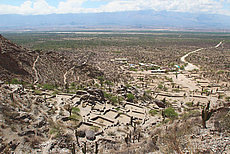 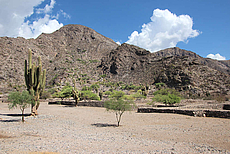 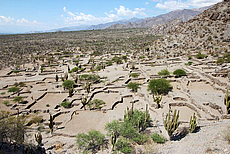 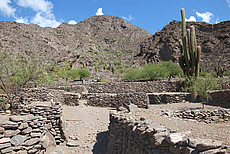 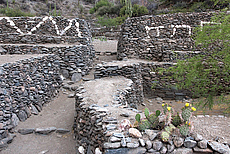 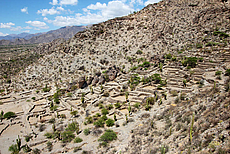 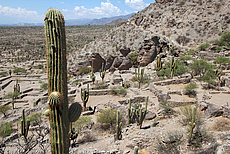 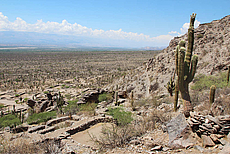 After the Spanish conquistadores defeated the Inca Empire and advanced into northwestern Argentina as of 1535, the Quilmes and other indigenous groups in the Santa María River Valley allied against them. The first great uprising, from 1560 to 1563, was led by the cacique Juan Calchaquí of Tolombón. The wars against the Spaniards in the region (Guerras Calchaquíes) the Calchaquí River and the chain of valleys on the eastern edge of the Andes in the provinces of Salta, Tucumán and Catamarca (Valles Calchaquíes) were named the after this cacique.

The Second Calchaquí War lasted from 1630 to 1637, ending with the Spaniards executing the leader, the local ruler (curaca) Chalamín, and deporting the inhabitants of the Señorío (landlordship) Diaguita as slaves to other places.

In the Third and Final Calchaquí War, from 1658 to 1667, the Andalusian adventurer Pedro Bohórquez initially placed himself as the head of the insurgents, claiming that he was the Inca Hualpa, a descendant of the last Inca ruler. However, in 1659 Bohórquez surrendered to the Spanish in hopes of a pardon, but was imprisoned and executed by them. The Quilmes were the last to continue fighting until their final defeat in 1665.

The Spaniards sent the Quilmes to forced labor in distant places. 250 families were forced to go to Córdoba, and others to several towns in northwestern Argentina. A large group was forced to undertake a march, deadly for most, to the banks of the Río de la Plata, 1400 kilometers away. The Reducción de la Santa Cruz de los Kilmes, founded after their arrival in 1666 and home to only 347 members of the indigenous group in 1680, later developed into the city of Quilmes, now part of the southern metropolitan area of the capital Buenos Aires.

An unknown number of Quilmes managed to escape from the Spaniards and survive among other ethnic groups in the valley. In addition, the Spaniard Luis de Toledo y Velazco, who had inherited the "Encomienda de Quilmes," claimed his right to exploit them as a labour force, so some Quilmes families were sent back to him to Tucumán. (Endere, p. 79) They are all considered the ancestors of today's Comunidad India Quilmes, in whose care the archaeological site is today.

Although the ruins of Quilmes have of course always been known to the indigenous communities of the region, the year 1888, when archaeologist Samuel Alejandro Lafone Quevedo was there and wrote about them, is considered the date of their "discovery." After briefly visiting Quilmes in 1893, Dutch anthropologist Herman Frederik Carel ten Kate commented on the good condition of the ruins, as well as on the petroglyphs in a nearby ravine.

Juan Bautista Ambrosetti (1865 - 1917), who together with his disciple Salvador Debenedetti (1884 - 1930) is considered the founder of archaeology in Argentina, began the systematic study of the ruins of Quilmes in 1897 and published their detailed description in a book in the same year.

Carlos Rodolfo Schreiter (1877-1942) wrote about findings of infant burials in funerary urns in a cemetery in Quilmes in 1919. In 1928, he illustrated in a publication a series of petroglyphs with stylized human and animal figures that he discovered in the Quilmes Canyon near the cultivation terraces. (Sosa, p. 9)

Adán Quiroga described in his 1929 book "Folklore calchaquí" some pieces of "very fine fabric" that he found in the Quilmes area. Although the ruins were visited again and again thereafter, there were no further published studies until 1978. (Sosa, p. 9)

In connection with the 1978 World Cup in Argentina, which at that time was ruled by a military dictatorship (1976-1983), more foreign tourists were expected in the country who would ignore the state terror. The authorities of Tucumán wanted to use the opportunity to improve the image of the province, which was known for terrible violence, and to do something about the economic crisis there. As part of the program NOA Turístico of the national government and the northwestern provinces, several cultural heritage sites also in Tucumán were prepared for tourist use.

Particularly high were the hopes of turning Quilmes into a kind of "Machu Picchu of Tucumán" (Sosa, p. 11). Under the direction of Norberto Pelissero (director of the Instituto Interdisciplinario Tilcara) and Horacio Difrieri (director of the Instituto de Geografía "R. Ardissone"), the ruins were reconstructed without following basic principles of research, restoration and documentation of an archaeological site. Thus, one principle should have been to preserve and incorporate as much as possible of the original substance of the site and the buildings, and not simply to rebuild them.

Local workers cleared the site of vegetation, fortified terraces, foundation walls and a dam. Only after that, excavations were supposed to take place in order to obtain information about the history of the site and to collect exhibits for the museum, but this did not happen. On the contrary, a lot of findings were looted. On July 9, 1978, the site was inaugurated, but the works probably continued until 1980.

In the book by Pelissero and Difrieri (1981), published at that time by the provincial government, there is a historical section in which the Calchaquí wars and the resistance of the Quilmes are mentioned only in passing. It is claimed that even before the Spanish conquest, indigenous groups had exceeded the "maximum carrying capacity of their geosystem" and that the Quilmes had already disappeared as a group before they became extinct - which we know is not the case. (Endere, p. 81)

Ciudad Sagrada de Quilmes
From Cafayate on Ruta 40 about 50 km south, then on a signposted turnoff 4.5 km west.
About 185 km from the provincial capital of Tucumán.
Location on map