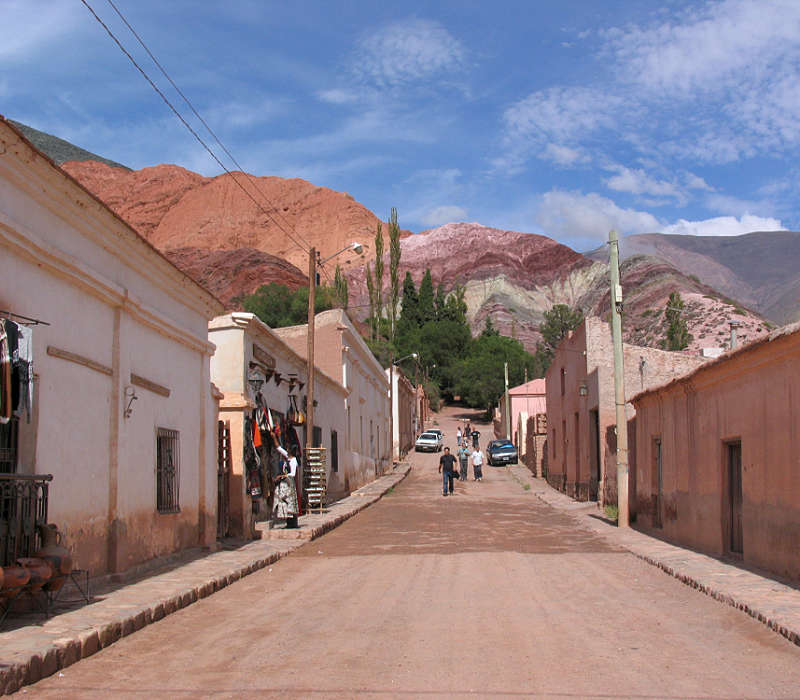 The Quebrada del Purmamarca is a valley that runs transversally to the Quebrada de Humahuaca and also part of the road system of pre-Hispanic origin and cultural landscape valued as a World Heritage Site. It connects with the Salinas Grandes and the high plateau of the Puna crossing to Chile.

The village of Purmamarca near the entrance to the Quebrada, 4 kilometers from National Route 9, is one of the most beautiful and emblematic of NW Argentina. It is located at an altitude of 2,275 m at the foot of the famous Cerro de los Siete Colores. It has about 900 inhabitants (2010 census). Houses of traditional adobe architecture enclose orchards and wooded courtyards. This has given Purmamarca the character of an "orchard city", which can still be appreciated by looking down from the hills.

A rectangular square defines the center of the village, in front of which is the church with a large atrium, surrounded by trees and enclosed by a low wall. The antiquity of the village and its chapel dates back to the end of the 16th century. However, a lintel above the church door bears the date 1648, probably indicating a date of reconstruction. Dedicated to Santa Rosa de Lima, it has an architecture of simple volumes, a single tower and thick adobe walls plastered with lime, set on stone foundations. On the side street of the church there are two magnificent carob trees on the roadway - one of them historical and of great size, which is said to be more than 600 years old. Under its shade it is claimed that the troops of General Manuel Belgrano took a rest at the time of the fight for independence (1810-1816).

On the other side of the square, a single-story adobe building with a six-arched portico is noteworthy. It was built in the mid-19th century with "cabildo"-type architectural features. At the end of the 20th century it housed a public library and after remodelations in 2010 it was converted into the Cultural Center of Purmamarca.

Traditional products and handicrafts can be purchased at the Handicrafts Fair that is permanently located at the square, as well as in the surrounding shops. The patronal feast of Purmamarca in honor of Santa Rosa de Lima is celebrated on August 30, with religious acts, sikuris, misachicos.

Going up the street that borders the village, passing by the cemetery, you can access the Paseo de Los Colorados, a 40-minute (3 km) walk that offers spectacular views of Purmamarca and the Cerro de los Siete Colores.

(Summarized from information of the UNESCO Nomination of the Quebrada de Humahuaca, and other sources.) 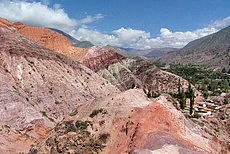 Hill of the Seven Colors 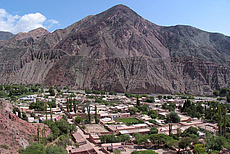 View from the hills 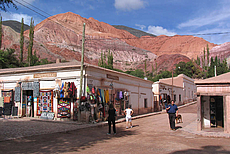 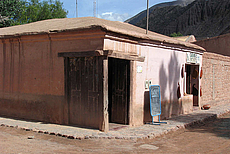 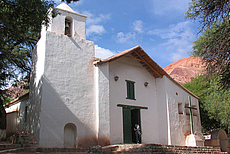 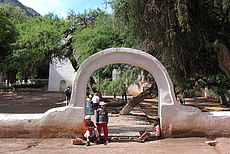 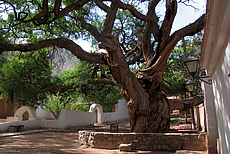 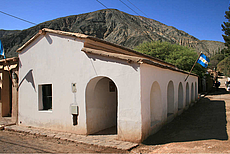 The siku is a traditional wind instrument of the Andean high plateau, usually consisting of two rows of cane tubes of different lengths, similar to a pan flute. The sounds are produced by blowing over the hole of each of the tubes perpendicular to its axis, resting the lower lip on the rim. It is an instrument that is present in most traditional homes.

Whoever plays a siku is a sikuri. In the framework of a band, it is played in the form of a dialogue in which the melody is constructed by alternating the execution of the notes that form it between two or more musicians, accompanied by drums, snare drums, and matracas.

Offering their music to the Virgin and pilgrimages during Holy Week or other religious festivities are the most important events for the sikuris bands. In the last decades more and more women are participating in the sikuris bands. There are even several all female bands.

Misachicos are small processions organized by families or groups carrying the image of a saint (belonging to a chapel or a family) adorned with ribbons and flowers. The march can last hours or days, according to the distance to be covered. It is accompanied by sikuris (players of siku, the Andean pan flute) or other instrumental groups, religious chants and, sometimes, groups of dancers.