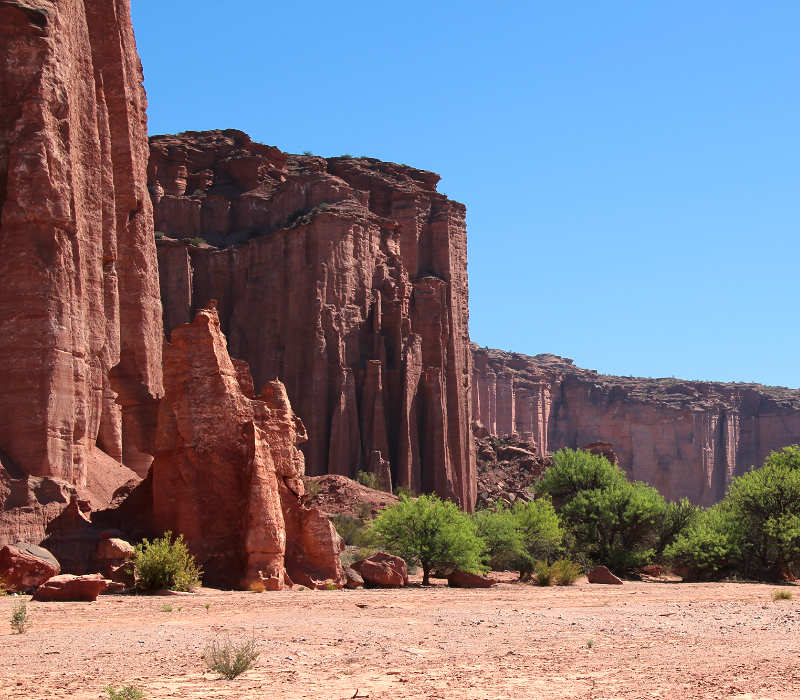 The stunning sandstone cliffs of Talampaya, with their unique rock formations and petroglyphs, offer an unforgettable journey into the past, inviting to appreciate the beauty of a landscape formed by tectonics and erosion over millions of years, and to discover the mysterious inscriptions that its ancient inhabitants have left on the rocks.

Talampaya and the neighboring Park Ischigualasto have been jointly inscribed as UNESCO World Heritage, being the only place in the world where fossilized remains of prehistoric animals and plants have been found, that reveal the evolution of life in the Triassic Period. At about 60 km from the town of Villa Unión in the province La Rioja, the Talampaya National Park extends 215,000 ha on the western border of the Sierras Pampeanas within Argentina's ecoregion called "monte", a dry thorn scrub and grasslands area along the Andean foothills. Its exceptional landscape is known for its red sandstone cliffs reaching 200 metres in height at the Canyon of Talampaya.

Highlights of the Talampaya Canyon

Visits to the Talampaya National Park are only allowed in organized tours accompanied by a guide. Directly booked at the park's entrance, they are done in specialized vehicles that stop at several stations where you can take short walks.

You can also book online, for example, the most popular site tours via Civitatis or a completely organized trip via TourRadar. 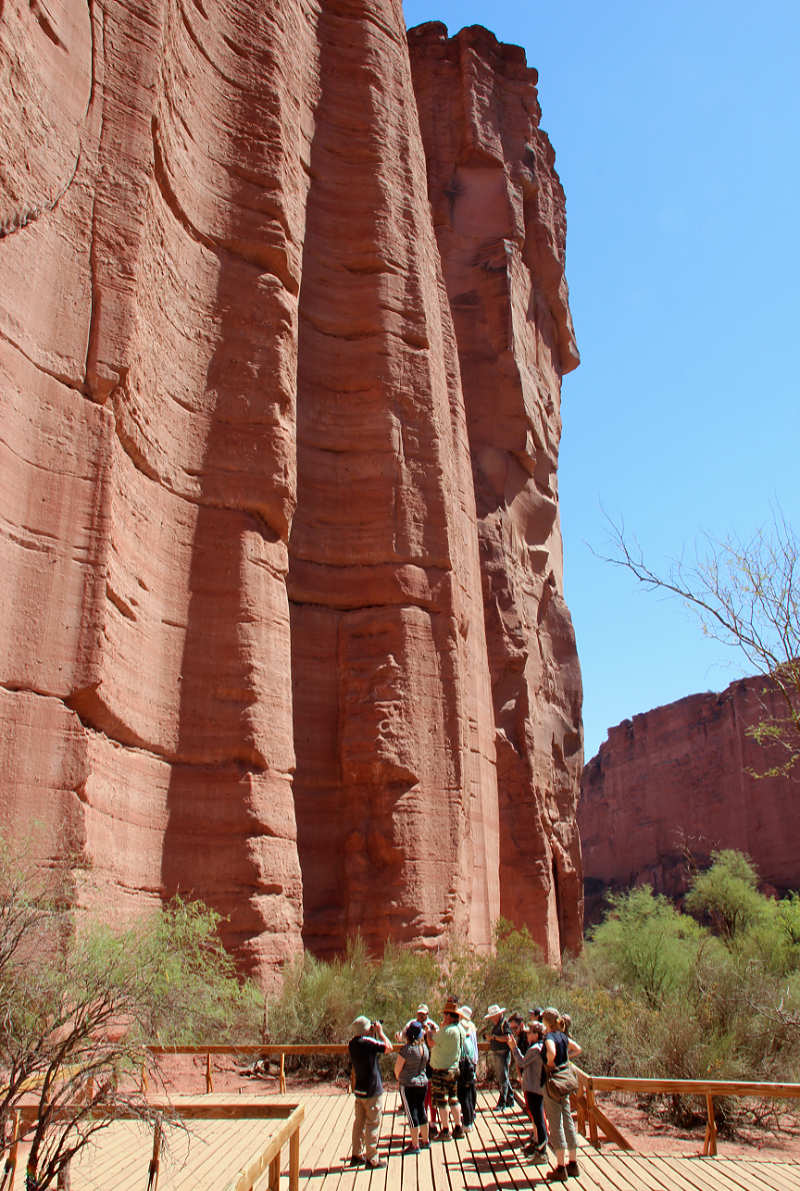 At the station called Botanical Garden you can appreciate the flora of the area, characterized as a shrub steppe with a predominance of jarillas, accompanied by several species of cactus, retama bushes, carob trees, chañar trees, as well as green bark shrubs called brea.

From the base to the top of the vertical cliff wall you will see a large cylindrical groove, a product of water erosion, which has been called "The Chimney" and that produces a remarkable echo effect. 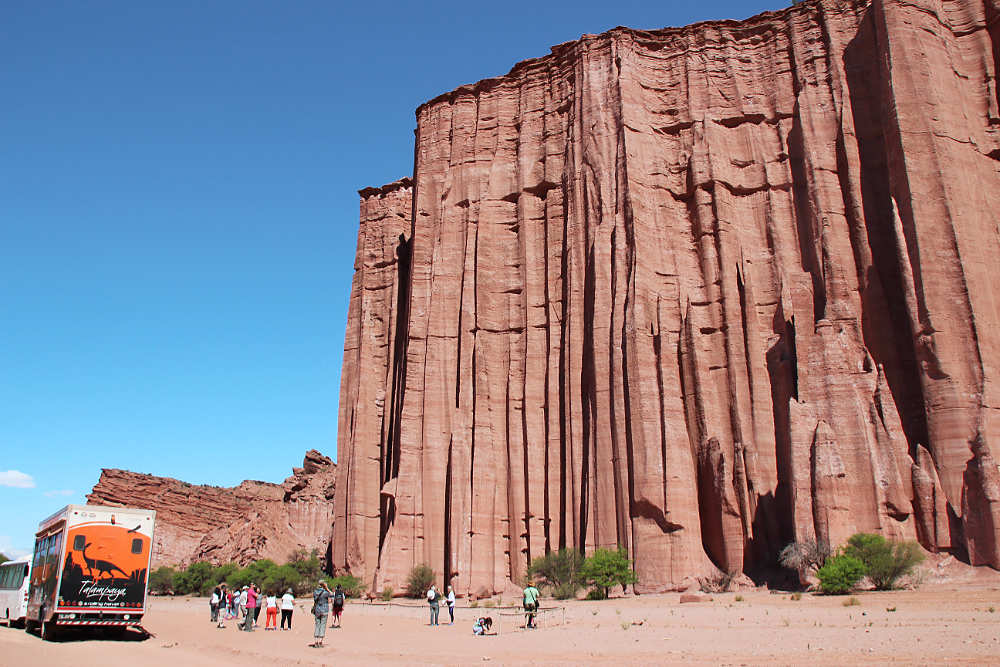 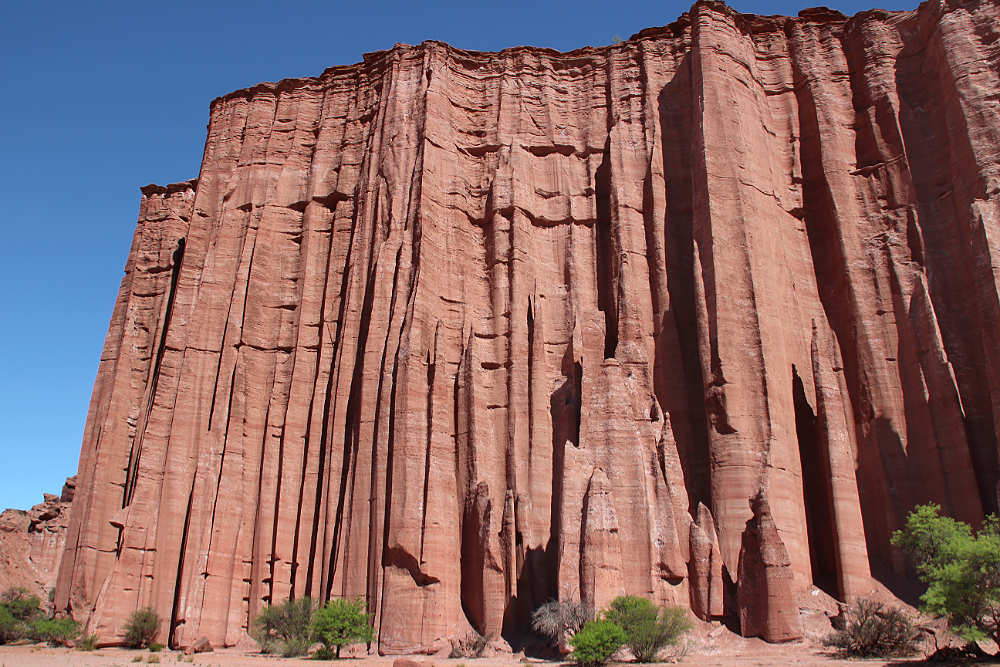 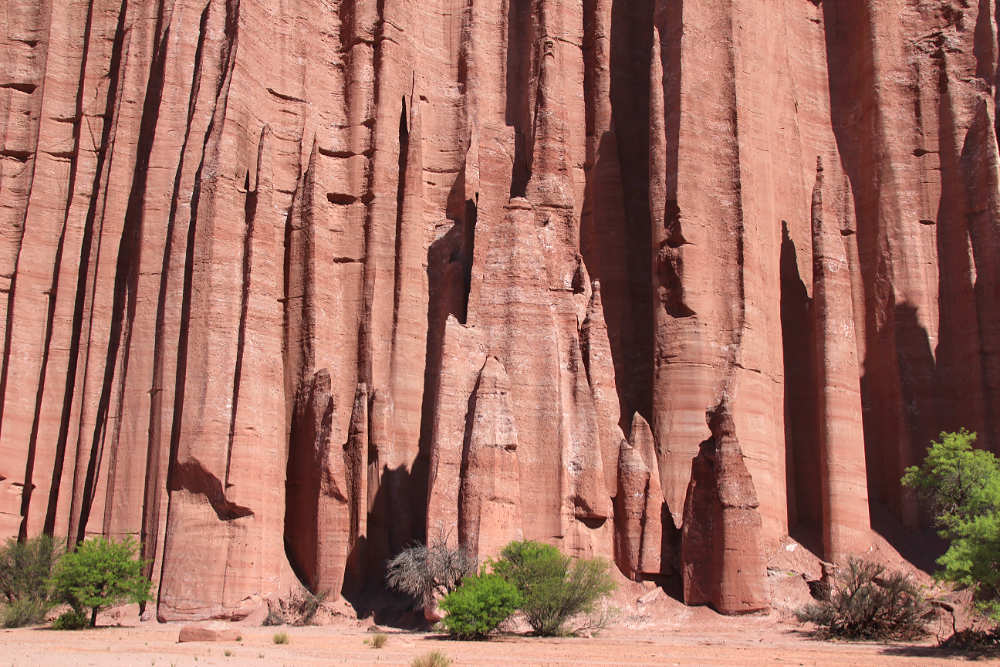 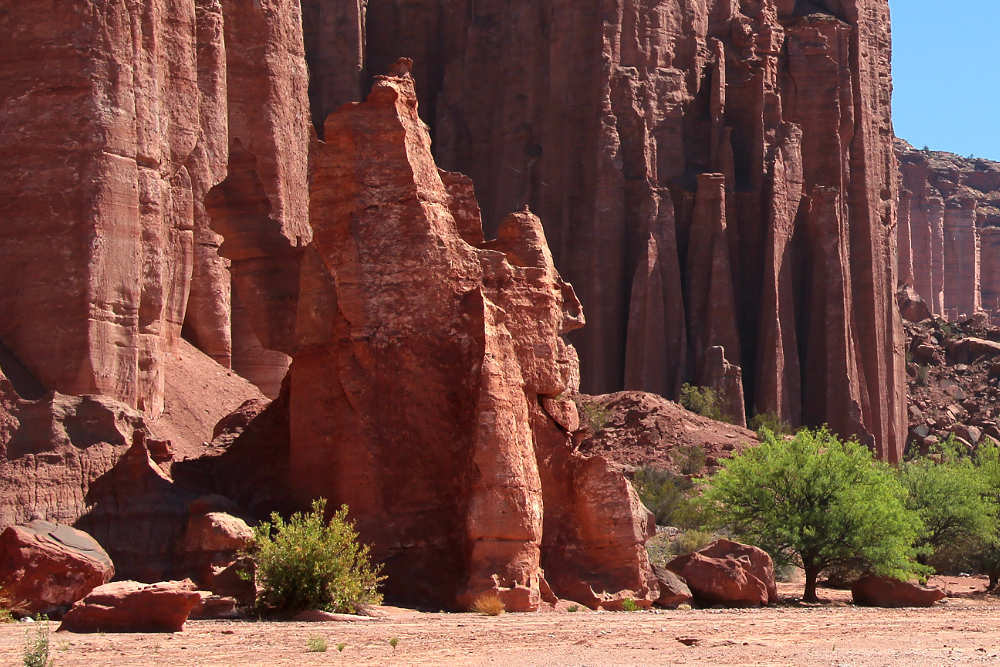 Impressive rocky outcrops with strange shapes eroded by wind and water spark the imagination of locals and visitors, recognizing them with popular names. In front of the so-called "Cathedral" for its needle-like formations, there is a strange geoform in wich the people recognize a "Magician King" (see in the sliding photos above). 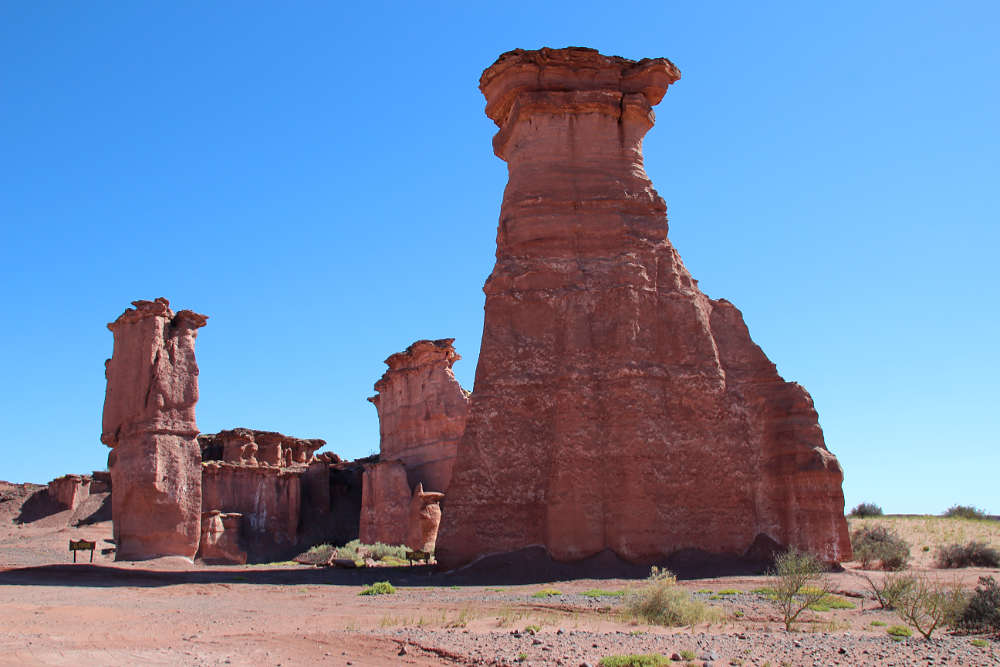 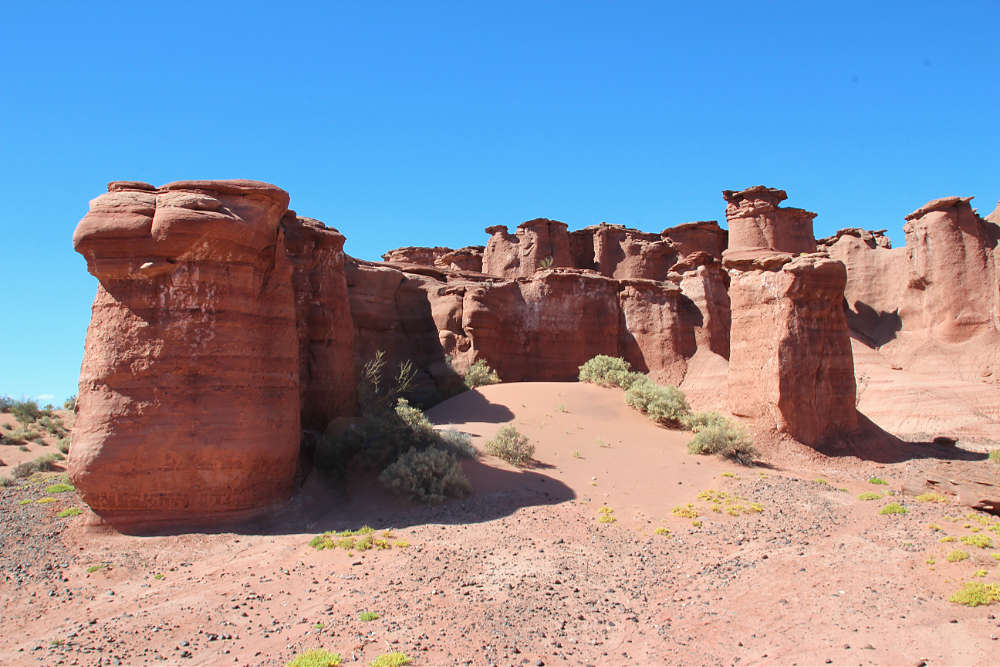 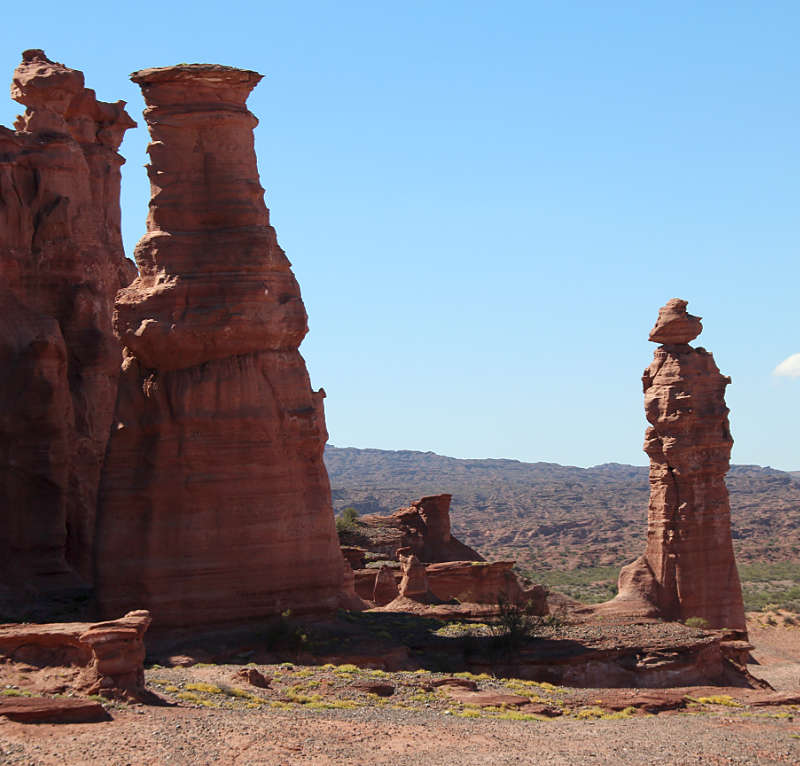 Along the way, in addition to unique rock formations, you can enjoy spectacular panoramic views. 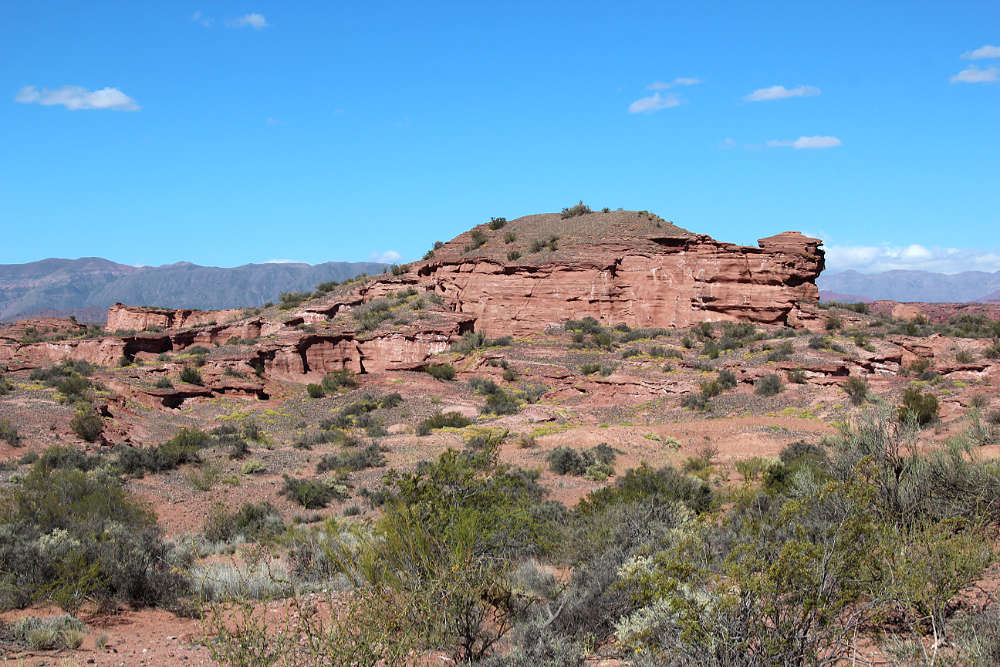 While this rock sparks the visitors' imagination thinking of this animal, it is worthy to note that in Talampaya the fossilized remains of one of the oldest turtles the world were found, which measured about 60 cm long. Dated between 210 and 220 million years old (Late Triassic), it was named Palaeochersis talampayensis. 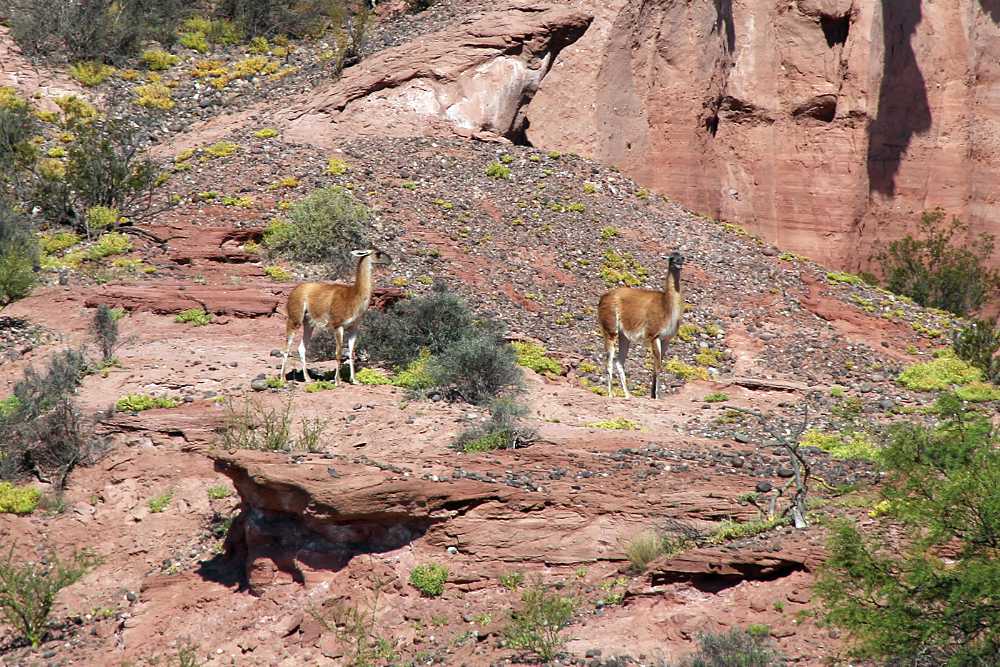 Talampaya is also a privileged place for wildlife observation. 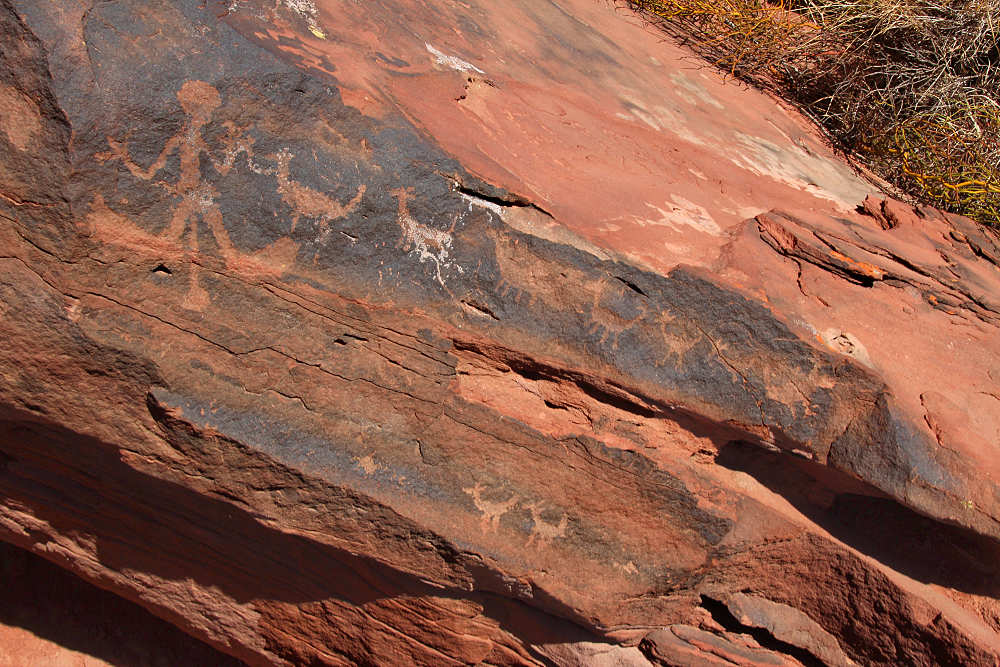 Within this astounding scenery, collective mortars carved into the rocks, and 1,500 year-old petroglyphs bear testimony to the activities and beliefs of early inhabitants of the region. 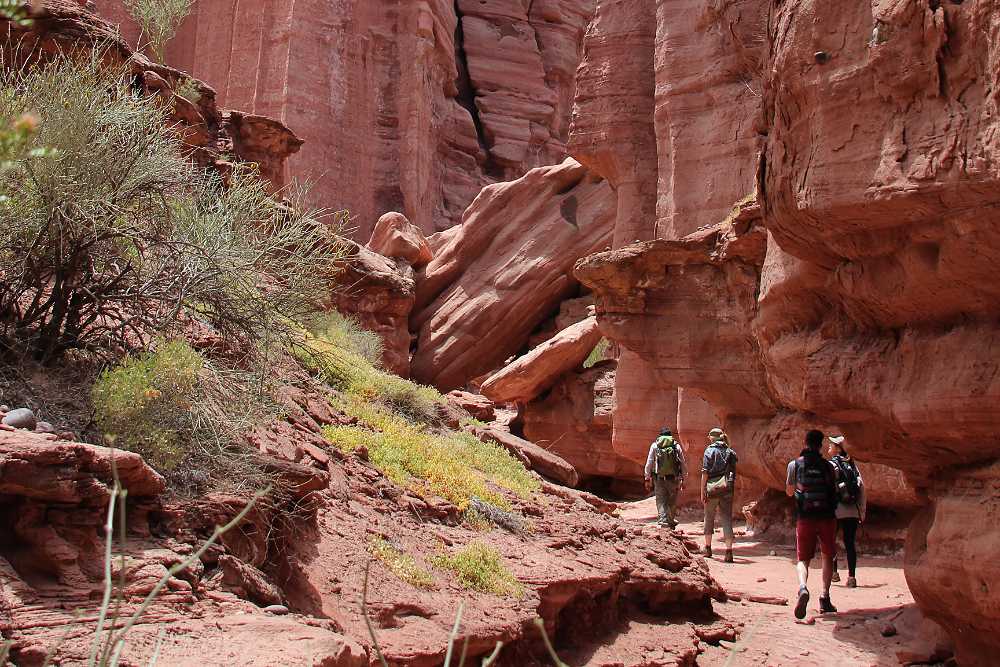 Hikes with a local guide intensify the experience of the place, accessing spectacular viewpoints, discovering fantastic rock formations, learning about wildlife and flora, and the ecological challenges. 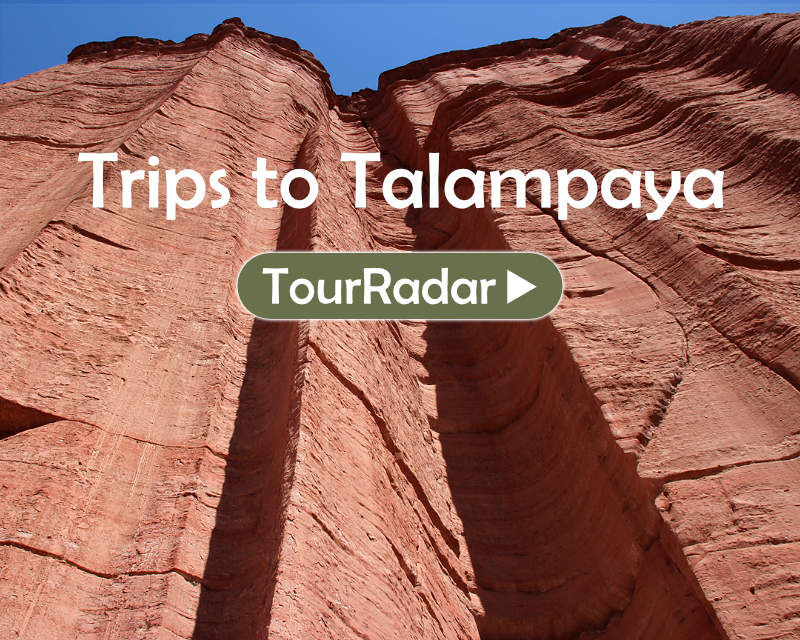 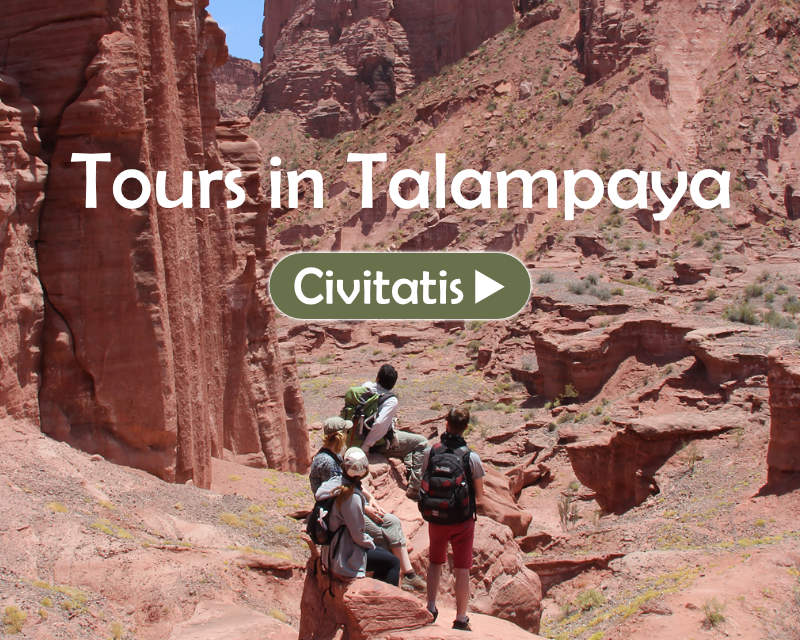 Talampaya National Park
Located in the south of the province of La Rioja, on the border with San Juan, about 60 km from the city of Villa Unión. It is accessed via National Route Nº 76 that crosses the park.

Talampaya (which means "dry river of the tala" - a local tree) can be visited all year round. It is advisable to wear light and warm clothing both in winter and summer due to the wide temperature range, which can reach -10º C in winter and 45º C in summer.