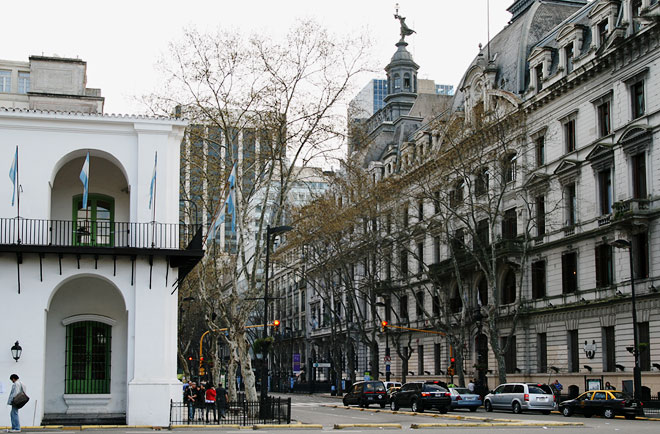 The building, inaugurated in 1898 for the newspaper "La Prensa" is a national architectural monument. The facade was designed in France, commissioned by the newspaper's owner, Dr. José C. Paz. The engineers Carlos Agote and Alberto Gainza realized the definitive project in Buenos Aires. Characteristic is its light tower crowned with a sculpture of a goddess of wisdom or victory, a work by the French sculptor Maurice Bouval (1863 - 1916).

The building was declared national historical monument in 1995. The City's government is in the process of restoring and refunctionalizing its premises.
In the lavish Salón Dorado, an assembly hall on the first floor, the newspaper used to organize weekly meetings. Distinguished personalities from Argentina and abroad gave conferences there, among them Jorge Luis Borges. Currently it is used for concerts and cultural events.

The subterranean floors, where formerly the newspaper's printing machines used to run, were transformed into the exhibition spaces of the cultural center. The inner courtyard, as well as the Pasaje Ana Díaz on the first floor - a passage communicating with the City Government Palace - are also used for visual art exhibitions. Photographic works by 45 artists in the former La Prensa building. Part of the Festival of Light.