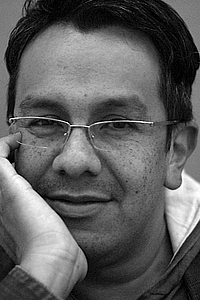 Binder & Haupt: We’ve read that in March earlier this year you gave a talk at the Museum of Antioquia entitled "The exhibition format, between Salons and Biennales" in preparation for the 43rd National Salon of Artists, in which you advocated for new exhibition formats and mechanisms with unconventional strategies. Would you please briefly elaborate?

Jaime Cerón: In the talk "The exhibition format, between Salons and Biennales" I addressed some of the transformations the Salon of Artists Program in Colombia has undergone in the last decade. This program comprises two kinds of exhibition formats, the regional salons and the national salon, which address artistic practices regarding territory and cultural context. The National Salon was created 73 years ago and from the start it faced a series of challenges as the "salon" as an exhibition model comes from another place and time. During these years, 42 editions of this event have taken place, which have usually been accompanied by interesting discussions that have pointed out the limitations of the salon as an exhibition model to articulate and project any kind of understanding about the artistic practices in Colombia. Since 1976, Regional Salons of Artists were organized, which were created as an antechamber to the National Salon and have undergone important transformations in their conception and structure during their last 4 editions. In the talk, I went through some of the alternatives that have been put forward to the "salon" model within the National Salon of Artists and explored other exhibition projects supported by different representation structures.

B & H: In the press, it was said that the Ministry of Culture tried to reformulate the conceptual framework and the curatorial design of this edition of the Salon. What exactly does this reformulation imply? In the two previous versions of the Salon, foreign artists took part next to Colombian artists. Should we expect a higher level of inclusion this year?

JC: The conceptual transformation really began in 1998, when a text about the limitations of the salon model – which involves a public open call with selection juries, a large exhibition and a prize – was published. The text featured possible alternatives and resulted in the execution of the Pentágono Project [1], which brought about many open debates with the participation of people from the arts field in the following years. There, the discomfort generated by the name "National Salon" was put forward, but by broad consensus it was decided to keep the name – as it was widely recognized by the general public and the media – but to change its structure. In fact, the National Museum of Colombia organized a historic exhibition about the event and called it "Marca Registrada" (Trademark) referring to the persistence of a name that originated many years in the past. [2]

In 2004, the regional salons stopped being organized by open calls and juries and were commissioned to groups of curators (who participate for a curatorial research grant with a project) who travel throughout the country looking for artists and propose contexts and exhibition platforms. Ten grants are given out and the exhibitions are held in several cities. Four versions of this new modality have taken place and the results got better and better. This change in the conception of the regional salons has generated many questions about how the National Salon should be, and in the last two versions (salons 41 and 42) the curatorial teams thought about how to connect the regional salons with the National Salon and have decided to include international artists as a strategy to understand the conceptual "limits" of Colombian art, if any.

For the 43rd Salon, this revision continued, attempting to learn from the gaps of previous versions and the big issue was to decide what should be the connection between the 10 exhibition projects. This was done by the curatorial teams from the regional salons, within the context of the National Salon. We employed many strategies to find an alternative, and this was solved by realizing that as the regional salons have achieved great recognition in the different artistic contexts in Colombia they shouldn’t be thought as antechambers to the National Salon but as autonomous and self-sufficient projects in their own right. On that basis, the only link between the two platforms is the group of artists identified by the curators of the regional projects. So the artists were asked for a portfolio to be sent to the artistic director and the curators of the National Salon to serve as a reference point to the understanding of contemporary Colombian art. That was the starting point for the curators of the 43rd National Salon, who defined autonomously the conceptual approach of the exhibition and decided that both Colombian and foreign artists should participate. They also decided to add the prefix "(inter)," in lower case and in brackets, to the title of the exhibition, indicating the need to rethink the generic name that the exhibition should have in the future.

B & H: How is the selection process for the venue of each National Salon of Artists? Can the cities put themselves forward for selection? Which are the decisive factors for a town to be selected?

JC: The idea is that the town that wants to be the venue of the Salon fully commits to its realization and complies with the minimum requirements established by the Ministry. These requirements have to do basically with the available area – in terms of exhibition spaces – and to be able to invest the necessary financial resources that are needed besides the funds provided by the Ministry of Culture.

B & H: Will the touring concept of the National Salon of Artists be kept in the future? It’s no doubt an interesting feature for the activation and promotion of the respective local and regional artistic scenes in Colombia, but one wonders, naturally, how many towns have the necessary means and infrastructure to pull off such a demanding event.

JC: So far, the event has taken place twice in Cartagena; once in Cartagena, Santa Marta and Barranquilla; once in Cali and twice in Medellin. The other versions were held in Bogota. At the moment, there is an evident interest in the Coffee Triangle, where the towns of Armenia, Manizales and Pereira are located – only one hour’s drive apart from each other – which could house an exhibition project of the scope of the Salon. I believe it’s possible that one or two other towns could be considered as venues before repeating the ones that have already hosted the exhibition.

B&H: Words such as "National" and "Salon" in the name could jeopardize the communication of the international and innovative ambition of the event. Why is the traditional name maintained, only slightly modified?

JC: The main reason to keep using the name, as I said before, is because many Colombian artists (particularly those over 60 years of age) believe that it is beneficial to point to the permanence of this event (73 years, 43 versions, etc.) and they think that the recognition of the media and the public can be an advantage to the extent that they see the name "National Salon" as a "trademark". However, it’s possible that in a new institutional reflection and in a new public debate, other ways of capitalizing the history and making more apparent what is at stake in this project could emerge. In the last six years, the name of the event has become a subtitle and the name of the exhibition project per se has become more relevant, as it happens this year with SABER DESCONOCER.

Jaime Cerón
* 1967 Bogotá, Colombia.
He graduated with a degree in visual arts from the National University of Colombia where he also did a Master’s Degree in History and Theory of Art. His work has been focused on five core areas: teaching, critique, curatorship, theoretic research and cultural management, which he has pursued concurrently and continuously since 1994. He taught at the art departments of the following universities: Jorge Tadeo Lozano, Los Andes, Javeriana and National, and at the Superior Academy of Arts of Bogota. In 1997, he linked up with the District Institute of Culture and Tourism where he was Manager of Visual Arts until July, 2007. He worked as an art critic and independent curator until September, 2010 and he has been Visual Arts Consultant for the Ministry of Culture since October of the same year.