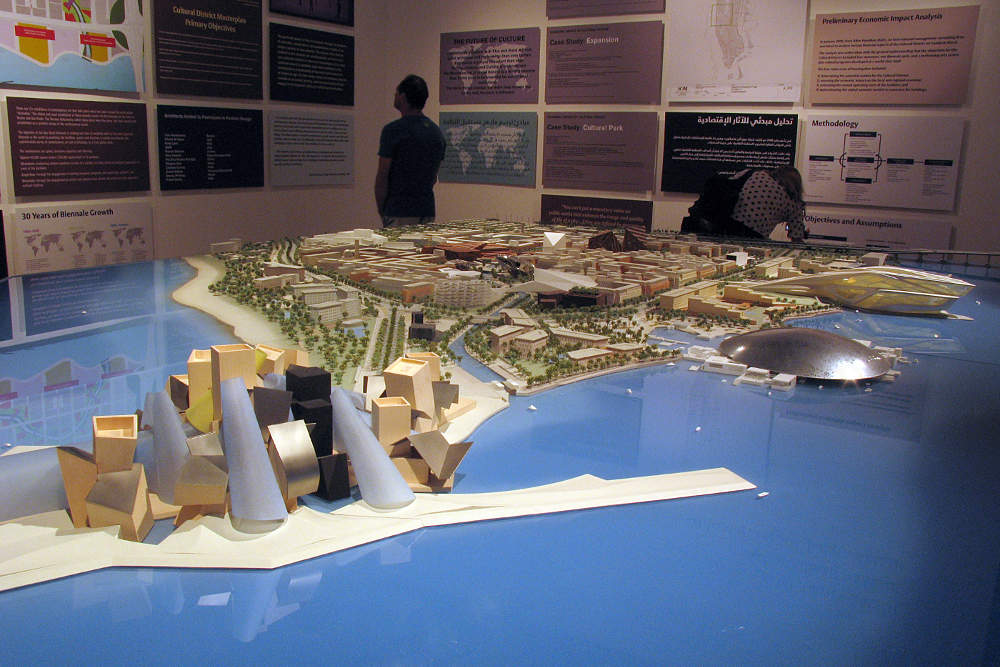 Until recently, Abu Dhabi wasn’t exactly noted for special cultural ambitions. These seemed to be left up to Sharjah, which was long regarded as the undisputed cultural center of the United Arab Emirates. In 1998, Sharjah was even the UNESCO cultural capital of the Arab world. [1] But it is now well known that, with the Cultural District on the island of Saadiyat, Abu Dhabi wants world-class ranking in this area, too. The question is the degree to which this goes beyond mere tourism marketing and image building.

The cultural sites on Saadiyat are part of a gigantic development project that aims to make the "Island of Happiness" the most important destination and motor of tourism in Abu Dhabi. Accordingly, they too lie in the purview of the Tourism Development & Investment Company (TDIC). The latter not only ordered a Guggenheim Abu Dhabi from the Guggenheim Foundation in New York, but a master plan for the entire Cultural District. As commissioned, the team under Foundation Director Thomas Krens conceived a "critical mass" [2] of museums and other cultural facilities for which money was apparently no object and whose announcement triggered the desired media hype.

If one talks with insiders of the political and cultural scene in Abu Dhabi, one learns that the Saadiyat Culture District is tied to expectations that go beyond an increase in the number of tourists and an enhancement of reputation. Without a doubt, operating the diverse cultural sites will have far-reaching effects on the emirate, the country, and the region – which apparently corresponds exactly with the initiators’ intentions.

The historian Frauke Heard-Bey [3], who has lived in Abu Dhabi since 1967, elucidates the new openness as a consequence of a change of generations and power after the death of Sheik Zayed bin Sultan Al Nahyan [4] in November 2004. In the almost four decades of his rule over the emirate, he accompanied all modernization with the cautious effort to avoid exposing the self-understanding of the local population to all-too-great challenges. The new concept, by contrast, is oriented much more intensely toward interacting with the world.

Zaki Nusseibeh [5], under Sheik Zayed and today still the personal advisor of the ruler of Abu Dhabi, who is simultaneously President of the UAE, confirms this assessment. As Vice Chairman of the Abu Dhabi Culture and Heritage Authority (ADACH) and head or executive board member of several deliberative bodies, Nusseibeh is one of the protagonists of the emirate’s cultural development. For him, the point of the Cultural District on Saadiyat is not revving up tourism or polishing an image, but a much broader vision, a new educational, cultural, and civilizational approach. He says that Abu Dhabi, whose oil reserves will last more than another hundred years, has no need to think about financial profit from such cultural projects. "The project is part of Abu Dhabi’s plans for the cultural and educational development of its young people, and its goal is to build bridges to the world, balancing its traditions and heritage as an Islamic and Arab country with a truly global cultural outlook that embraces the world." The emirate is prepared to make quite substantial contributions to join in a universal world civilization in which it makes no difference whether someone comes from the East or the West, what cultural roots he has, or what religion he professes.

The planned cultural sites are not the only means Abu Dhabi wants to use to bring together people and institutions that want to collaborate on realizing such a vision. In parallel, there is also an educational offensive in every imaginable area: the humanities, the natural sciences, medical research, new technologies, etc. The aim is for specialists from all over the world – and in particular those of Arab descent – to be drawn to Abu Dhabi and to make a new home there. Sorbonne University in Paris has already founded a campus in Abu Dhabi, and Nusseibeh is on its administrative board. Yale University in the United States plans to open an Art Institute in the city in September 2008, and New York University wants to begin instruction at a Middle Eastern Campus in 2010.

Zaki Nusseibeh says, "Art is openness to the world," which means that fostering the arts does something against the concept of a clash of cultures and against various strands of fundamentalism. He adds that a worldview can be better reformed through culture than through politics. The cultural highlights imported to Abu Dhabi from outside, which will also offer educational programs, are needed to set standards and to provide impetus to other institutions and experts. But Nusseibeh notes that it is extremely important to avoid simply steamrollering local traditions; they should be integrated and strengthened instead.

This is also underscored by Omar Ghobash [6]. He is a co-owner of Third Line Gallery [7] in Dubai, currently probably the most interesting commercial gallery for contemporary art in the United Arab Emirates. Ghobash is presently working in Abu Dhabi as Deputy CEO of the Emirates Foundation, which was founded in 2005. He says that the foundation’s strategy focuses on individuals, "to understand things from the ground up and working back from that to develop policies", that is, listening to people and finding out what moves them. In comparison with the globally oriented major projects, the Emirates Foundation works on a more "human scale". Since 2007, it has granted stipends to cultural workers of all disciplines who live in the UAE. "I personally feel much more comfortable on a human scale, because from our perspective, that's from where the problems are going to be solved."

Ghobash feels that the meaning and purpose of the Saadiyat Cultural District and its effects on Abu Dhabi and the entire country have not yet been adequately conveyed to the local residents. Possible dangers and opportunities have not been publicly considered and discussed enough. But he hopes this will happen; after all, there is still plenty of time before the new cultural institutions are opened.

Even among the artists who live in the Emirates, who ought to take a vital interest in the cultural projects in Abu Dhabi, a certain skepticism seems widespread. According to Ebtisam AbdulAziz, many find it hard to imagine that, without corresponding traditions, Abu Dhabi could be developed to surpass Sharjah as the country’s new cultural metropolis. Most people working in cultural areas are surely much more closely connected to Sharjah, due to the Emirates Fine Arts Society located there, its Art Museum, the Sharjah Biennial, and other exhibitions, events, and cultural institutions.

Local artists are aware, of course, of the astronomical sums being spent on the museums on the island of Saadiyat. And they have also heard of the intentions to build up independent art collections that also include the country’s own contemporary art – which ought to be a matter of course. But so far, the country’s institutions do not seem to have made any efforts to secure important works by purchasing them. They are being pre-empted from elsewhere, as Mohammed Kazem reports: "We have noticed lately that museums, galleries, institutions, and individuals from outside the country have purchased many of the works of local artists, from both the first generation of pioneers and the new generation. The process of reacquiring these works would be difficult, of course, and we therefore hope that our local institutes become more aware of the importance of these works."

Despite all their misgivings and their disappointment at not being more greatly involved, the artists seem to fundamentally approve of the cultural plans for Abu Dhabi. A few days before our talk with Zaki Nusseibeh, we astonishingly heard similar opinions from Hassan Sharif in Dubai. An artist, theoretician, and leading figure in a scene in the Emirates interested in experimental art, he sees a deep cleft between East and West that has substantially expanded in recent years. He says the rulers and institutions in the UAE should be aware of this and should work to build a new civilization that is sorely needed and that could grow here. Such a civilization would be of use to both East and West and could bridge the distance between the two sides. This would indeed be forward-oriented thinking. But if one wants to use contemporary art for this, one must give the artists more freedom and not only tolerate current art practices, but also value and foster them. This necessarily depends on further developing and modifying a still strongly traditionally anchored understanding of art.

Ebtisam AbdulAziz warns that the new museums must not become storage depots for something that no one really wants. In a certain way, a country is reflected in an art museum; such a museum conveys something of the country’s history, development, and inhabitants, and for this reason it should be open for the widest possible range of artistic approaches in the Emirates. One can only hope that she is not disappointed in this and that the policy of the Guggenheim in Abu Dhabi is more open than in Bilbao. There it took 10 years before local artists were recognized with exhibitions.

It is astonishing how few concrete details of the Cultural District on the island of Saadiyat are known even to emirate circles interested in art. This could soon change. As recently became known, the Tourism Development & Investment Company is delegating further planning and realization of the cultural projects, which surely also includes publicity, to a Cultural Council. A Deputy Director was not hired until October 2007: Charles Merewether, an internationally renowned curator and art historian who was also artistic director of the Sydney Biennial 2006 [8]. First he will have to build up the infrastructure of the Cultural Council and recruit and train a staff. And of course there is a wealth of conceptual details to clear up, among them such tricky ones as what works of art a society molded by Islam will endure in the Louvre of Abu Dhabi, and how to answer this question without provoking accusations of censorship. Exhibitions and events should make the profile and program of the museums recognizable before they open. As Merewether emphasizes, alongside all the visions of the future, it is high time to face up to reality and its complex implications.

Cultural District on Saadiyat Island ►
Facts, information and photos of all the projects