The gallery in Dubai is one of the most dedicated platforms for current art in the Gulf region. 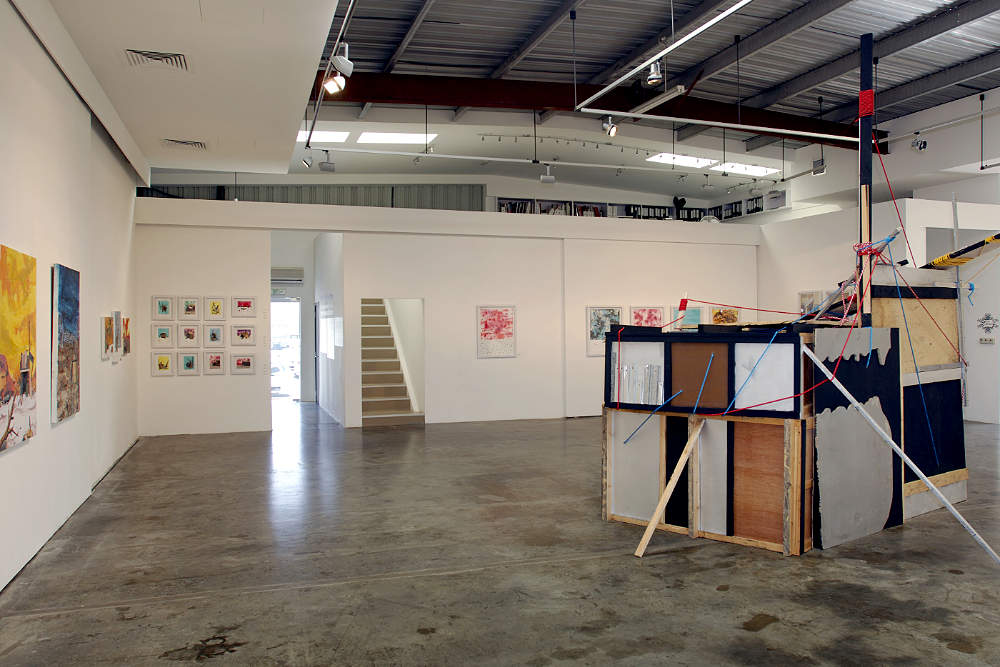 Reports on Dubai are composed in superlatives, dovetailing with official marketing strategies. Considering the stories about immeasurable wealth, it is hardly surprising that outsiders believe the city must be a gold mine for the art market. This illusion attracts dealers and artists from all over the world and is a substantial reason for the strong interest in the Art Dubai art fair, which will soon be held for the second time. The prospects may be promising indeed, but the galleries located in Dubai know all too well that no one there is eagerly throwing money at art, especially not at contemporary art.

The operators of The Third Line, one of the most dedicated platforms for current art in the Gulf region, are some of the best experts on the scene. The Third Line is located in a former warehouse in the dusty industrial area, Al Quoz. The contrast to the glittering world of shopping malls and luxury hotels that dominates Dubai’s image in the media could not be greater. But that can change fast in Dubai. It seems that the business owners who have set up shop in Al Quoz are not the only ones who expect the quarter to soon turn into something like the Soho or Chelsea of Dubai. In this ambience, The Third Line, with its concept of fostering talented young Gulf-region artists and of bringing home recognized artists from the Middle East, has become a special site of attraction. Contributing to this, along with high-level exhibitions, is also the program of events, which includes films by Arab directors, book presentations, talks with artists, seminars, and much more.

A three-person team founded The Third Line at the beginning of 2005. Sunny Rahbar and Claudia Cellini are the directors of the gallery in Dubai. The third partner, Omar Gobash, was born in the emirate Ras Al Khaimah, studied Mathematics in Britain, worked in the diplomatic service and in business for several years, and is currently Deputy CEO of the Emirates Foundation in Abu Dhabi [1]. In an interview in Dubai, Sunny Rahbar and Claudia Cellini spoke about the birth, goals, and work of The Third Line.

Sunny Rahbar grew up in her Iranian family in Dubai and, after studying Art in the United States, gathered her first experiences in curating. After she returned to Dubai in 2001, she and likeminded companions organized fashion, music, and art events. Then she regularly did work for exhibitions, for which she rented rooms or borrowed them from friends. "The feedback was very good, and though people initially showed only interest and curiosity, at some point they began buying and even collecting art." Just as Sunny Rahbar was thinking of opening her own art space, she happened to meet Claudia Cellini. She comes from the United States, has lived in Asia for a long time, operated an art consulting agency from Singapore, and initiated there a nonprofit program for art education. Claudia Cellini began commuting between Singapore and Dubai, because she sees ideal conditions for the art market in the United Arab Emirates. "Money, plenty of intelligent and well-educated people, young people from all over the world, especially from the Middle East, the necessity to develop creative industries ..." In two weeks, the two high-power women had worked out a business plan.

Since the project is conceived as a broader platform, they chose to avoid the term "gallery". The decision was made for "The Third Line", a formulation taken from a poem by the Iranian Sufi mystic, Shams-e Tabrizi (+1247), the master and friend of the famous poet Rumi (1207 - 1273), because it can be understood as a metaphor for what lies between and for the unknown that remains to be discovered, which can be applied to art. At the same time, it stands for the three partners of the enterprise. Initially there was some consideration whether The Third Line could be a non-commercial art space. But the prospects for funding from the Emirates and international foundations were too slim and the bureaucratic hurdles too high; only a commercial structure seemed to offer a chance of survival.

And in fact The Third Line survives primarily on sales. Who buys the art? "Our primary purchaser segment consists of younger Arabs from various countries who live in Dubai," says Sunny Rahbar. And then come Europeans and Americans who are in Dubai on business or as tourists. "But our work focuses particularly on the people who live in the region or have roots here." Some native collectors of contemporary art are already among their customers, but because there are not yet very many of these, it is important to devote plenty of time to mediating the art presented in The Third Line. Only occasionally can sponsors be found for individual exhibitions, like banks or companies that want to make an appearance in connection with art. Sunny Rahbar says it is always a tightrope walk to realize projects that are new, interesting, and perhaps even daring and that therefore are unlikely to call forth buyers, while also offering art that is easier to sell, as a means of securing their own existence. "We want to step over boundaries and show works that have never been seen here before. We continue presenting art that is hard to sell, for example installations, and we are the first gallery in the city that shows video works. But sometimes we are pleasantly surprised, because we sell works that we never thought could be sold. The market changes very fast, and our clientele’s preferences and interests cover a broad spectrum." Even with internationally established artists who are, however, poorly known in Dubai and who exhibit in The Third Line, it is never possible to know how the people here will respond, because they understand the works from a different perspective. For example, what may seem "exotic" somewhere else can sometimes seem anything but alien in the local context, because it developed here.

The question arises whether The Third Line has ever bumped up against the limits of a community that is, after all, shaped by Islam. "We are often asked that," answers Claudia Cellini. "It has never happened yet, although we have shown pretty much whatever we wanted to. It is definitely possible to bring many things to discussion here without having problems." Even works with sometimes touchy political or social implications are possible. Only nudity is problematical; it can really cause difficulties.

Is it really true that so many new galleries are opening in Dubai? Claudia Cellini confirms this. "We hope that more will also come to our area, because that makes the scene bigger and fosters synergy effects." But don’t many have the expectation of making a fast buck here? "For some, that’s definitely true, also for many artists who contact us – and about three contact us every day. The illusion is widespread that in Dubai whatever one hangs on the wall is easily sold. But that’s not true at all. We have to work very hard for every sale."

What are The Third Line’s next plans? Claudia Cellini says, "Even if we think we ought to do more for our artists in the international context, ultimately we are convinced that our most important focus has to be here, our own scene, our own audience, and our own development." Sunny Rahbar adds, "The basis here has to be strengthened. We are planning a few publications, books about artists, because that will enable us to reach more people and because the stores here have no books about Arab artists." She quotes the third partner, Omar Gobash, who said, "I grew up with books by Western authors, but I want my children to read Arab authors and look at Arab art."