Sharjah, cultural capital of the UAE. Hisham Al Madhloum about the institution, headed by himself. 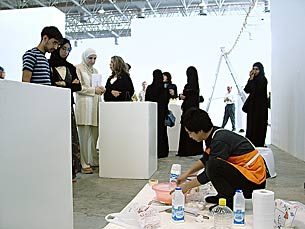 Sharjah is the third largest of the seven United Arab Emirates [1]. While political life is centered in the capital Abu Dhabi and the glamorous Dubai serves as the center for commerce, Sharjah is considered to be the cultural capital of the federation. An international art biennale has been held there since 1993. We gave a full report of it in the sixth edition of Universes in Universe (April/Mai 2003, see our report). In 1998, Sharjah was the UNESCO Cultural Capital of the Arab World.

During our second visit to Sharjah in April 2004, we met the head of the Directorate of Art, Hisham Al Madhloum. From the art museum where we had arranged to meet, we went to a nearby square surrounded by galleries and artists’ studios in the "Art Area", a complex of buildings in the traditional style, bounded on one side by modern high-rises and on the other side by the Corniche, the coastal road. In a long interview, Hisham Al Madhloum explained to us the work of the Emirate’s art administration as well as the profiles and activities of many subordinate institutions.

First and foremost, he emphasized that Sharjah holds its place as the cultural capital of the United Arab Emirates and as one of the most important cultural centers in the Arab world as a result of the personal commitment of the monarch, H.H. Sheikh Dr. Sultan bin Mohammed Al Qasimi, who holds a doctorate in history and geography. Since the 1990s he has been pursuing an extensive policy of developing culture and education. This includes the establishment of a number of universities, the restoration and reconstruction of old buildings and districts, founding of museums and other cultural institutions, the organization of regular exhibitions and events, and awarding of prizes, as for instance the "Sharjah Prize for Arab Culture" [2] presented by UNESCO since 1998.

Hisham Al Madhloum explained the structure of the cultural administration to us. In accordance with the federal structure of the country, Abu Dhabi is the seat of a central Ministry for Information and Culture and each Emirate then has an analogous institution dependant on the local government. In Sharjah this is the Department for Culture and Information, which again is divided into seven directorates; amongst them, departments for archeology, heritage, libraries, and the one for the arts – in reference to the fine arts – headed by Hisham Al Madhloum himself.

In Sharjah, a consequent reference to cultural roots is being made. In the city center, a number of areas are being reconstructed in the old architectural style, including remnants of original building substance. The largest of these is the "Heritage Area", another is the "Art Area". The latter was developed between 1993 and 1997 in the Al Shuwaihiyeen district and houses institutions of fine arts (see the list with details of the individual institutions).

The art district is dominated by the Sharjah Art Museum, a compact structure with battlements and elegant wind towers, which here provide a traditional decorative element without the actual cooling function. After the museum opened in 1995, it was expanded over the next two years so that it now has 111,000 m2 of useable space. Every two years, it serves as the primary venue for the International Biennale of Contemporary Art.

Everybody that we talked to during our trip to the three countries on the Persian Gulf (see Editorial) agreed that the last edition was a particular highlight in the history of the Sharjah Biennale. The organizers were very successful in attaining their objective of placing the new art forms from the Gulf region and Arab world in the context of the global art scene. Find out for yourself by taking our Tour which includes many pictures! We show works by 71 of the 117 participants. The 6th Sharjah Biennale was conceived and headed by Hoor Al Qasimi, the daughter of the monarch of Sharjah, together with the English curator Peter Lewis. Hisham Al Madhloum confirmed to us that the 7th edition of the Biennale in April 2005 would follow in the line taken by the last one.

In May 2004, an International Sharjah Biennale for Arab Calligraphy was held for the first time. In future, it is intended to hold this in alternate years to the Biennale of Contemporary Art. The venue is the Sharjah Museum for the Art of the Arabic Calligraphy and Ornamentations on Arabic Calligraphy Square, opened in 2002. In a section for classical, one for contemporary, and one for experimental calligraphy, where this art form appears for example in connection with videos, installations and ceramics, 490 works of art from 27 artists were on display.

In our interview, Hisham Al Madhloum placed considerable emphasis on the value of international art and cultural exchanges, which the Emirate organizes beyond these regular events. As examples of this, he mentioned long years of cooperation with partners from Denmark, Great Britain, Germany, and the Netherlands, as well as the exchanges with Spain that began in 2003. Al Madhloum said that with the arts, people from various parts of the world could communicate with one another and learn something about the identity of the other. For that reason, along with the exchange of exhibitions and the cooperation with collections and institutions, personal encounters are of particular importance.

Dept. of Culture and Information