Photo Tour through the exhibition of the Emirati artist in Sharjah, 22 Febr. - 22 May 2014, curator: Hoor Al Qasimi. Visit to his studio in Khorfakkan. 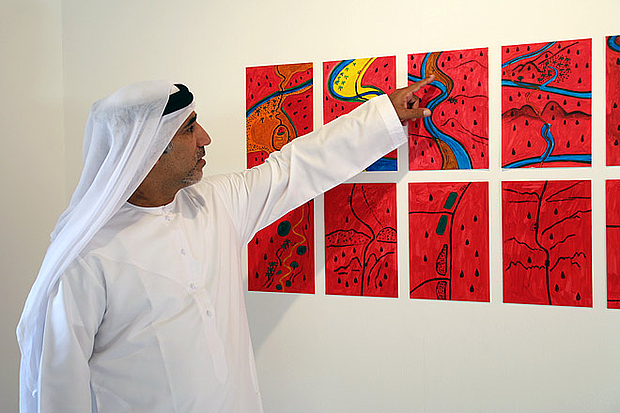 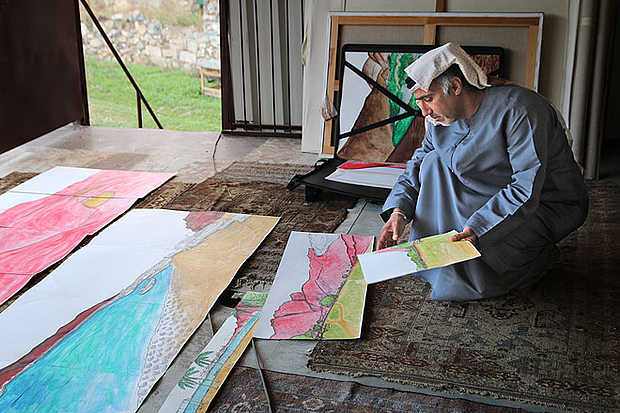 Photos from a studio visit ►
Visit to Abdullah Al Saadi's studio near Khorfakkan on the East Coast of Sharjah in January 2014.

Abdullah Al Saadi: Al-Toubay focuses on a selection of works from Abdullah Al Saadi’s long history as an artist, and his love and fascination for nature is evident through his artistic practise.

Some of these projects, which he has just completed were works in progress, and companionship is at the very centre of his long journey and has contributed to this exhibition in many ways. From his donkey in Camar Cande’s Journey (2010-2011), to the animals in The Comparative Journey (2013), to his mother in My Mother’s Letters (1998-2013) and son in The Watermelon Series (2013) each of these companions has had a profound influence on these projects.

His more fantastical works, like The Comparative Journey (2013) explore how the need for companionship can even lead to relationships with inanimate objects, such as stones, which represent the various animals that later became companions on yet another journey.

The hardships of these travels reflected in the Stone Slippers (2013) and the diaristic accounts and drawings reflect the life of a gypsy or nomad continuously travelling and searching for something.

Abdullah Al Saadi has previously exhibited his work at the Sharjah Biennials in 2003, 2007 and 2011.

Abdullah Al Saadi is a 1993 graduate of the United Arab Emirates University, Al Ain, and holds a BA degree in English Literature. From 1994 to 1996 he studied Japanese painting at Kyoto Seika University in Japan.

Al Saadi’s work ranges from painting, drawing, the creation of lengthy artist’s notebooks, to the collection and systemic categorisation of found objects, and the invention of new alphabets. A great affinity with nature and rural life informs his practice, which explores the changing environment as well as personal and cultural history. 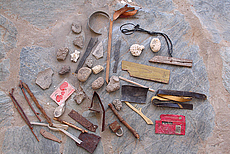 His work in relation to the landscape near Khorfakkan, UAE, and its cultural and personal context.