Languages of the Desert

Artists from the Gulf area at the Kunstmuseum Bonn. Critical notes on the curatorial approach. 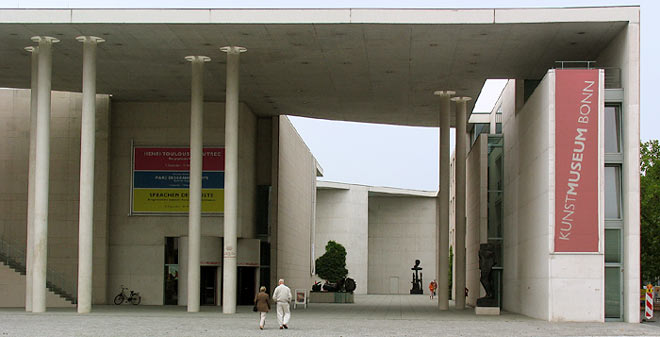 Of course it is commendable that the Kunstmuseum Bonn (Museum of Art Bonn) is working to draw more international attention to contemporary art from some countries on the Persian Gulf and from Oman. And even though the selection is not persuasive in all cases, it is pleasing to be able to see works by 20 artists from the region in a major German museum. The project was made possible by large financial contributions from the Gulf states. The framework conditions are thus quite good, and yet one has the feeling that this exhibition cannot substantially contribute to a deeper understanding of the art on display. This is due primarily to obvious problems of mediation, but also to the conceptual approach.

The two curators, Karin Adrian von Roques and Dieter Ronte (who is also the Director of the Kunstmuseum Bonn), have made ambitious claims and enjoy noting the scope of their task and the pioneering nature of their achievement. They want, among other things, to "provide a highly differentiated glimpse of the Arab art scene" and they note, "it is of great importance that the European and Western ignorance with regard to foreign cultures is finally opposed with another platform" (press release, flyer). But they themselves act from a standpoint of cultural superiority, as will become clear in the following. By categorizing the art so explicitly as something alien and different and by contrasting it with "Western" art processes, they create more distance than they overcome. Instead of demolishing clichés, the two curators cling to the stereotypical idea of the Gulf states as an immeasurably wealthy "world that was catapulted into modernity" (by whom, actually?) and extend the hype about the boomtown Dubai to the whole region, without showing in detail what is relevant in all this for the artists’ work.

This already starts with the public image. Whoever sees the poster, the catalogue cover, and the flyer will initially assume they are for an architecture exhibition. Depicted is the design for "Business Bay", a gigantic shopping center with office and residential towers on an extension of Dubai’s creek. Nothing of this is to be seen in the exhibition, nor is any connection with the works of art to be discovered. Why a marine city in a landscape garden, of all things, appears as an advertising motif for an exhibition titled "Languages of the Desert" is one of the organizers’ inscrutable decisions. But the title, too, is hardly suited to prepare the audience for a differentiated reception of the works of art. It was simply adopted from Yusef Ahmed, who gave this title to a series of his paintings. But presenting the diverse themes, motifs, and working methods represented in the exhibition as "languages of the desert" is completely misleading.

In the accompanying texts, the impression is repeatedly conveyed that until relatively recently there was nothing but desert in the Persian Gulf region. But the families of most of the artists come from coastal cities and fertile territory that is not at all as lacking in history as Ronte suggests, for example with this sentence in the flyer and catalogue foreword: "The artists of the Gulf states testify to the fact that they must be taken seriously as individuals, not just as craftspeople, within a future-oriented society that does not have to work off a long past, but which has in a few decades taken giant steps from the desert to the towns." Can Ronte failed to have noticed during his visits that there are witnesses to millennium-old cultures in the countries of the Persian Gulf and that sharpening awarefness of their own cultural traditions and historical references is regarded as having great identity-producing significance, precisely because the societies there are developing so rapidly?

At the press conference in Bonn, the curators didn’t exactly show that they really take seriously "as individuals" the artists who were present. Although a specially hired interpreter for Arabic sat on the podium, even questions in German that were explicitly addressed to the artists were not translated, but immediately answered by Ms. von Roques, in German, so that the guests were downright excluded. But if one reads this curator’s announcements, one notes that she would much rather stage herself than focus attention on the artists and works for whom and for which she says she wants to create more understanding. It is astonishing how little one learns, in a catalogue of more than 190 pages, about the artistic work of the individual participants in the exhibition.

Although they underscore that the exhibition shows "many foreign languages", Ms. von Roques and Mr. Ronte have not tried to provide visitors help in accessing them. On opening day, at any rate, no elucidations of any kind could be discovered. In particular, the works by artists who could not be in Bonn when the exhibition was being set up are presented in a way that hardly reveals their sense and that even alters it.

An especially clear example is the installation "Vision and Illusion" by Ebtisam AbdulAziz. As the artist explained in a contribution to this online magazine in July 2005 [1], the visitor is "to walk in the dark through a narrow and almost mysterious corridor", reaching the projection at the end only "after the visitor makes a certain physical effort". Through a side window, one then sees light boxes for eyesight tests and hears the letters of the alphabet read aloud continuously and monotonously. Ebtisam AbdulAziz remarks that she wanted "to imitate the dictatorial manipulation that certain rulers exercise upon their subjects". Although the curators in Bonn had seen the work at the 7th Sharjah Biennial (April-June 2005) and an artist present in Bonn had tried to ensure that his colleague’s concept prevailed, the path to the projection is ultimately anything but physically effortful; it is, namely, short and illuminated by a lamp. This robs the installation of its intention.

Probably no one in Bonn could understand the point of "Letters of My Mother" (1998 - 2000) by Abdullah Al Saadi. Mounted on the wall are only the uncommented pages of a book full of sketches combined with numerals. But these can be deciphered only when one learns that this is the analysis of the codes for objects that his mother left him as messages when she didn’t find him at home. Normally Al Saadi exhibits these pages together with these objects [2]. There is no indication of this at all in Bonn, and even in the catalogue there is no photo of it.

The video artists who had made the trip were quite visibly disappointed to see that their works, conceived for large wall projections, were shown in Bonn only on small monitors that do not do justice to them. An originally planned interactive computer work by Anas Al Shaikh had to be dismantled because, on the day before the opening, he withdrew his participation because of a dispute with Ms. von Roques about the principles of the exhibition and its public relations work.

Exactly in the middle of the largest exhibition room lies a clearly demarcated pile of paper tied together in rolls. Hassan Sharif could not be present in Bonn, but he, for whom the meditative process of production is more important than the result, would probably have placed them incidentally somewhere in the corner and would not object if the audience changed them [3]. Nowhere, not even in the catalogue, does one learn that Hassan Sharif studied art in London for five years (until 1984) and then became the most important concept artist in the Emirates and, as theoretician and promoter, also the leading figure of a scene searching for new paths in art and life. By the way, an exhibition at the Ludwig Forum in Aachen, just 90 km away from Bonn, already credited him with this in 2002. The exhibition presented four of the artists now shown in Bonn [4]. Although Ms. von Roques and Mr. Ronte ought to know this, their exhibition lacks any indication of the earlier showing or of other meritorious efforts in recent years to acquaint the European public with art from Arab countries.

Since the two curators explicitly declare "Languages of the Desert" a continuation of an exhibition series initiated by Ronte in the mid-1990s, "Peripheral Situations", one must assume that they have noticed little of or at least drawn no conclusions from the postcolonial debate of the past decade and from the deconstruction of the "center/periphery" paradigm. Testifying to their apparently undisturbed self-understanding as representatives of a cultural center is, among other things, the statement that the artists from the Gulf region are finally being shown "on an equal level" with "world-renowned Western artists" (press release), by which they mean physical proximity to the permanent exhibition. Aside from the paternalism behind this, they should know that works by eight of the artists now shown in the Kunstmuseum Bonn were already exhibited at the 6th Sharjah Biennial in the company of works by such stars of the Western art scene as Christo & Jeanne-Claude, Candida Höfer, and Rosemarie Trockel. The list of participants in the exhibition and in the symposium of the 7th edition (April-June 2005) shows that the Sharjah Biennial is not at all merely "well on the way to achieving a worldwide reputation", as Ms. Frau von Roques writes, but has long since enjoyed it. [5]

Anas Al-Shaikh withdrew his participation shortly before the opening