Waves at the Periphery 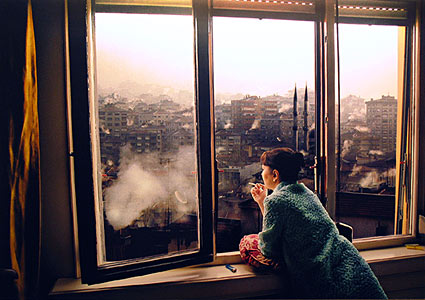 Sabine Vogel: René Block, in 1994, in your time as head of the art department of the Institute for Foreign Relations (ifa), you organized the first German exhibition of contemporary Turkish art. In the following year, you were the first foreign Artistic Director of the 4th Istanbul Art Biennial, which you gave the poetic title "Orient/ation”. What triggered your interest in Turkish art? What discoveries did you make? What did you think was new and fascinating about the Turkish art scene?

René Block: The trigger was coincidental. In 1991, I was invited to Istanbul to take part in a Beuys Symposium at Marmara University. That was my first contact with the Turkish art scene. The artist Sarkis, who was born in Paris, had provided me with the names of some artists, and in Istanbul I was brought together with some others. An intense first encounter resulted with a scene that was completely unknown to me and that was ignored by all the local culture sponsors. On my second visit a year later for the 3rd Istanbul Biennial – I had just assumed my office as Project Manager at the Institute for Foreign Relations (ifa) in Stuttgart – I encountered impressive works by Gülsün Karamustafa and Hale Tenger that never let go of me again. I decided to realize an exhibition in Istanbul with these and other Turkish artists, including Füsun Onur and Ayse Erkmen. It took place under the title ISKELE in the three ifa galleries in Stuttgart, Bonn, and Berlin. A year later, during the preparations for the 4th Istanbul Biennial of 1995, I intensified these first contacts with Turkish art that is primarily at home in Istanbul. Along with the artists already mentioned, participating here were Hüseyin Alptekin, Aydan Murteazoglu, and, as the youngest participant, Esra Ersen, with in situ works for the various exhibition sites and the biennial’s motto: re-orientation in a desolate Europe after the fall of the Berlin Wall and the continuing Bosnia War in the neighboring Balkans. And the artists definitely addressed these issues in their works.

S.V.: In 1990, as curator of the Sydney Biennial, you already worked to bring Western and Non-Western art together. In 1994, you also visited the first Johannesburg Biennial. What was the reason for your turn to art of the "periphery”, which was coming into fashion in the Western centers at the time?

R.B.: About 10 years before my involvement with Turkey, I "discovered” Australia –this, too, an independent art scene hardly known in Western Europe, but fostered and taking off because of the Sydney Biennial. But the preconditions were different here, because Australia is part of the Western world, even if it is very distant from its centers. So with the "readymade”, I could clearly give the Biennial a Western cultural theme. With the bitter consequence that, in 1990, I could not yet involve any Aboriginal artists, which would be possible today, however, and which in 2006 I was able to make up, so to speak, at the Belgrade October Salon. I have always been fascinated by what happens at the periphery. Many people, not to say far too many people, are concerned with the artistic mainstream. That bores me. I’d rather use my energy for a side branch, accompanying it to the point where it, too, becomes a mainstream. And then I look for a new side stream.

S.V.: In your time as Director of the Museum Fridericianum in Kassel, you invited many artists, and especially women artists, from Turkey to give exhibitions. Is there an artistic dominance of women? If there is, what is it based on?

R.B.: It definitely existed. Because for many years of my artistic development, female artists were a sideline. It was no coincidence that, as an answer to the documenta 10, the first exhibition in Kassel in 1998 was devoted to nine women artists under the title "”Echolot - oder 9 Fragen an die Peripherie” (echo-sounder – or 9 questions posed to the periphery). And the last big project before I left in 2006 was also devoted to women artists. With five young women from Finland, the Northern European periphery became a center. But I think that such gender-specific dominances are also a temporary phenomena. It’s comparable to the oceans; we are dealing with waves. The youngest Turkish scene, in turn, is strongly dominated by male artists, but – and this is interesting – they don’t come from the center, Istanbul, but from the peripheral Kurdish city, Diyarbakir.

S.V.: With exhibitions like "In den Schluchten des Balkan" (in the canyons of the Balkans), you expanded the territory into new regions. In 2004, as Artistic Director in Cetinje, you organized the Montenegro Biennial "Love it or leave it”. Are the Balkans now the periphery to be newly discovered? Is that where the "fresh” force of powerful, strong forms of expression is meanwhile coming from?

R.B.: The "Schluchten des Balkan" were an answer to the documenta 11. The Kassel project was continued in Montenegro. The 4th Cetinje Biennial with satellite projects in Dubrovnik and Tirana was transnationally conceived. Its title "Love it or leave it" referred to a work by the Turkish artist Halil Altindere. It seems obvious that the artists of Southeastern Europe articulate themselves more intensely and directly politically than do the artists sworn to l'art pour l'art in the Western centers. With the October Salon Belgrade in 2006, I tried to bring the two scenes, that of the Balkans and that of the West, into dialog. The selection of works for "Art Life & Confusion" from about 100 participating artists was clearly tailored to the situation of the Serbian metropolis.

S.V.: Since Spring 2008, you have been operating the exhibition space for Turkish art "Tanas” in Berlin. Have you thereby come full circle with your work as a gallerist, curator, and museum director? Has the "Ready-Made-Boomerang", as your Sydney Biennale was called, come back to Berlin?

R.B.: You can say that again. In a certain way, TANAS closes the circle. I am returning to the site of my earlier work as a gallerist from 1964 to 1979 and as Project Manager at the Berlin Artists Program from 1982 to 1992. But with another set of tools than at that time. With TANAS, I continue, from Berlin, my commitment to contemporary Turkish art and can extend the Istanbul art space geographically, as well. The project is a component of a broad cultural-policy initiative of the Vehbi Koc Foundation that comprises an exhibition series in Istanbul, a series of monographs on contemporary Turkish artists, and the establishment of a collection of contemporary Turkish art. For Turkey, this is a unique breakthrough that could not have been imagined in 1994, fifteen years ago.

S.V.: "Tanas" is in the middle of Berlin, right next to the Museum for Contemporary Art at the Hamburger Bahnhof, and yet the loft in an industrial courtyard provides a view onto a fallow urban landscape. What does Berlin have in common with New York and Istanbul?

R.B.: Common to these cities is a respectively completely different dynamic, which can be explained by their very disparate cultural traditions. But these cities also have in common that they are alive – even if TANAS is located in an urban fallow spot; this is something you could also find in New York or Istanbul.

Established in March 2008 by René Block

The new space for contemporary art in Istanbul opened with an exhibition curated by René Block.