We need to talk about Halil Altındere! 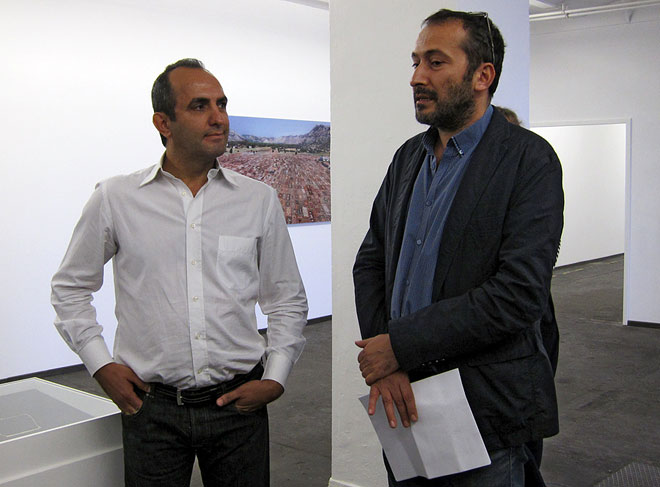 Infinity has no accent, a solo exhibition of Halil Altındere in the gallery Tanas, Berlin, opens a peculiar opportunity both to explore the recent swell in the Turkish contemporary art scene and also to witness the development of Altındere's art as a unique critical and humorous artistic language that goes beyond Turkey.

In the 1990s, Altındere was first internationally known for his direct critiques of the Turkish military apparatus and mainstream political narratives in Turkey. In time, he became a master of pastiche and parody. His artistic narratives are not really meant to be read as themselves, they are always hybrid forms made of fiction and plea. The exhibition Infinity has no accent shows recent sculptures, videos, and photo works by Altındere, and thus creates a promising platform for getting in touch with his forms of critique.

Altındere’s pastiches have open-ended forms, whereas his parodies mimic reality with a certain grinning, edgy face. We must also note that there is an assertive harshness in his parodies. And he loves all kinds of traps and ambushes. The Boxing Bag (2012) for example, is actually a punching bag hanging in the middle of the gallery. But don't ever dare to take it like that. And don't forget, there is no performance in the Altındere exhibition and nothing that demands participation. Especially, do not touch the punching bag, because it is cruelly made of marble and meant to hurt deeply if you punch it.

Altındere’s understanding of critical art practice is not about exposing the exploiter or the victimized; it is rather about dislocating the exploiter and dragging you to an ambush where you (sometimes together with the artist) will be victimized by those who are usually oppressed. And often with a subtle threat. The trans-series, Untitled (2004), Miss Understood (2010), and Nurse (2011), three extraordinary portraits of transgendered women, manages to do just that. These are parodies of familiar images for the indifferent middle class. An image of a nurse like you might see (and not really notice) on hospital walls, telling you to keep quiet; an image of a woman in the usual Miss-something uniform; and an ordinary Turkish person wearing a t-shirt that has the Turkish flag on. Yet, they are all trans women and the familiar settings are used to trap you. Nurse (2001) is not a passively beautiful, gorgeous nurse who is already totally silent; in fact, it is a trans woman who unsettles gender biases, and who is on the contrary actively, aggressively beautiful and ready to intervene. She is probably trying to silence you because it is she who is going to talk. Also, the title of Miss Understood (2010) is not just a joke; it shows that you really misunderstood and you don't know what will happen next.

Then comes much more blurred pastiches by Altındere. Three wax sculptures at the exhibition, Guard  (2012), Telephone Call From Istanbul (2012), and Mad Man (2012), do a remarkable job of creating an obscure story that dominates the whole art space. Monuments of weird scenes, unlikely moments are celebrated. Why is he investing in wax sculpture in the first place?

Altındere's first life-sized wax figure was Pala the Bard (2008), a semi-delirious impact on the reasoning of life-sized wax figures. Pala was a street fellow in Istanbul who wore weird bombastic costumes and who, in his fantasy-driven world, believed he was a symbol of the country: the wonderer no one respects yet everyone consumes without paying much attention. Altındere, in his way of spitting at the canon, re-shaped the art space as a temple seemingly for our veneration of Pala, someone we wouldn't think of for more than a second. It was contempt directed directly at the cult of Mustafa Kemal Atatürk in Turkey, because dedicated followers of Atatürk and many nationalists have been meaninglessly glorifying the wax sculpture of Atatürk exhibited at the Madam Tussaud’s. The ridiculous Turkish pride in seeing Atatürk's wax sculpture at the Madam Tussaud’s turned into an openly embarrassing phenomena when Pala the Bard became the second Turkish national who stepped into eternity through a wax sculpture. In this sense, Pala the Bard was one of Altındere’s undisguised, bitter parodies.

Nevertheless, the life-sized wax sculptures we see in this new exhibition in Berlin constitute a much more complicated pastiche. A midget guards the art space and is turned into a myth before becoming a reality. A telephone call from Istanbul locates the whole exhibition in Istanbul or in relationship with Istanbul: an eerie mocking of internationalist cosmopolitism. Also, the wax sculpture of a supposedly "mad man" goes into a rage apparently because of another pastiche-based work of Altındere, this one mimicking Mladen Stalinoviç’s early position by bubbling "An attack on my art is an attack on socialism and progress".

All in all, it is possible to call this an antisocial collection of works. They are neat, deliberately prepared and produced, high-quality and unconventional. They want to look beautiful while killing you; these smooth teeth of pastiche can't even bite me, you want to say.  But this is the moment Altındere needs most to trap you: a moment when you feel desperately safe and you feel like you understand all the jokes and parodies involved. This is when the boxing bag punches you!

Halil Altındere: Infinity has no accent