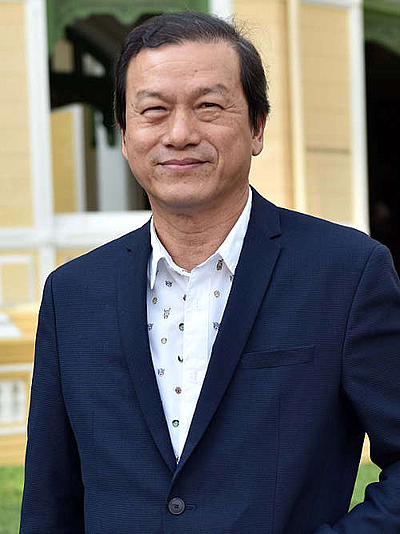 Professor Dr. Apinan Poshyananda was born in 1956. He received his Bachelor and Master Degree in Fine Arts from Edinburgh University, Scotland, and Doctor of Philosophy Degree in History of Art from Cornell University, USA. As an artist, he won three medals at the National Exhibition of Art, Thailand, and has held solo exhibitions at the Johnson Museum, Cornell University, Bhirasri Institute of Modern Art, and the National Gallery, Thailand. Between 1981-2002, Poshyananda taught at the Faculty of Fine and Applied Arts, and held position of Director at The Art Centre of Academic Resources, Chulalongkorn University, Thailand. He was awarded outstanding researcher from the National Research Council, Bangkok, and was a recipient of the Bellagio Fellowship from the Rockefeller Foundation. He served as the Director-General of the Office of Contemporary Art and Culture (2003-2009), Director-General of Cultural Promotion Department (2010-2011), and the Permanent Secretary, the Ministry of Culture, Thailand (2014-2016). During his time at the Ministry, Poshyananda was the commissioner of the Thai Pavilion at the 50th, 51st, 52nd Venice Biennale (2003, 2005 and 2008).

Poshyananda is the author to several seminal books on Thai and Asian art including Modern Art in Thailand in the Nineteenth and Twentieth Centuries (1992); Western-style Painting and Sculpture in the Royal Thai Court (1993); Behind Thai Smiles Selected Writings: 1991-2007 (2007); Playing with Slippery Lubricants Selected Writings: 1993-2004 (2010), among others.

He is a committee member of the Asian Art Council, the Solomon R. Guggenheim Museum, New York; Research committee of the National Gallery Singapore; and Advisor to the President and CEO of Thai Beverage Plc. He was conferred Knight Grand Cordon (Special Class) of the Most Exalted Order of the White Elephant, Thailand; Knight First Class of Royal Order of the Polar Star, Sweden; Knight, Order of the Star of Italian Solidarity, Italy and Officer of the French Arts and Letters Order, France.