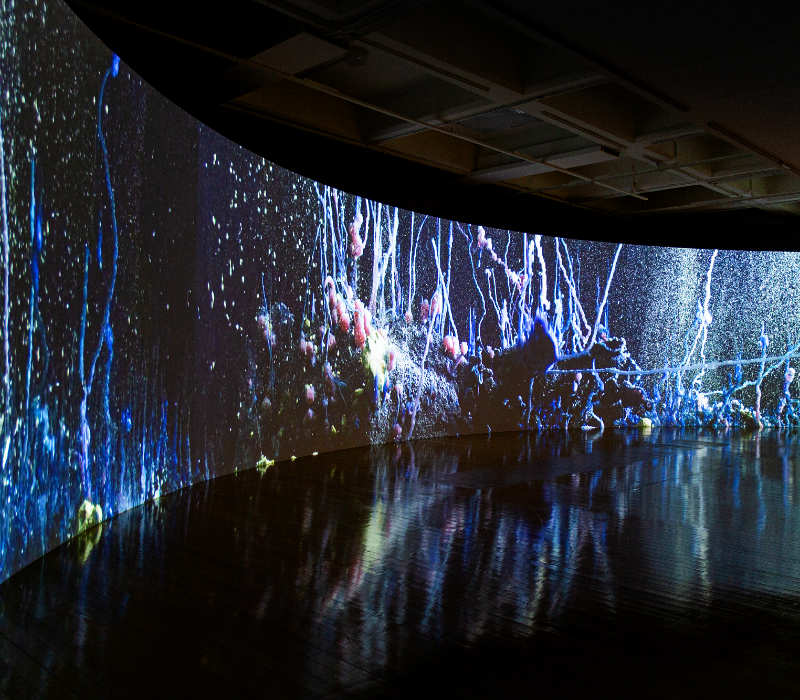 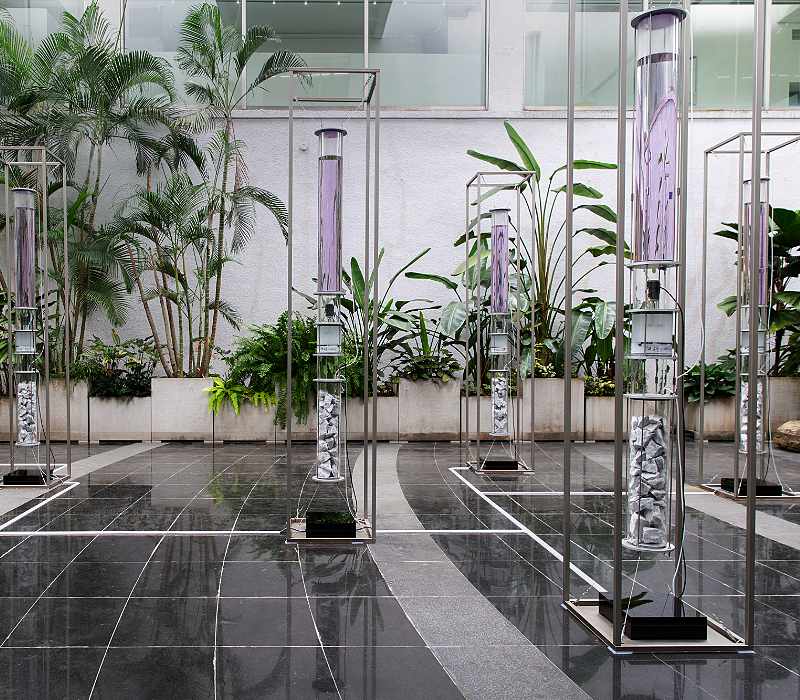 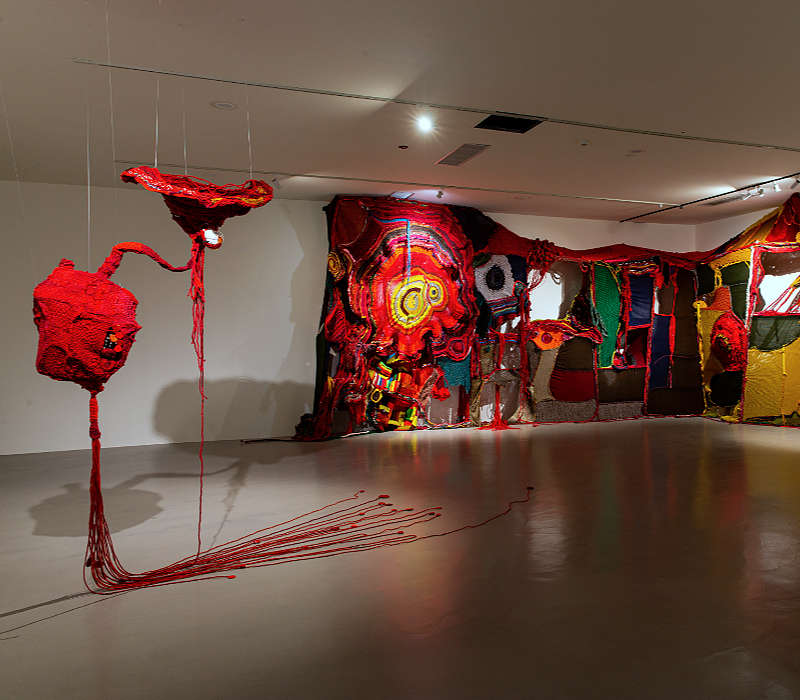 You and I don’t live on the same planet 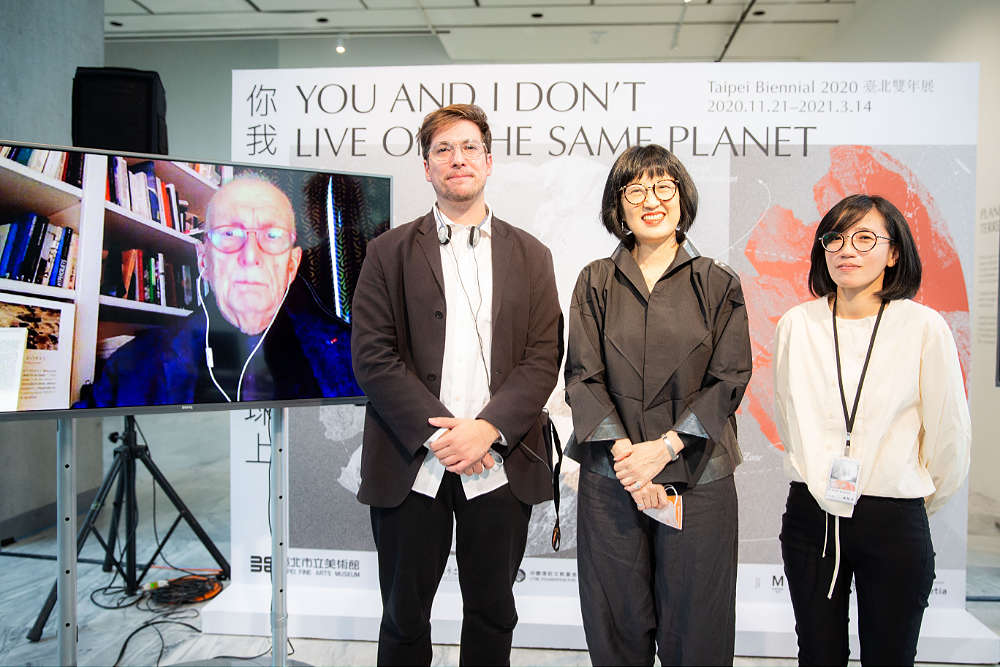 Co-curated by French philosopher Bruno Latour and French independent curator Martin Guinard, along with Taiwanese independent curator Eva Lin, who has been specially invited to curate the public programs, this year’s biennial showcases a line-up of works by 57 participants/groups from 27 countries and territories worldwide.

Entitled You and I Don’t Live on the Same Planet, the biennial questions our current ongoing geopolitical tensions and worsening ecological crisis by examining our differences and influences on a planetary perspective. As Latour and Guinard commented: “There is increasing disagreement on how to keep the world inhabitable, not only because political opinions diverge, but more crucially because we don’t seem to agree on what the earth is made of. Some today may even think the world is flat! It is as if there were several versions of Earth, with properties and capacities that are so different that they are like distinctive planets, which results in deviation in the way one feels, behaves, and predicts their future.”

The biennial proposes a fictional “planetarium” within the museum, wherein the invited artists, activists and scientists explore the tensions between the gravitational pull of different “planets.” Each planet embodies a divergent version of the world, not only in terms of representation, but also in terms of materiality. The planetarium includes: a planet for those who relentlessly modernize despite planetary boundaries (planet GLOBALIZATION); a planet for those who feel betrayed by globalization and want to consequently build walls for seclusion (planet SECURITY); a planet for the few privileged who want to settle on Mars to avoid the doomsday (planet ESCAPE); a planet for those who cannot afford such a costly trip but instead seek refuge in an environment imbued with metaphysical beliefs (planet with ALTERNATIVE GRAVITY); and finally one for those who are concerned about the climate situation and trying to reconcile the balance between maintaining prosperity while keeping within the planetary boundaries (planet TERRESTRIAL). 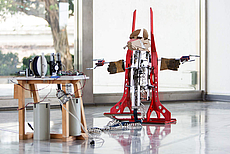 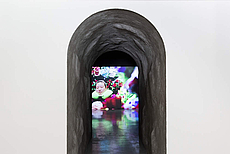 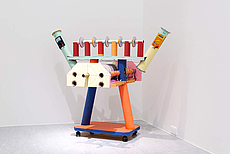 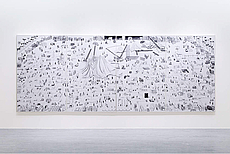 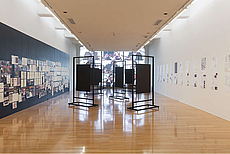 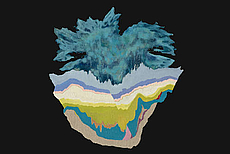 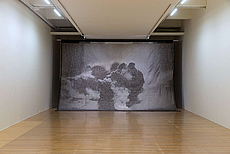 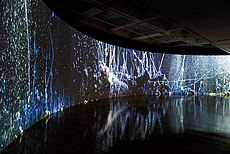 Indigenous Mexican artist Fernando PALMA’s robotic chimera creatures will serve as the prelude and move in several directions in the entrance hall, which prompts us to confront these ambiguous Nahua figures that are composed of electrical and construction materials, with electricity as the vital force that allows the work to flow. The work embodies a traditional Nahua perspective that believes humans can establish a mutually beneficial symbiotic relationship with the surrounding environment when we realize that everything has a “persona.”

Planet GLOBALIZATION is shaped by the dreams of modernization, which has kept attracting people regardless of climate change and increasing inequalities. French artist Franck LEIBOVICI and legal analyst Julien SEROUSSI tackle issues around international justice with muzungu. Basing their research on a case arbitrated by the International Criminal Court in The Hague, they have developed experimental methodologies for court practitioners in an installation of archival display. Docents are especially recruited for the project to be on-site mediators, helping visitors to rearrange the evidentiary materials, making new narratives emerge from the images, and thus generating new discourses on the case from their viewpoints.

Planet GLOBALIZATION seems to have little traction for those who feel betrayed by the current economic system and who need to hide behind the walls of their nation state to protect themselves in planet SECURITY. This planet emerged because of figures like Donald Trump’s former chief strategist, Steve Bannon, who manipulated some people’s fears in numerous documentary films and imposed a deep division on those who want to build a common world. Jonas STAAL presents a retrospective of Bannon’s work by methodically dissecting the mechanisms of the ultra-right propaganda in the US. In Taiwan, the notion of “security” is also a hot topic under constant review and discussion, which the artist CHIN Cheng-Te and his collaborators’ work explore. Inspired by the military and historical background of Shilin and Beitou in Taiwan, they present Making Friends/ Fire. The work is composed of various installations and artifacts, based on the bunkers and defense apparatus built in Taiwan during the cold war period, implying how the regime carried out surveillance to maintain the integrity of its governance.

Planet ESCAPE explores the urge of a small number of privileged people who want to leave Earth and colonize Mars or build a bunker deep in the ground that will not be affected by climate change. With her work Corrupted Air–Act VI, Dutch artist Femke HERREGRAVEN invites us into a survivalist bunker, an imaginary “panic room” in case of catastrophe. Tracing statistics regarding catastrophe bonds, human death rates, and ecological extinction, the artist has produced data visualizations, landscape reliefs, sound, and visual images, offering a prophecy of the future of the “Last Man.” 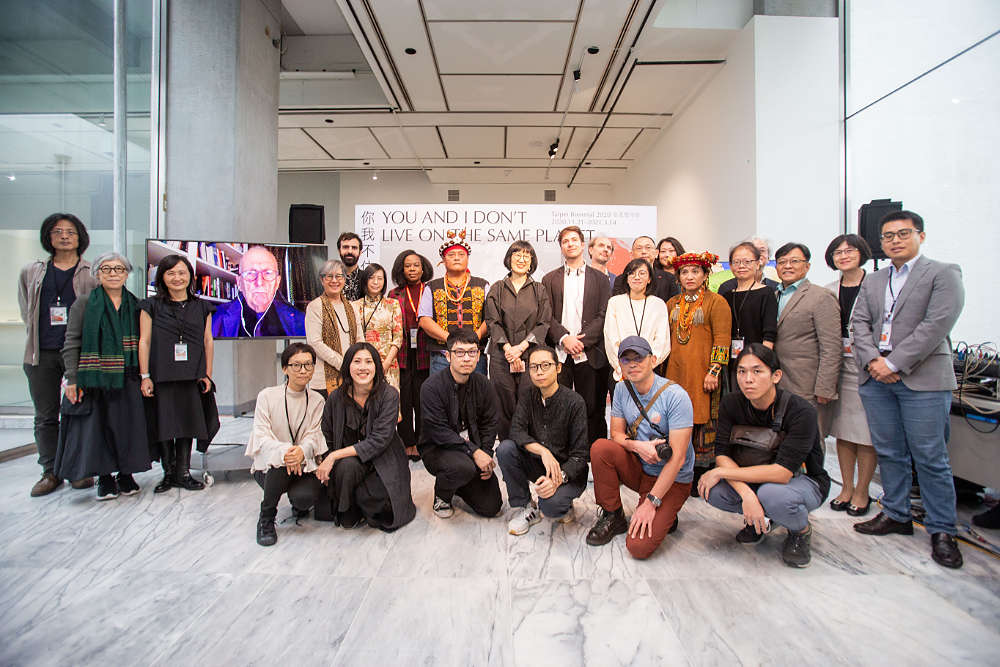 Planet TERRESTRIAL restlessly looks for ways to achieve prosperity while staying within the limits of planetary boundaries. Yung-Ta CHANG transformed his residency experience at Taroko Gorge in central Taiwan, where geographic dynamics such as earthquake, landslide, erosion, and weathering are particularly active, into an installation exploring the Critical Zone, the thin film at the surface of the Earth where rock, air, fauna and flora interact to create the conditions of life. Part of the installation is inspired from a set of scientific instruments which replicate a set of erosion mechanisms, creating a “micro-landscape” factory. Arts of Coming Down to Earth, presented by Stéphane VERLET-BOTTÉRO with Margaret SHIU and Ming-Jiun TSAI, will methodically map the ecological causality of Taipei Biennial 2020, and seek to understand the exhibition’s material existence in terms of CO2 emissions. The exercise unfolds in a collective understanding of cultural institutions’ necessary transformation towards multispecies conviviality and radical sustainability. In collaboration with Geotechnical Engineering Office of Taipei City Government, TFAM has committed over the next years to regenerating a large area of land in Taipei, focused on biodiverse protection.

The School of Mutants, by Hamedine KANE, Stéphane VERLET-BOTTÉRO, and Nathalie MUCHAMAD with Olivia ANANI and Lou MO, engages in an ongoing investigation into representations of the future of the African continent, with a focus on post-independence architecture in Africa and political utopias in Senegal. Inspired by an unfinished transnational cooperation project between Taiwan and West Africa in the 1990s, the installation includes archive materials, a 3-channel video, and a sound piece composed of found media and fragments of political discourse in Taiwanese and Senegalese dialects.

Planet with ALTERNATIVE GRAVITY suggests the strange form of geopolitics to which we should be attuned to feel the planetary alignments, given we hypothetically live on different planets. Through their new video installation piece Mass, June BALTHAZARD and Pierre PAUZE explore a debate in contemporary physics around the materiality of the world, with two real-life renowned physicists discussing that for some, space is empty, while for others, emptiness does not exist and the substance that fills it is perhaps the link that connects everything in the universe. As an ending note, Moving earths, a video of Latour’s lecture performance, explores the parallels between two perspectives on the moving Earth: the perspective as understood by Galileo Galilei circa 1610 and the contemporary perspective from James Lovelock who proposed that Earth is reactive to Human action, as formulated by the Gaia Hypothesis. 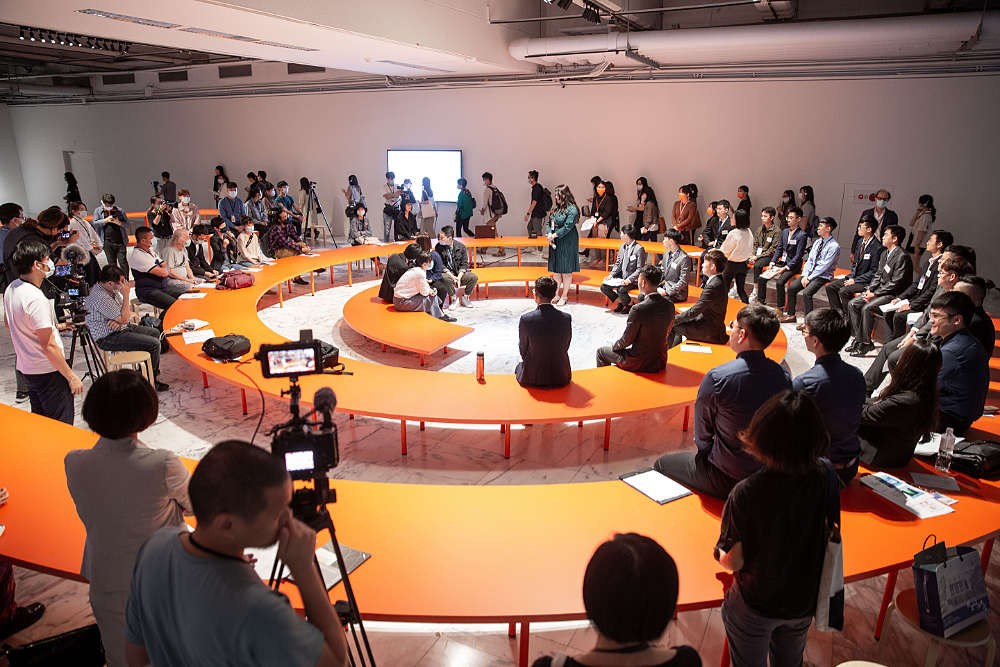 Coinciding with the biennial, the museum presents a series of Public Programs, representing the moments when different planets collide. The programs start with Theater of Negotiations, a practical implementation of the “political and diplomatic tactics,” the core concept of the biennial. Researchers and students from the Taiwan Science, Technology and Society Association and five universities engage in role playing, representing the various stakeholders (lobbyists, lawyers, NGOs, local politicians, etc.) who can discuss several social controversies that exist in Taiwan today, such as the climate emergency, nuclear waste, food safety, renewable energy, and even assisted conception. The program attempts to create pedagogical formats that make it possible to bring people who disagree together into the same room so that they can negotiate. Compass Workshop leads participants to reorient themselves, explore their own attachments, and seek their margin of maneuver to implement change in everyday life. The Wild Trail to the World consists of 3-day trekking workcamps with hunters, oceanographers, and anthropologists. The cross-disciplinary team will lead participants to use bodily perceptions to depict the land that traverses the boundaries of maps and together imagine a new way through.

During the time of the biennial, a film program curated by Grégory CASTÉRA and Erika BALSOM will screen a selection of 18 films. Titled Shoreline Movements, the program approaches the threshold between land and water as a material environment, but also as a provocative metaphor for the uncertainties and conflicts of worldly existence. This section is not a "planet" per se, but it addresses a series of themes that resonate with the biennial exploring how many people do not seem to share a common world anymore, and yet feel the need to find ways to engage with one another to avoid further degradation.

Ping LIN, Director of Taipei Fine Arts Museum, remarks: “Devastated by the pandemic, we realize how little we can control, and that we no longer have the privilege to overlook what’s going on in the world. We managed to open Taipei Biennial, but should take it as not only an event, but also an opportunity to force ourselves to reexamine human reality and existential situation.”

To kick off the biennial’s dynamic programs, a performance of Saunter in the Air, in which performers detects air quality with wearable devices, and a half-day symposium bringing together renowned international and local curators, artists and scholars to express their perspectives on this year’s theme were staged on the opening day. In December, TFAM’s Children’s Art Education Center located on the basement level will present its 11th project Satellite 11: Planet BioTa, which resembles a satellite circling “Taipei Biennial 2020.”