Interview with the artist about her work in the context of her home country Saudi Arabia. 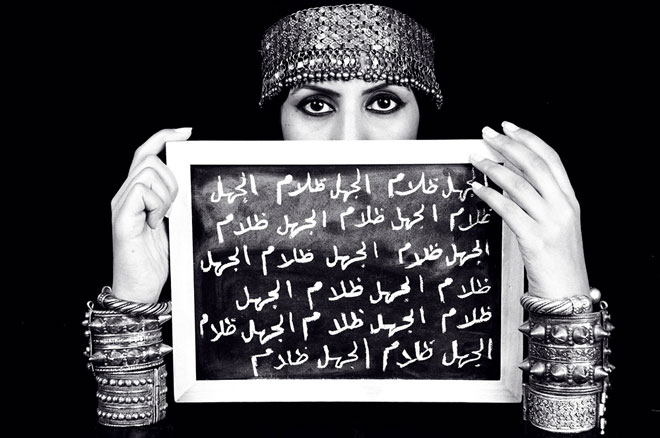 Manal Al Dowayan was born and raised in the Eastern Province of Saudi Arabia. Throughout her education, she attended art courses at various institutions in Saudi Arabia, Dubai, Bahrain, and London. Between 2009 and 2011, she was a resident artist at Delfina Foundation in London, Cuadro Fine Art Gallery in Dubai, and The Townhouse Gallery in Cairo. This year, her work was shown in the exhibition Edge of Arabia: Terminal, during the Art Dubai, UAE, and is still on view at The Future of a Promise, Venice Biennale, Italy.

Haupt & Binder: How would you briefly describe the main focus of your artistic approach to people who are not familiar with your work?

Manal Al-Dowayan: The artworks I create are usually a direct reflection of my life and the ups and downs that exist. You might find that my main focus is the Saudi women’s experience, but in some collections like Landscapes of the Mind and And We Had No Shared Dreams I explore more personal subjects. The basis of my work is black-and-white photography, although recently I have introduced more layers to the photograph and the ideas behind it. These layers come in different forms, like silkscreen prints, collage, spray paint, and neon and LED lights.

Haupt & Binder: Photographs of your series I AM were the first works we saw, about four years ago as part of the exhibitions The City & The Street (Muscat) and Self-Representation (Doha). We were impressed by the self-assertive charisma of the women, whom you portrayed wearing elements alluding to "male jobs" (engineer's safety helmet, physician's stethoscope) and traditional jewelry at the same time. Could you describe the context in Saudi Arabia that urged you to do this photo series?

Manal Al-Dowayan: This collection was inspired by a speech that King Abdulla Al Saud gave when he took the throne. He called upon all Saudis to come together to build our country, including specifically the importance of women’s participation. This was a positive time and generated huge hope and excitement across the country. But this raised a question: what kind of jobs are women going to be "allowed" to do? Later, the press and other opinion leaders interpreted the King’s speech to mean that women would only participate in jobs that "suit their nature". At the time I asked myself "what suits my nature as a woman? And who decides this?" This sparked the idea for the I AM collection. I invited women who work in a variety of jobs in Saudi Arabia – from engineers to mothers, from scientists to designers – to pose for me as a statement of their existence and as an inspiration to other women.

Haupt & Binder: In April 2011, we saw your new photographs with LED lights displaying text at Cuadro Gallery in Dubai and in the nearby Edge of Arabia: Terminal show. In those works, the subject appears to be the "City" or an urban landscape, but, when reading the poetic lines of text, it seems to be more about its inhabitants. How do you choose the texts and how do you relate them to the images?

Manal Al-Dowayan: I have always found the Arabic language to be very rich and beautiful, and the ability to gain multiple meanings out of a single word is inspiring, and for me it completes the creative process. When I work on a work series, it starts with a concept. I explore this concept through photography, research, and Arabic literature (this includes poetry and fiction). Because I am focused for over a year on a certain idea, everything I explore goes through a filter and certain phrases and verses inspire a photograph to accompany them and some need to stand alone – these are made in neon lights. In my collection And We Had No Shared Dreams there is an imagined conversation between the city’s inhabitants and the cityscape. These conversations were deeply influenced by the writings of Dr. Sahar Al-Khalifa, an empowered Palestinian novelist, and the poetry of the late Dr. Ghazi Al-Gosaibi, a Saudi politician and poet.

Haupt & Binder: You were telling us in Dubai that it was very hazardous for you to take those photographs of the bridge for the piece Nostalgia Carries Us. Could you explain again why?

Manal Al-Dowayan: Because it is difficult for me as a woman to stand in a street and take pictures and also because I cannot drive a car, I am forced to be creative in how I capture my images. I shoot from building rooftops and from the window of my car while someone else drives it. The resulting images are blurred views of landscapes titled Drive-by Shootings.

Haupt & Binder: In the exhibition Edge of Arabia: Terminal, beside the LED photographs you had the installation Suspended Together, which is currently on view at the Venice Biennale. You draw attention to the situation of women in Saudi Arabia (even very important ones), who need a permission document if they want or have to travel. How did you come up with the idea for this piece? And is this three-dimensional installation taking you to another expressive direction than the lens-based media that you have been exploring in the last years?

Manal Al-Dowayan: Suspended Together is a large installation that was a culmination of multiple years working on the same subject. The dove as expressive subject made its first appearance in my artwork in 2009’s Landscapes of the Mind. Later, doves were flying around on pieces made for my series And We Had No Shared Dreams in 2010. In Edge of Arabia: Terminal, I launched a 3-dimensional dove. In all of these artworks, the doves symbolize movement and imposed guardianship on women in Saudi Arabia.

All women in my country need a permission document to be issued by an appointed guardian when they have to travel, so I used these documents on the bodies of the doves. I asked many leading women from Saudi Arabia (scientists, educators, engineers, artists, etc.) to donate their permission document to this project and the result was a flock of doves that appear to be in flight, but in reality they were suspended and not moving.

This installation was a new experience for me and has allowed me to explore a new way of expressing myself. Although the photograph remains the basis of my work, I enjoy experimenting with other interesting mediums and techniques.

Haupt & Binder: Can you see or foresee changes for the situation of women in Saudi Arabia?

Manal Al-Dowayan: In 2005 I had created a collection called The Choice, which included an image that referred to the ongoing dialogue at that time about women’s participation in the political process in Saudi Arabia. This year, the King of Saudi Arabia decreed that women will participate in the 2015 Saudi municipal elections as nominees and as voters along with having them joining the Consultative Council, which was previously reserved for men only. A major change in my opinion!

With women being part of the decision-making process in the country, I do foresee progress and balanced representation of half of our society that had no voice in the past. These changes did not come by accident; there are active men and women who are working hard to make these changes in our society. The next major issues to be tackled in Saudi Arabia for women are guardianship and driving. Although I am optimistic, I am, at the same time, impatient.