Self-Representation in the Arabian Gulf

Perspectives in Photography and Video in the Arabian Gulf. Review of the exhibition in Qatar. 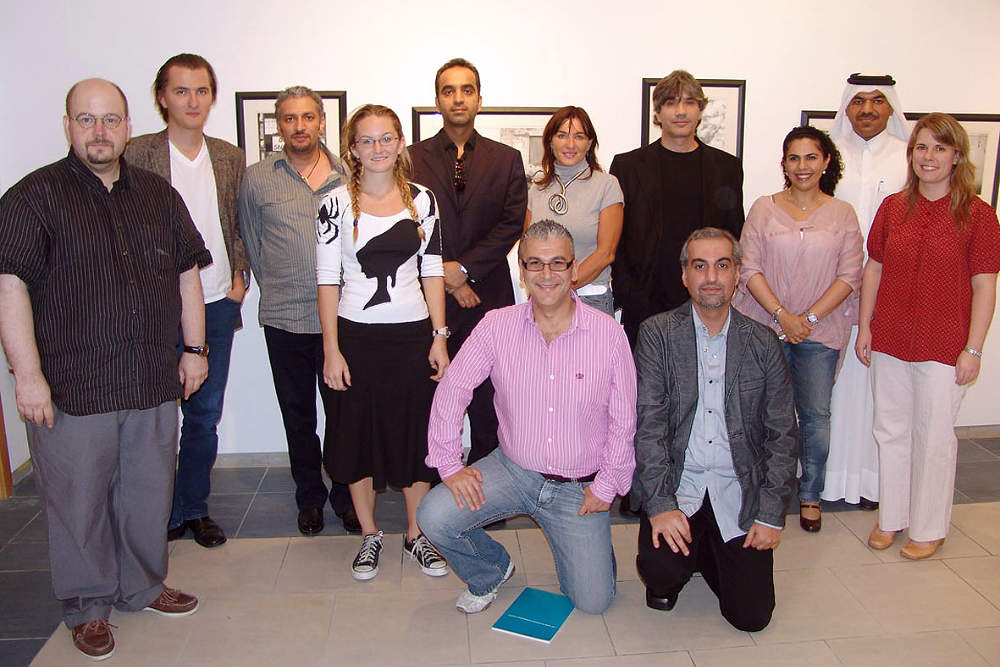 On October 24, the gallery of the Virginia Commonwealth University School of Arts in Qatar opened a group exhibition showing some of the most interesting artists currently working in the Gulf. The exhibition, carrying the studious title "Self-Representation in the Arabian Gulf, Perspectives in Photography and Video," was curated by Natalie Bailey and Sally Van Gorder, who are both esteemed academics and artists.

Given the serious tendencies that usually accompany art production concerned with self-representation and identity, this exhibition surprisingly carried a lighthearted tone of cool humor, tough attitude, and love for the Arabian Gulf landscape and its iconic cultural artifacts. As conflicting as it is, in an effort to analyze the artifice and construction of representation, role-play is a common strategy in representing the self. Often one needs the gaze of the other to perceive the self. The exhibition included self-portraits and depictions of the desert and the city, utilizing strategies of narrative sequencing as well as iconic singular photographs.

Strategies of representation involved the use of cultural artifacts such as the Hijab, national dress, the "local" cityscape, and the desert. They appear as symbolic props suggesting a sense of local character, whether artifice or reality.

Hassan Meer sits opposite himself at a garden table on the beach, one time dressed in suit and pants, one time in Omani dishdasha. The doubled figure is simultaneously from the past and the present, but only if we choose to see it this way. Hassan examines memory and tradition, which is a state of the present, and positions it in terms of coexistence rather than conflict.

Manal Al-Dowayan enacts career portraits of historical Saudi women. At the same time she points to the role of the woman artist in contrast to the "respectable" careers of engineering and medicine. The images remind one of high school portraits in which the students are asked to imagine what they want to be when they grow up. They pose for the portraitist using props from the symbolic but generic pile of stuff. For Manal, the signifiers range from the petroleum engineer's hard-hat to the physician's stethoscope. What is striking is that behind the masquerade of the costumes the sharp gaze of the woman looks straight out at the viewer. Much like Cindy Sherman's Untitled Film Stills from the 70's, the gaze pierces through the image in an uncanny way, forcing us to reconsider the image entirely. However, unlike Sherman, Manal is not examining accepted representations of women in cinema. She is pointing out the absence of representations of women at work. Some costumes, like the engineer's hard-hat, look masculine on her, giving the image an absurd humor. I found myself asking: why should the idea of women at work be funny?

Lens-based media engage the visual language of description, potentially facilitating the transformation of the banal into the symbolic. Tarek Al-Ghoussein's blue cloth fragments transcend their existence as small rubbish pieces in the sand to become home and shelter, synonyms for what we perceive as identity. In a short photographic sequence, the blue material creeps from the interior of the sand dune to become its cover. In the final image of the sequence it engulfs the body of the figure standing in the center. Tarek's synthetic blue is outside of the color range of the natural desert and comes into view as a foreign body in the landscape. The simple sequence marks the process of how culture adheres to nature. The artist is not passing didactic moral judgment. The images simply and cleverly point out the obvious.

Anas Al-Shaikh's troop of "goalkeepers" protects the landscape from the eyes of tourist naivety. The figures standing guard in front of the wall, like Leonardo's figure studies, are anatomically mapped out by a layer of white lines on the surface of the photograph. In another piece, by controlling a mouse placed on a pedestal, the viewer navigates through an interactive video projection. The main portal is the image of a hand, and by clicking on the fingertips one enters a maze of imagery, sound emissions and textual messages. A particular interactive environment is a dark map that becomes activated, visually and sonically shouting Palestinian cities at us, on mouse-over. Another location cleverly simply states: "maybe we are out of history". From page to page, the invisible becomes visible on active and close inspection.

Mohammed Kazem stands under the flags of development, watching the landscape transform from the minimal desert space to the postmodern cityscape. Every brick on the pure sand creates contrast with what was there before. The lone figure becomes as much a construction within the landscape as the rising structures in front of it.

In a photographically documented performance, Ebtisam Abdul Aziz hilariously wears her personal ATM bank transactions on her figure, literally speaking. As she goes throughout her mundane daily routine, she performs from people watching to shopping in the grocery. The printed numbers on the full body suit report the date and time of her economic activity symbolically reducing her autobiography to money exchange. Roqaya Al-Thani and Nuha Asad explore the role of the woman in terms of female dress and its connotations of privacy and secrecy.

Khalifa Al-Obaidly points the camera lens at the viewer, like a marksman, with only one eye showing. Camille Zakharia's nostalgic visions of the Gulf topography use photomontage to reveal a disappearance of what is old but never got a chance to be old in the first place. The beautiful vistas are montaged sights of time frozen.

Madeline McGehee and Loredana Mantello, who are not native to the region, brought into the exhibition a foreigner's insight into the Gulf. They both pose in their photographs, placing themselves inside rather than being sideline observers. These photographers strayed away from the tourist's reportage of the exotic desert region and the local natives, the Arabs. They subtly acknowledged their difference by the simple gesture of the self-portrait within the Arab environment.

Through critique and questioning, the artists raise complex issues of self-analysis. Most of the works in the exhibition revolve around key issues of the rapidly changing terrain in the Gulf. Whether this change is cultural or physical, each impacts the other. These issues are difficult and, much like the malleability of culture, they require rethinking and reevaluating. Self-representation can work in a positive way only if it is never stabilized.

VCU School of the Arts