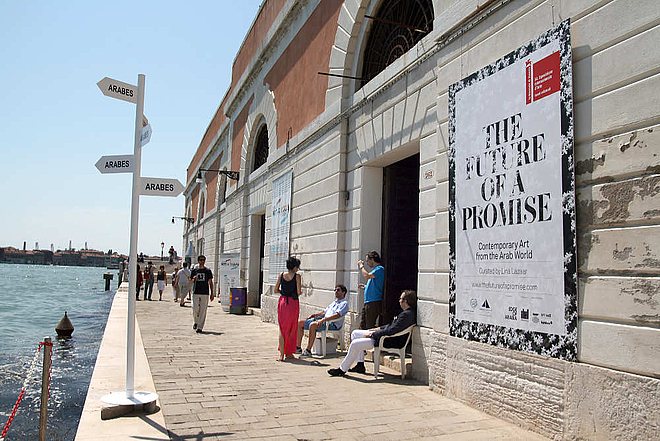 The Future of a Promise is the Venice Biennale's largest Pan-Arab exhibition of contemporary art. From Tunisia all the way to Saudi Arabia, this landmark exhibition brings together more than twenty-five recent works and commissions by some of the foremost artists from the Arab world.

The exhibition is curated by Lina Lazaar, produced by Edge of Arabia and supported by Abdul Latif Jameel Community Initiatives and Abraaj Capital, three newly partnered organisations whose commitment to contemporary art practice in the Middle East is at the heart of a current artistic renaissance in the region.

The Future of a Promise examines the way in which an idea is made incarnate in a formal, visual context and how a promise opens up a horizon of future possibilities, be they aesthetic, political, historical, social or critical. With the events currently unfolding in the Middle East, the question of the future and the promise inherent within culture has assumed an even more acute degree of pertinence. It is with this in mind that the exhibition enquires into the promise of visual culture in an age that has become increasingly disaffected with politics as a means of social engagement. Whilst the artists included in The Future of a Promise are not representative of a movement as such, they do seek to engage with a singular issue in the Middle East today: who gets to represent the present-day realities and the horizons to which they aspire?

"Through the artworks selected, I wanted to investigate how artists from this diverse, fragmented region have responded to the often contradictory promises that have defined our history," says curator Lina Lazaar. "I am incredibly proud and honoured to be putting together this exhibition in 2011, at such critical times for the Arab world, and I very much hope to create the rightful platform for these voices to be heard."

Curator: Lina Lazaar
Lina Lazaar has an M.A. in Statistics and M.A in Art History and is a specialist at Sotheby's London in Post War and Contemporary Art. Her passion for Arab and Iranian Contemporary Art led Sotheby's to hold their first European auctions in this category in 2006. Since then she has curated these sales annually and significantly increased the international exposure and discussion of Middle Eastern contemporary art. Lina is the associate editor of the publishing forum Ibraaz and member of the Middle East North Africa Acquisitions Committee of the Tate in London.