Biographies of the Curators 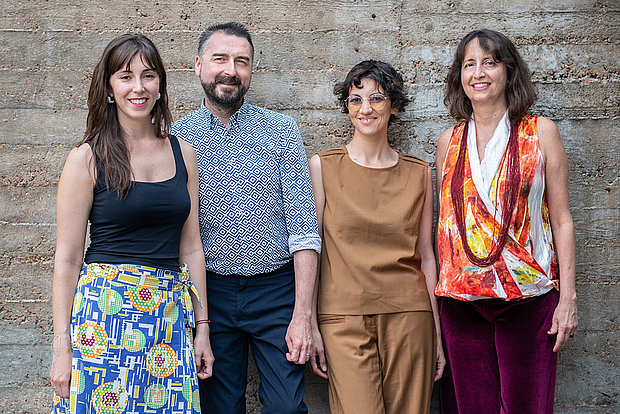 (* 1978 Santiago de Chile) A sociologist, writer, independent curator, and cofounder of the Chilean editorial collective vaticanochico. Her work traverses art, culture, and politics with a special interest in the collective experiments of the Third World movement and their exhibition formats in the 1960s and 70s. She teaches and lectures regularly in Europe and Latin America and has published extensively on art and politics in Latin America and beyond.

Berríos has been engaged in several collaborative art projects, including The Revolution Must Be a School of Unfettered Thought (together with artist Jakob Jakobsen for the 31st Bienal de São Paulo, 2014). She is an ongoing collaborator of the Hospital Prison University Archive (Copenhagen, 2016–to date), a project space and radio station run by artist Jakob Jakobsen in the building where he and Berríos live together with their three-year-old son Teo, who believes he is a ninja.

(* 1985 Buenos Aires) Has an ongoing curiosity for artistic practices in dialogue with language, public space, and body memories. She has researched the pedagogical programs of the Mercosul and São Paulo biennials, looking into how performance can result in critical mediation and the possibilities for negotiation and debate that this offers within different contexts. In 2013–14 Cervetto participated in the De Appel Curatorial Programme in Amsterdam, followed by a fellowship to develop a one-year public program at De Appel in 2014. This also included a compilation of her research in The Fellow Reader #1. On Boycott, Censorship and Educational Practices (De Appel, 2015). From 2015–18 she coordinated the education department of the Museo de Arte Latinoamericano de Buenos Aires (MALBA).

Cervetto coedited the publication Agítese antes de usar. Desplazamientos educativos, sociales y artísticos en América Latina (TEOR/éTica, San José, and MALBA, Buenos Aires, 2017, with texts by Lisette Lagnado, among others) together with Miguel A. López. In recent years, she has been exploring how consciousness (or self-awareness) can be developed through pedagogical-poetic exercises.

(* 1961 Kinshasa) A researcher, art critic, and independent curator interested in strategies for collaborating with sociologists and architects in public space. As a young child she never understood why people lived on the streets and spent her time speaking with them. She was chief curator of the 27th Bienal de São Paulo How to Live Together (2006) and curated Drifts and Derivations: Experiences, journeys and morphologies together with María Berríos (Museo Nacional Centro de Arte Reina Sofía, Madrid, 2010).

Recent projects of her include Rivane Neuenschwander: The Name of Fear | Rio de Janeiro (Museu de Arte do Rio (MAR), Rio de Janeiro, 2017) and León Ferrari, For a World with No Hell (Galeria Nara Roesler, São Paulo and New York, 2018). In 2014 Lagnado became director and Curator of Public Programs of the Escola de Artes Visuais do Parque Lage in Rio de Janeiro, a position held until 2017.

(* 1972 Valencia) Has a curatorial and institutional practice relating to collaborative projects, gender and feminist issues, linguistics, architecture, politics, and postcolonial perspectives. In his early childhood he was fascinated by his mother’s makeup, wigs, and dresses. He was artistic director of Museo de Arte Latinoamericano de Buenos Aires (MALBA, 2014–18) and chief curator and director of Museo de Arte Contemporáneo de Castilla y León (MUSAC, 2003–13).

Pérez Rubio is curator of the Chilean Pavilion for the Biennale di Venezia in 2019 where he presents the work of artist Voluspa Jarpa. He is currently a board member of CIMAM and member of the Istanbul Biennial advisory board.

From press information
© Photo of the curators: F. Anthea Schaap