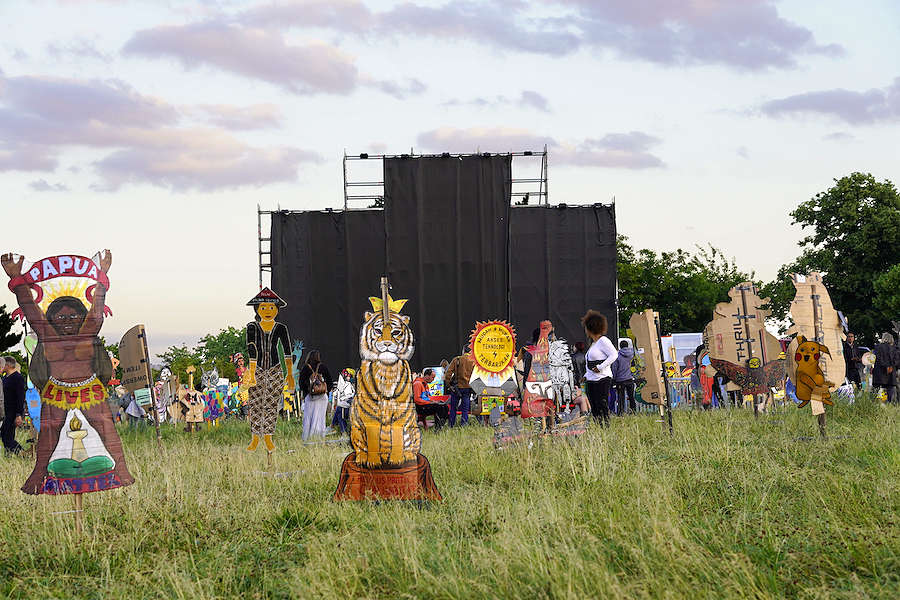 The covered work "People's Justice" by Taring Padi at documenta fifteen in Kassel. Together with the banner, Taring Padi exhibited more than 600 new wayang kardus (cardboard puppets) on Friedrichsplatz, which hundreds of people from different countries had created in workshops.
© Photo: Courtesy Taring Padi

"People's Justice" the wall size banner created by Taring Padi in 2002 was already covered with a black cloth, when it was taken down two days after the opening of documenta 15. Its “removal under pressure” was tsunami like. Many of us, art workers in Indonesia, could not believe that an exhibited artwork could be taken down so easily at a prestigious exhibition in a developed country, such as Germany. Questions arose corroding the belief that in the West artistic freedom exists as a form of democracy.

In Indonesia’s history, the banning of artworks – especially at major events – has always been frightening occurrence. We automatically think of the artists’ safety, in this case the safety of our friends, who at that time were in a distant Northern country. We prayed that they will be safe. This is a self-defence mechanism born out of the fear that plagued us during the era of Suharto, the Indonesian president who was toppled by people’s power in 1998.

Discussions were conducted secretly by phone, group chat, or in small groups. Apparently, we had become accustomed to a certain secrecy, which we needed whenever speaking of government condoned atrocious incidents. Now, it was the German government. A country whose constitution stands by freedom of expression. But not for the "People's Justice" banner by Taring Padi from Indonesia. The reality hit us: artistic freedom does not fully exist, since there are always exceptions, even in democratic countries.

Of course, great hopes rested on Taring Padi to oppose the removal of their work with strong argumentation. The same hope also rested on the nine members of the ruangrupa collective, the Artistic Direction of documenta 15. But apparently, Taring Padi was not given the opportunity to defend themselves nor to explain. Even after covering their banner and retitling it "Monument of Mourning" to signal their appeal to discussion and grief of it not coming to pass, the "People's Justice" banner was already being taken down. The decision to remove this work was absolute, made by whoever had the power to do so. The act triggered intense emotional feelings. Pain. Sadness. Anger. Hurt. Insulted. Even art workers in Indonesia felt bereft.

Friends in Europe, or those who have lived in Europe for a long time, tried to explain the problem at length. Hours. Days. Weeks of talking. In this period, we read, learned and organized open discussions to understand the history of anti-Semitism.

Anti-Semitism represents a history of wounds, how could we not realize this in Indonesia? Looking inwards, we reflected on how we could be oblivious to such a massive transgression towards humanity? Could the 1965/66 events in Indonesia, where hundreds of thousands - maybe even millions - of people charged as communists or only accused of being socialists, were killed or decades long imprisoned without trial be ignored as part of a nation's history? There has been little acknowledgement of our own bitter and dark history. Instead, a frightening stigma surrounds the survivors, both society and government still avoid its discussion. Has this experience also made us so insensitive to the Holocaust in Europe? It is not impossible.

Taring Padi is a small group of brave people who openly express their opinions. They stand up to voice concerns of people who are marginalized and oppressed. Challenging the norm, they speak of the 1965/66 massacres in Indonesia and voice the injustices of its hundreds of thousand cases. As a collective, they often join communities to work together, and in these works they guarantee free expression and artistic freedom to their participants. It is a format which puts Taring Padi itself at great risk, as has happened with "People's Justice" in documenta 15, where they endure a continuous onslaught of accusations for the freedom of speech which they had fought for. It seems therefore appropriate, that in the vast field of Friedrichsplatz in Kassel, one sees an almost imperceptible ghost of the "Monument of Mourning" standing along with hundreds of cardboard puppets which also no longer exist. If it is true, as stated by the curator, that the documenta 15 sees artwork as becoming part of the community. And that here works are not placed within the sterile environment of a white cube. So then, when society demands that this work be taken down, and when Taring Padi then accepts the work’s presence as a mistake and apologizes for their incomprehension of the local community’s historical wounds, then "People's Justice" should be documenta 15’s most successful work. Because, the community was so strongly involved in this artwork.

Ongoing events have stoked much emotions and resentment. Those with an interest in maintaining history are adamant on respect for its antisemitic wounds. While those who have continuously fought for artistic freedom and freedom of expression, just saw their struggle being torn down by events at documenta 15, and dearly needed to restructure their struggle. Feelings of shame and disappointment became prolonged as the accusations dragged on without resolve, while the fragile solidarity among anti-anti-Semitic and anti-colonialist people appeared to have broken down. Primordial suspicion and prejudice increased without notice creating distance between individuals and groups. Racism, harassment, and violence have increased against documenta 15 participants. And several collectives have reported damages and theft to their works.

The Documenta was not founded to create new wounds, definitely not like those ensued at documenta 15. How so many works of art could be silently taken away in an ever-growing war of power can only point to politics and not art. What we see from a distance is a fierce showdown and not a celebration of art. At documenta 15 art has been oppressed. Instead this exhibition has become a celebration of wounds provoked by those with vested interest. This, of course, is sad.

We have come halfway to the end of the hundred-day documenta 15. As spectators, especially at this distance, we are still exiled from the works presented there by the ongoing discourse. This, though, may also be caused by the curatorial concept which focuses on the process. As written in the catalogue, a great part of the process are discussions, and these only take place among the participants.

At a discussion at the Jogja National Museum in Yogyakarta on August 14, 2022, a documenta 15 participant, stated that their main activity was meetings. In fact, according to a a ruangrupa member, the meetings already began two years before the exhibition opened. If meetings were both a method of work as well as the art work itself, then the curatorial has steered documenta 15 into an exclusivity alienated from the wider community. Thus, it has removed itself far away from people, from us, from the public. And for distant audiences, the remaining memory is limited to censorship – like the news of the removal of "People's Justice" followed by an examination of all works and unstopping accusations, even towards the exhibit’s end.

The removal of artwork followed by censorship depicts, why Taring Padi named the covered work "Monument of Sorrow". This piece may now be invisible, but actually stands tall in the sprawling Friedrichsplatz where "People's Justice" once stood. The empty space has now become a symbol that encompasses the entire documenta 15, a monument of remembrance which reminds us, that – if not soon resolved – the stigma will stay forever and will be in memoriam that we are actually equal, and have both power and ability to create wounds. A monument to the memory of celebrating a freedom of art that is ethically aware in its aesthetics.

Freedom in arts, no matter how small, is necessary for all mankind. Especially, when life is so full of rules and exhaustively burdening restrictions. Art should offer a path of liberation. Documenta has always showcased art without pretention, because art has the ability to touch the human heart. Thus, even now art has the potential of abridging solidarity, humanity and peace. If in 1955 the Documenta was founded to heal the wounds of war, I believe it should also do so now.

© Text: Titarubi
© Translation from Indonesian: Edith Koesoemawiria
An Indonesian version of this text was published by Deutsche Welle Online on 19 August 2022 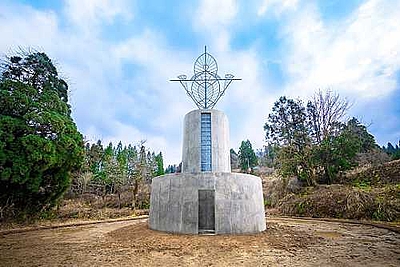