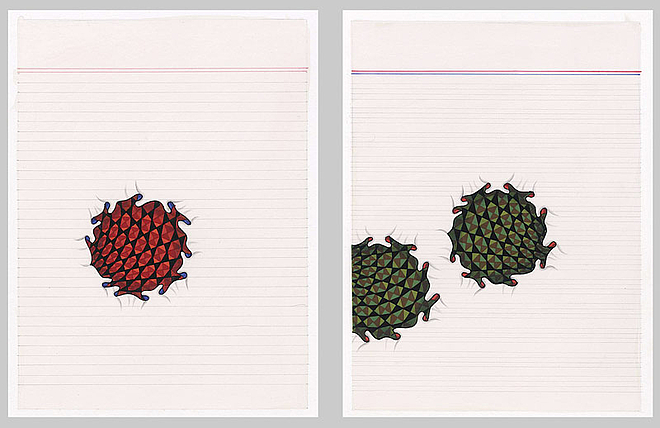 After participating in two group exhibitions of Zilberman Gallery —Minor Heroisms (Istanbul, 2005) and The Red Gaze (Berlin, 2016)— Aisha Khalid is now featured in a solo show in Berlin. Under the title I Am and I Am Not, the exhibition consists of various paintings, a diptych in book form as well as a site-specific installation. Strongly influenced by the figurative miniature tradition of the Mughal Empire, the Pakistani-born artist, takes the tradition one step further and contemplates on contemporary issues such as the female figure, the global politics and the uncertainty surrounding us.

In the works that Aisha Khalid has created for the exhibition I Am and I Am Not—with one exception, they all date from 2017—there are few figurative allusions. Only When I Am Silent features a gold-leaf tulip in the middle of a perspectively-designed blue room. The viewer spontaneously associates the ‘I’ in the painting’s title with the precious tulip. A vertical floor line runs through the tulip like a cut, transporting the flower into a different world, as it were. Another figurative element in this and many other paintings by Khalid is the undulating hem of an earthy reddish curtain which like a pelmet runs along the upper edge of the painting. A second hem (belonging to an otherwise invisible curtain) divides the blue room into a front and rear, or a lower and upper section (if the viewer’s gaze follows the upward direction suggested by the veil-curtain). Like an immaterial appearance, the golden tulip as a metaphor of the idealized perfection of all things beautiful (its pink-white tips being suggestive of divine love) rises exactly on the border of these two worlds.

I Am and I Am Not is the title of both the exhibition and a poem by the Islamic mystic Rumi (1207-1273), who is also one of the major Persian poets and scholars of the Middle Ages and whose son is considered to have founded the order of the Whirling Dervishes. One of Rumi’s poems may provide some clues concerning the significance of the curtain:

When my bier moveth on the day of death,
Think not my heart is in this world.
[…]
When thou seest my hearse, cry not ‘Parted, parted!’
Union and meeting are mine in that hour.
If thou commit me to the grave, say not ‘Farewell, farewell!’
For the grave is a curtain hiding the communion of Paradise.
[…](1)

The longing for the other world, for the merging of the worlds on either side of the curtain, for unio mystica, makes it easier to understand the title and composition of paintings such as Two Worlds as One, At the Circle’s Centre and I Am and I Am Not.

Intensely engaging in traditional miniature painting, Aisha Khalid has moved away from figurative representation to abstraction—a move that bears witness to her increased interest in Islamic mysticism. The art historian and philosopher Heinrich Lützeler once described the effect of such a representation as follows: “It is by weaving themselves into this fabric that pondering contemplators and contemplative ponderers forget their own selves.”

With the triptych Divided and the four-part painting At the Circle’s Centre, things are different. In the interview with Simone Wille (published in the catalog of the exhibition at Zilberman Gallery–Berlin), Aisha Khalid says that the current state of our secular world can be gleaned from these works. In them, the center has shifted and is even in danger of being lost from view—a shift that can be interpreted in political, social, philosophical, or religious terms. Aisha Khalid is no unworldly mystic but she knows the strength that is released When I Am Silent. 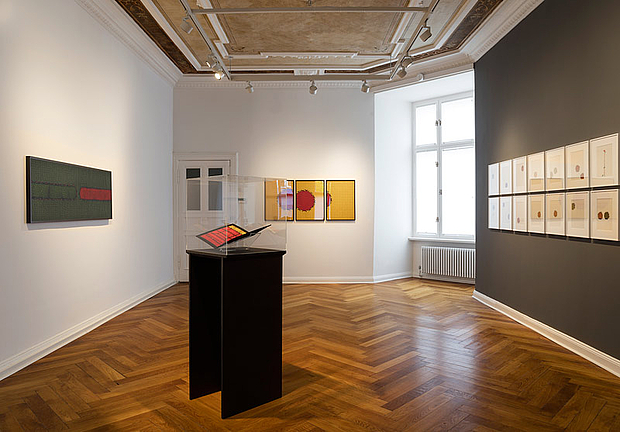 I Am and I Am Not is Aisha Khalid’s first solo exhibition in Berlin. The artist, who lives in Lahore/Pakistan, graduated from the National College of Arts, Lahore, in 1997, Pakistan’s oldest art institution, and did her post-graduation at the Rijksakademie, Amsterdam, in 2002. She has participated in exhibitions such as Moscow Biennale (2013), Sharjah Biennial (2011), Venice Biennale (2009), and the Fukuoka Triennale (2001). Her work is displayed in several museums and private collections all over the world, including the Aga Khan Museum (Toronto), M+ Museum (Hong Kong), Victoria & Albert Museum (London), Fukuoka Asian Art Museum (Japan), World Bank (USA), Sheikh Zayed Museum, Abu Dhabi and Sharjah Art Museum (United Arab Emirates).

During the opening on April 27, Zilberman Gallery hosts ITINERANT INTERLUDE #14 with performances by Christine Paté (accordion) and Matthias Badczong (clarinet) in a program curated especially for I AM AND I AM NOT. The series ITINERANT INTERLUDES is curated by Laurie Schwartz with the support of the initiative Neue Musik Berlin.

I AM AND I AM NOT is accompanied by a catalogue, with a preface by Lotte Laub and texts by Simone Wille, Timo Kaabi-Linke and Atteqa Ali. Press preview will take place on April 27 at 11 am at Zilberman Gallery–Berlin.