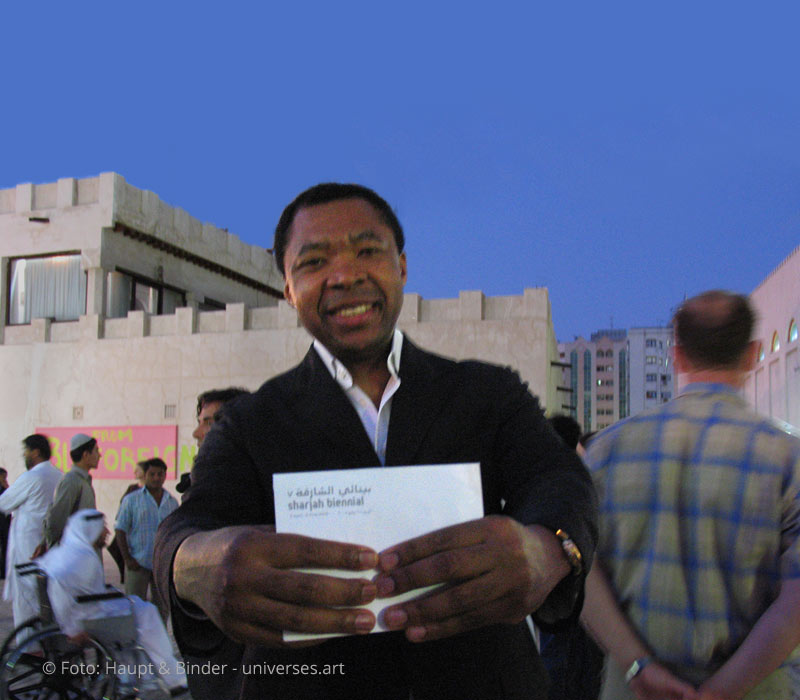 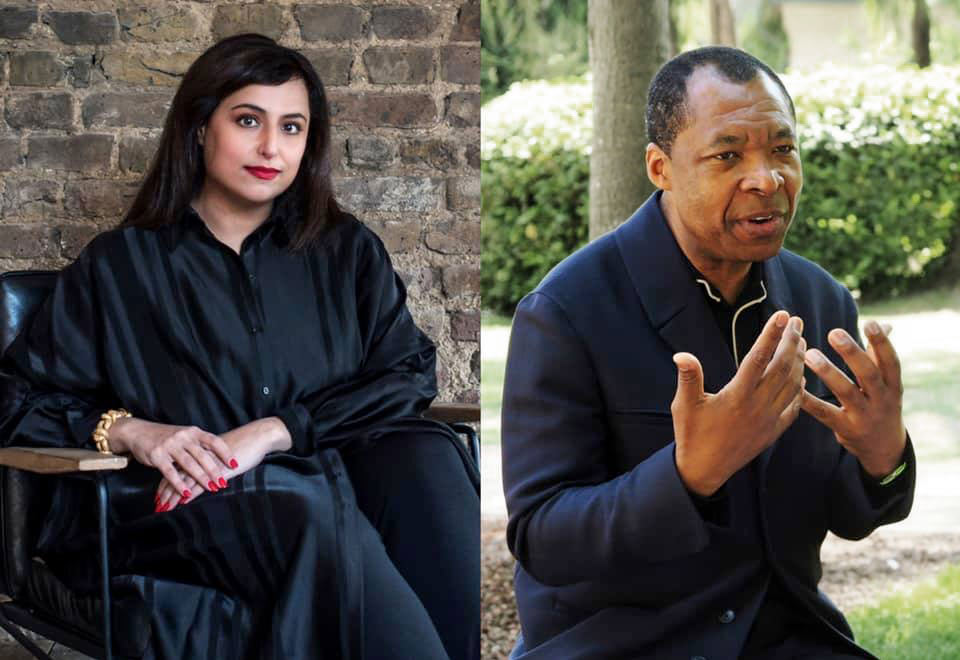 The 15th edition of the Sharjah Biennial will feature works by over 150 artists from more than 70 countries including never-before-seen works and 30 major commissions, presented at 16 venues across the emirate.

Conceived by the late Okwui Enwezor and curated by Sharjah Art Foundation (SAF) Director Hoor Al Qasimi, Sharjah Biennial 15: Thinking Historically In the Present (SB15) reflects on Enwezor’s visionary work, which transformed contemporary art and established an ambitious intellectual project that has influenced the evolution of institutions and biennials around the world, including the Sharjah Biennial.

For Enwezor, the contemporary art exhibition provided a means to engage with history, politics and society in our global present. He envisioned the invitation to curate this edition of Sharjah Biennial as a way to reflect on and contribute to the Biennial’s history and that of the overarching Foundation, and their role in addressing the need for institutional models outside of the West that support dialogue and the production and presentation of contemporary art responsive to our times. Enwezor proposed commissioning 30 works for SB15 to celebrate Sharjah Biennial’s 30-year anniversary and to meaningfully activate this critical platform through the development of new productions.

“These commissioned artists build on Enwezor’s vision that transformed how we understand and engage with contemporary art and its institutions. Although he worked with many of these artists, I felt it was important to include other voices that bring his proposal into our immediate present and leverage the critical role that he believed the Sharjah Biennial could play in this endeavour,” said SAF Director and SB15 Curator Hoor Al Qasimi. “Reflecting on the relentless devastation of COVID-19 in many parts of the world, as well as the uneven access to vaccines and restrictions to travel still in place, SAF has made the decision to open Sharjah Biennial 15 in 2023. Our goal is to give artists and our audiences the necessary time to tend to what is most urgent around them. We hope to be able to gather in Sharjah once again with renewed energy and appreciation for the way art can bring complex questions into focus.”

SB15 began with the 2021 edition of the March Meeting—an integral part of Enwezor’s plans for SB15—which is the Foundation’s annual convening of artists, curators and art practitioners to explore critical issues in contemporary art through panels, lectures and performances. Held from 12 to 21 March 2021, March Meeting 2021: Unravelling the Present examined the 30-year history of the Sharjah Biennial and the future of the biennial model.

March Meeting 2022: The Afterlives of the Postcolonial, held from 5 to 7 March 2022 analyzed the legacies of colonialism and the contemporary impacts of related issues on cultural, aesthetic and artistic practices around the world.

March Meeting 2023 continues the exploration of the Sharjah Biennial 15 themes while the exhibition is on view, from 9 March through 12 March 2023. 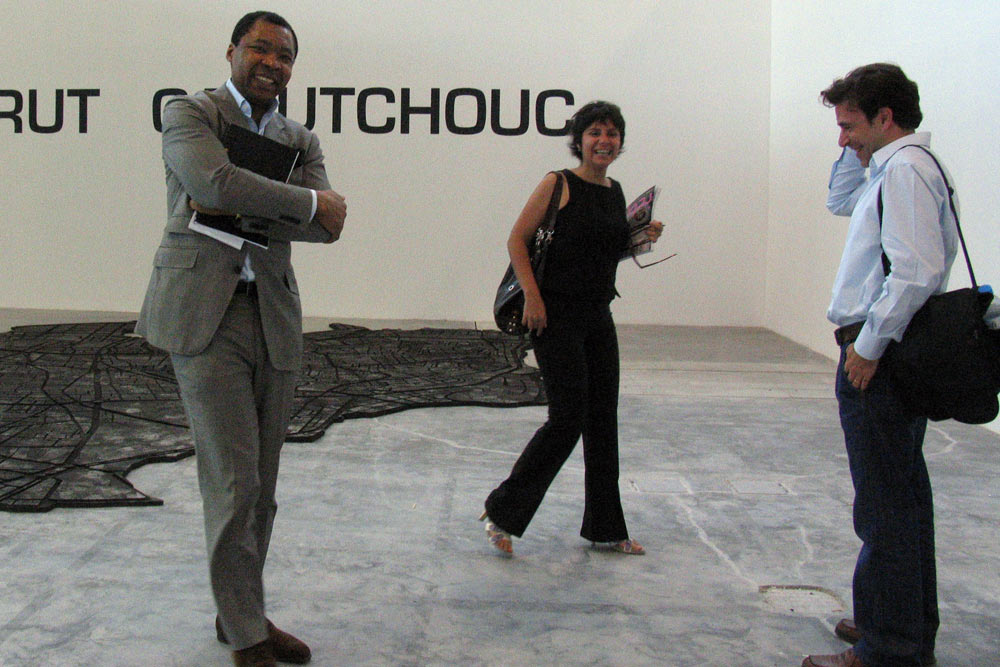 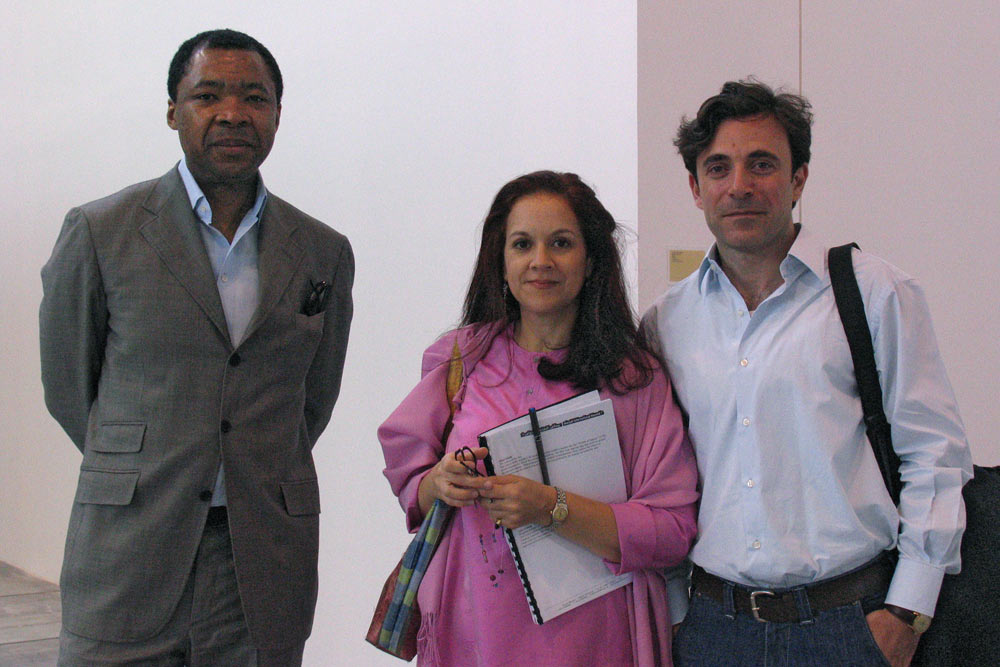 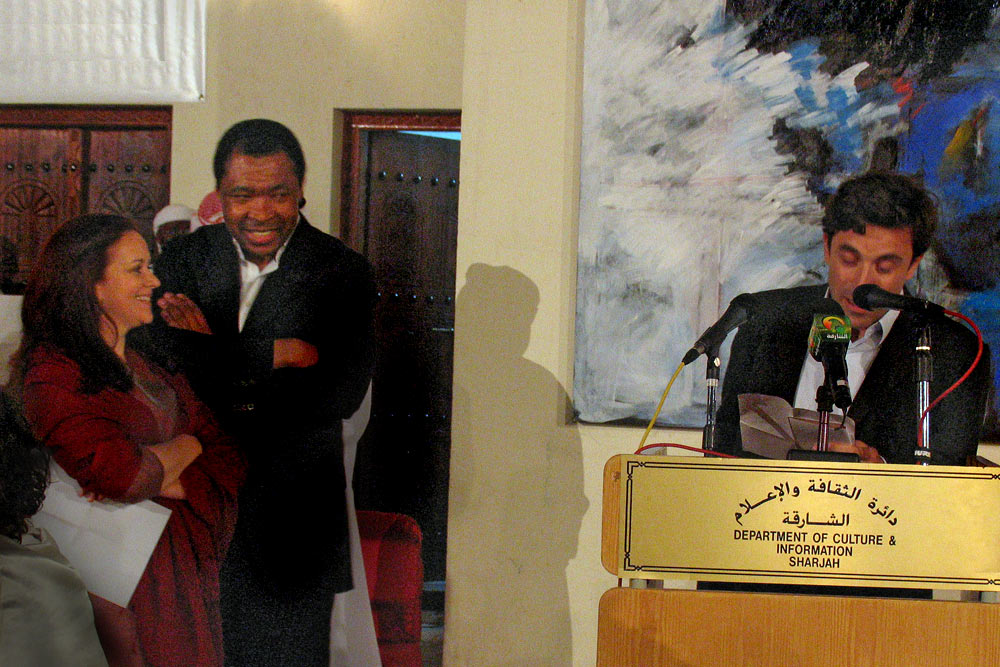 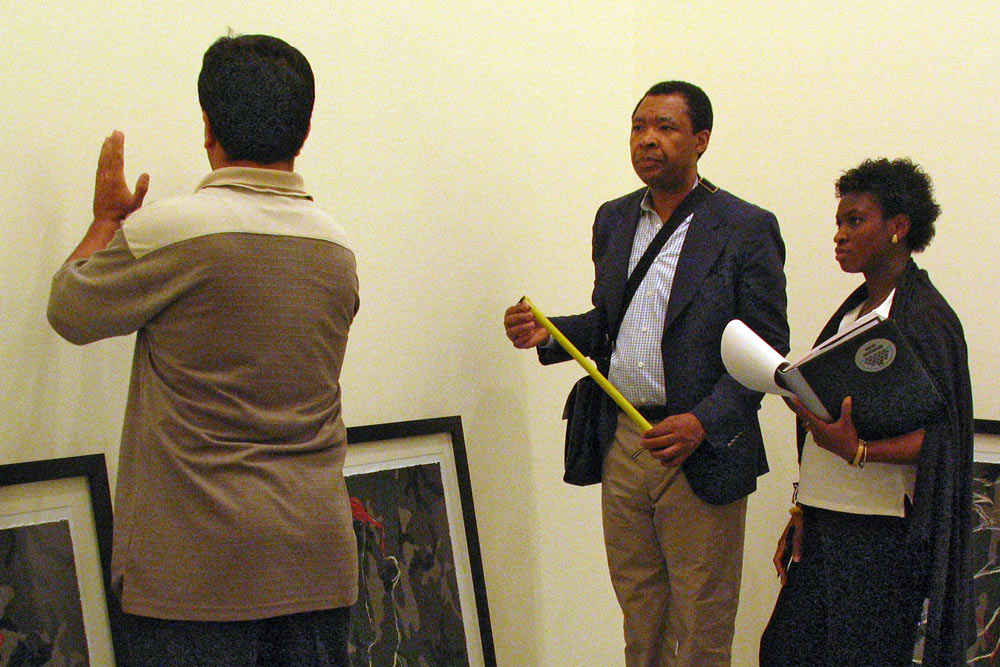 Enwezor served as Director, Haus der Kunst, Munich (2011–2018) and Dean of Academic Affairs and Senior Vice-President, San Francisco Art Institute (2005–2009). He was Global Distinguished Professor in the Department of Art History, New York University (2013) and Kirk Varnedoe Visiting Professor at the Institute of Fine Arts, New York University (2012). Among his publications are Postwar: Art between the Pacific and the Atlantic, 1945–1965 (Prestel Publishing, 2017), which he co-edited; Rise and Fall of Apartheid: Photography and the Bureaucracy of Everyday Life (Prestel Publishing, 2013); Contemporary African Art Since 1980 (Damiani, 2010); Antinomies of Art and Culture: Modernity, Postmodernity, Contemporaneity (Duke University Press, 2009); and Reading the Contemporary: African Art from Theory to the Market (Iniva, 1999). In 1994, he co-founded NKA: Journal of Contemporary African Art.

President of the International Biennial Association; Chair of the Board, Sharjah Architecture Triennial; Chair of the Advisory Board, College of Fine Arts and Design, University of Sharjah; and President of The Africa Institute, Sharjah, Al Qasimi serves on the Board of Directors for MoMA PS1, New York; Kunst-Werke Berlin e. V.; and Ashkal Alwan, Beirut as well as advisory boards for Khoj, New Delhi and Darat al Funun, Amman. She is also a member of the Prince Claus Award Committee (2016–present).

Tarek Abou El Fetouh is an independent curator who has developed conversations among practitioners within and beyond the Arab world through the establishment of major initiatives such as Meeting Points - Festival for Contemporary Arts and the Young Arab Theatre Fund (recently renamed Mophradat). He was one of the curators for Sharjah Biennial 9 (2009).

Ute Meta Bauer is a curator, editor (Afterall magazine), Founding Director of the NTU Centre for Contemporary Art Singapore and a professor at the School of Art, Design and Media at Nanyang Technological University, Singapore.

Salah M. Hassan is Director of The Africa Institute, Sharjah, UAE, and Goldwin Smith Professor in the Africana Studies and Research Center and the Department of the History of Art and Visual Studies, Cornell University, Ithaca, US. He is an art historian, art critic, curator and founding editor of Nka: Journal of Contemporary African Art.

Chika Okeke-Agulu specializes in indigenous, modern and contemporary African and African Diaspora art history and theory. He is a professor and Director of Graduate Studies in the Department of Art and Archaeology at Princeton University. He is co-editor of Nka: Journal of Contemporary African Art and maintains the blog Ọfọdunka.

Octavio Zaya is an independent curator and writer, and is Executive Director of the Cuban Art Foundation. He serves on the advisory boards of the Museo de Arte Latinoamericano de Buenos Aires (MALBA) and Performa, New York, and he is a member of the Editorial Board at Nka Journal of Contemporary African Art.

Sir David Adjaye OBE is recognized as a leading architect of his generation. In 2000, he formed his studio, Adjaye Associates, with offices in London, New York and Accra and projects spanning North America, Europe, Africa, Asia and the Middle East. His largest project to date, the $540 million Smithsonian National Museum of African American History and Culture, opened on the National Mall in Washington, DC in autumn 2016.

Christine Tohme is the Founding Director of Ashkal Alwan, a non-profit organization established in 1993 in Beirut that aims to support contemporary artistic and cultural practices through its numerous initiatives. She curated Sharjah Biennial 13: Tamawuj in 2017.

Sharjah Art Foundation is an advocate, catalyst, and producer of contemporary art within the Emirate of Sharjah and the surrounding region, in dialogue with the international arts community. Under the leadership of founder Hoor Al Qasimi, a curator and artist, the foundation advances an experimental and wide-ranging programmatic model that supports the production and presentation of contemporary art, preserves and celebrates the distinct culture of the region, and encourages a shared understanding of the transformational role of art.

The foundation’s core initiatives include the long-running Sharjah Biennial, featuring contemporary artists from around the world; the annual March Meeting, a convening of international arts professionals and artists; grants and residencies for artists, curators, and cultural producers; ambitious and experimental commissions; and a range of travelling exhibitions and scholarly publications.

Established in 2009 to expand programmes beyond the Sharjah Biennial, which launched in 1993, the foundation is a critical resource for artists and cultural organisations in the Gulf and a conduit for local, regional, and international developments in contemporary art.

The foundation’s deep commitment to developing and sustaining the cultural life and heritage of Sharjah is reflected through year-round exhibitions, performances, screenings and educational programmes in the city of Sharjah and across the Emirate, often hosted in historic buildings that have been repurposed as cultural and community centres.

A growing collection reflects the foundation’s support of contemporary artists in the realisation of new work and its recognition of the contributions made by pioneering modern artists from the region and around the world.

Sharjah Art Foundation is a legally independent public body established by Emiri Decree and supported by government funding, grants from national and international nonprofits and cultural organisations, corporate sponsors, and individual patrons. All events are free and open to the public.

Sharjah is the third-largest of the seven United Arab Emirates, and the only one bridging the Arabian Gulf and the Gulf of Oman. Reflecting the deep commitment to the arts, architectural preservation, and cultural education embraced by its ruler, Sheikh Dr Sultan bin Mohammad Al Qasimi, Sharjah is home to more than 20 museums and has long been known as a hub of culture in the United Arab Emirates. In 1998, it was named UNESCO's “Arab Capital of Culture” and was designated the UNESCO “World Book Capital” for the year 2019.