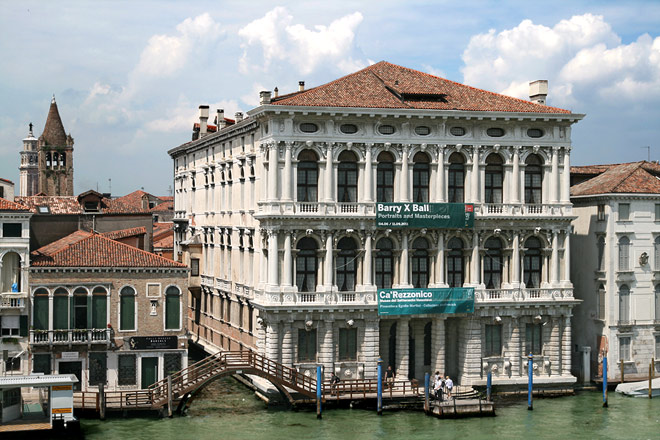 Museum of the 18th Century Venice

The palace was designed by the great Baroque architect Baldassare Longhena for the aristocratic Bon family. Works began in 1649, but Longhena’s death in 1682, and the financial problems of the Bon family left the palace incomplete.

Giambattista Rezzonico, merchant and banker, bought the palace in 1751 and appointed Giorgio Massari to complete the works, which were finished until 1756. While the magnificent facade on the Grand Canal and the second floor followed Longhena’s original project, Massari was responsible for the sumptuous land-entrance, the ceremonial staircase and the unusual grandiose ballroom. Some of the most important painters in Venice contributed to decorate the palace: Giambattista Crosato, Pietro Visconti; Giambattista Tiepolo, who painted two ceilings (Allegoria Nuziale, 1758); Jacopo Guarana and Gaspare Diziani.

The building was fully complete by 1758, when Giambattista Rezzonico’s younger brother Carlo was elected Pope under the name Clement XIII, which was celebrated at the palace in grand style. But by 1810 no family members were left.

After a long period of sales, ownerships, (a.o., the American writer Robert Browning lived and died there) and dispersions of the collection, it was bought by the Venice Town Council in 1935.

With some restoration work, the palace was adapted to serve as the Museum of the 18th Century Venice, opening to the public in April 1936.

Nino Barbantini and Giulio Lorenzetti designed the museum's layout, arranging the works and objects as if they were the palace’s original furnishings, including numerous 18th century works that belonged to other museums or civic-owned buildings of Venice. In the basement, even an apothecary from the 18th century is arranged.

In special rooms, Pietro Longhi's portraits of 18th century everyday life of Venice can be seen, as well as some of the very few Canalettos in Venice (Veduta del Rio dei Mendicanti, 1725), as well as frescos from Villa Zianigo by Giandomenico Tiepolo (incl. Il Mondo Novo,1791 - 1791).

Baroque palace on the Canal Grande

Detail of the facade

View from the garden