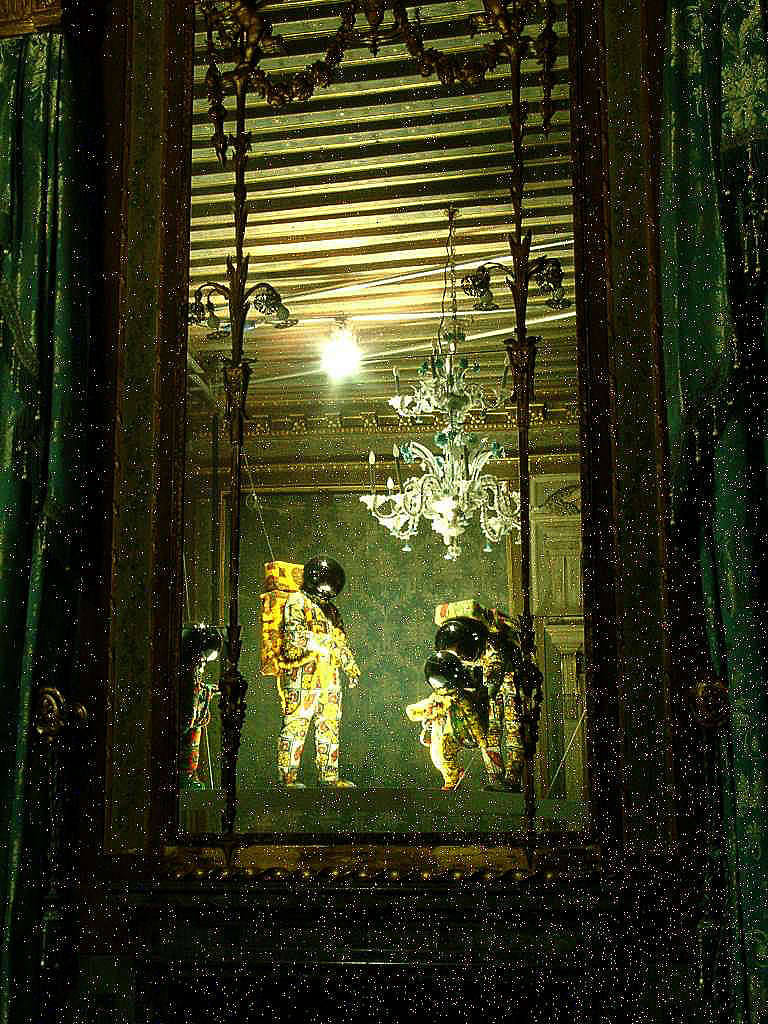 Several of the artists included in this exhibition problematize notions of originality and authenticity. In their work they methodically speak up — even to speak back — to subvert stereotypes of the African experience. A good example is the work of the British-based Nigerian artist Yinka Shonibare, an installation artist and painter recognized for his style of painting on the bright, intricately patterned wax print fabrics worn throughout Africa. These wax print fabrics can be purchased in Europe as ‘traditional African’ handwork, but they are in fact made in Indonesia and the finest of them are imported from Britain. Shonibare takes these ostensibly authentic African fabric and makes Victorian period costume and furniture out of them, as in his work How Does a Girl Like You Get to Be a Girl Like You? (1995) and Victorian Philanthropist’s Parlour (1996). Shonibare, whose work shows a strong aesthetic sense and a sharp wit, casts light on colonial values and lifestyle, while also poking fun at fetishists who believe the fabrics to be of African origin. Meanwhile, he raises serious questions about the authenticity of ‘traditional’ craftsmanship and about the collective memory of the African Diaspora. In his later work such as Diary of a Victorian Dandy (1998), a series of large-scale photographs, Shonibare caricatures Victorian society. The aristocracy are made to look like buffoons, the women swoon, the maids are oversexed, and the artist himself — the center of everyone’s fawning attention — plays the dandy. This element of the work is the centerpiece: an African man living so high in the Victorian hierarchy that all of white society prostrates itself before him. The photographs effectively problematize the idea of Africans as a more ‘primitive other’ within British history and society. The new sensibility and aesthetics generated by the work of many African artists such as Shonibare prove their links to the larger global spaces of contemporary practice.

On first inspection, Yinka Shonibare’s Vacation, included in this exhibition, seems an innocuous play space exploration and its implications for science and human progress. However, Shonibare’s astronauts are dressed in space suits of so-called African wax-printed cotton textile, certainly not the attire normally associated with space travel. The astronauts’ attire evokes the notion of ‘going native’, while speaking to the possibilities of a dominant ‘Other’. Shonibare’s suggestion that one can embody the paradox of alien/other and colonialist/explorer demonstrates the complexity of power dynamics between groups.