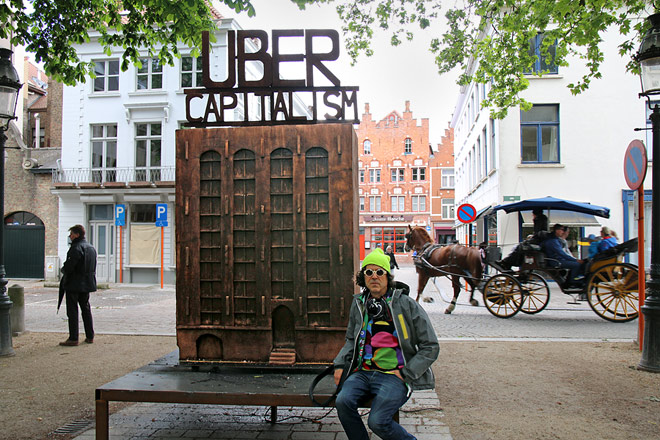 Is this chocolate sculpture a light-hearted, bite-size wink by a playful, deliberately naive artist? Or is enfant terrible Rainer Ganahl making an ironic statement about the economic mechanisms in our soclety? With a miniature replica of the 'Huís ter Beurze' the former Bruges stock exchange, now installed on the Burg.

Much is hidden under the rotating Uber Capitalism above the sculpture. A contemplation of Ubermenschen and services such as Uber that transform a single man into a company. Reflections on capitalism in which rotating logos dominate entire cities. On our new digital economy that generates new riches and a new proletariat. On apps that control our every movement and freedom, anywhere and at all times. Because we are always reachable and therefore always measurable. While we are able to rate and assess everything, we are constantly screened and scanned too. It's worse than Big Brother.

The chocolate of this artwork is as fleeting and transitory as our digital consumption. It is deliciously sweet, but can melt in the sun just like shares in an overheated market. Vandals and heat can damage it. It is entertaining and seductive, but can disappear just like the Bruges stock exchange when the port silted up.

Nothing could hold back the silting process, just as we will not be prepared today if sea levels rise. In this sense the Bruges occupied by this sculpture represents a Bruges that is beyond our time. An embellished, historic Disney habitat, without the metropolitan conflicts that hold the world in suspense.

And the most venomous paradox behind this chocolate is perhaps the fact that cocoa production is still associated with serious forms of child labour and economic exploitation, no different to when it was discovered in the colonial era.

But it was the Belgian chocolate industry that made assembling the expensive chocolate mass possible to create Uber Capitalism. Even art does not escape the reality it exposes.