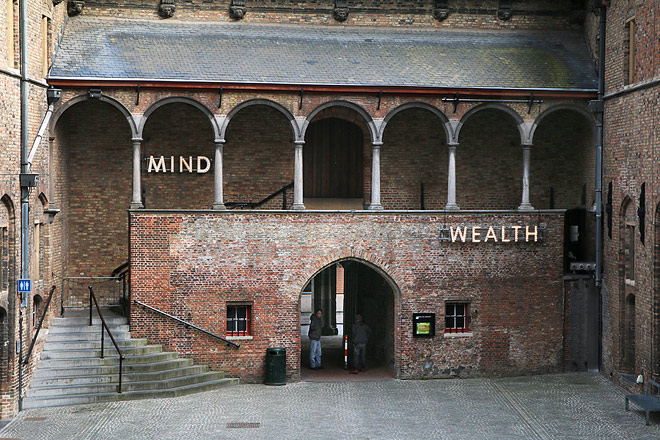 This is the question that the Scottish artist Nathan Coley tries to answer in Bruges with two word sculptures. For the courtyard of the Stadshallen (City Halls) he designed the Palace text sculpture and he displays one of his most famous works on the Burg: A Place beyond Belief.

Palace consists of five illuminated concepts: BELIEF, MIND, LAND, WEALTH and LIFE. The words form an installation that encircles the visitor. You can read them separately or as a phrase, as a compact poem, as a motto for the city or perhaps as a prayer.

Coley deliberately avoids the high-tech world of light and visual advertising. His work exudes a certain nostalgia, a longing for the look of fairground attractions or the Hollywood of the Fifties. Hence the round light bulbs mounted on industrial scaffolding, characteristic of the billboards of the time. This magnifies the ambivalence between the text and the image that it - literally - forms.

Their context - the literally underlying text - is the place they occupy. At the peak of Bruges' wealth, the Stadshallen (City Halls) were where goods, which had often been imported, were traded. And from the balcony of the renowned Belfry behind them, local officials proclaimed a series of city regulations. The fact that Coley's five words are based on the five necessities of life according to Islam obviously increases their charge. But at the same time we can also read them as five key terms that can have an existential meaning separate from any religion or belief.

On the Burg, the geographical and metaphorical centre of the city, Coley exhibits his existing work A Place Beyond Belief. The work was created in New York after 9/11 and serves as a sort of prayer that strives to transcend religion, and that strives to transcend a specific place. This is why Coley enjoys installing it in other cities, which he seemingly connects in doing so. The same words become a different story in a different architectural and urban context. He plucks his words from existing texts, poems, quotes or slogans and transports them to a different reality.